»Hotel«: What actually became of the classic game?

It felt like the board game »Hotel« was lying around in every household in the 1980s. It was also played. But how well has it aged? We looked at the classic and more modern competitors. 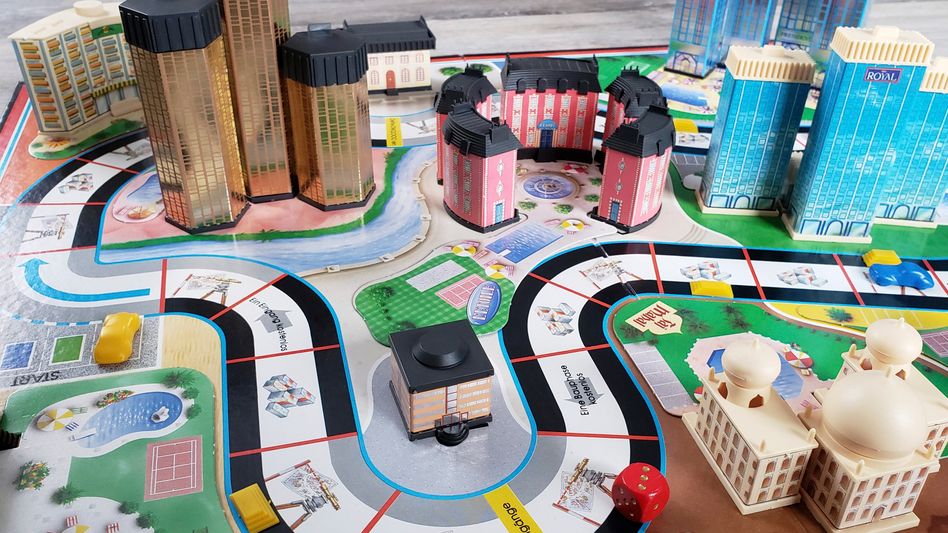 What was it again?

Everyone wants the boomerang and nobody wants the Fujiyama!

The players drive around in circles in their cars, buy land, build spectacular 3D hotels and try to ruin all their competitors.

Chance and the dice determine quite a lot.

Where do I land?

Can I buy someone a piece of land for half?

Do I pay double or nothing at all?

Where do I have to pay rent and, more importantly, how much?

And if you get a six, you can quickly roll the dice again.

Cubes, land, hotels, rent and bankruptcies until only one person is left and runs all the hotels as a monopolist - don't we know the principle?

"Hotel" was obviously inspired by "Monopoly" and was probably also intended by Milton Bradley as a direct competitor product in the mid-eighties.

The game was released by a smaller publisher in the 1970s, but it was not distributed in many countries by MB until about ten years later.

(The advertising slogan "MB presents..." may still ring in some ears.) The first German edition hit the shops in 1986.

Despite the great parallels to »Monopoly«, »Hotel« found many fans.

The game not only looked better, but also fit better into the time of "Wall Street" in terms of gameplay.

»Hotel« offered a number of advantages over »Monopoly«, one in particular: it played down much faster and was usually over in a good hour.

Those who dropped out didn't have to wait forever for the others.

Going bankrupt hurt less, although the foreclosure sale of the Royal including amusement parks or the painstakingly built Waikiki with all the outbuildings could spoil a Sunday afternoon a lot.

Is that still good today?

A graphically completely revised new edition of the game called "Hotel Tycoon" has been on the market for several years.

The hotel buildings were also renamed and redesigned.

Nothing else has changed in terms of the gameplay, except that La Reine (formerly L'Etoile) now only consists of four buildings, before there were five.

The game still looks great on the table.

Even if the schedule is a bit smaller and the hotels no longer look as if they were made from one piece.

The »Hotel Tycoon« box hardly resembles the classic »Hotel« in terms of appearance.

Fans of the original who see »Hotel Tycoon« in stores may not even realize that this is a new version of the classic.

There are just a lot better games out there these days, less luck-heavy and with real choices for everyone involved.

Also, no one has to retire twenty minutes before the end of the game.

Like so many products from the 1980s, the old “hotel” comes with lots of good memories and the comforting feeling of being able to reenact a childhood experience, even with your own offspring.

The game "Hotel" or "Hotel Tycoon" has nothing more to offer today's players.

For everyone who is looking for modern alternatives to »Hotel Tycoon«, we present three current games that serve certain aspects of the game.

If a game is supposed to be about becoming a business tycoon, why not just take an example from history?

About Andrew Carnegie, an American steel magnate and one of the richest people of his time.

He is also known as a philanthropist who has donated over $350 million.

The game "Carnegie" named after him is therefore about building a company that is as successful as possible and at the same time appearing as a philanthropist.

The players invest in American cities and regions, develop the transport network and donate to libraries, hospitals and other charitable endeavors from time to time.

In the end, whoever is both commercially successful and also a benefactor wins.

»Carnegie« is a tough - some would say quite cerebral - strategy game that comes up with a number of good ideas.

The action selection mechanism is particularly clever, as is the use of employees in the players' office buildings.

The fact that these employees can sometimes be ordered to work in the field is new and fresh.

Other aspects of the game like connecting towns or climbing up score bars are well known.

The bottom line is that »Carnegie« is a real chunk for connoisseurs who like to work their way into a complex game.

In the past, successful entrepreneurs might still have made their money in the steel business and built rail networks.

These days, successful people prefer to invest in startups.

It's less tiring and can get you really rich in no time.

In keeping with the theme, the card game "Startups" comes in a small box and is played through in an entertaining half hour.

The game is about investing in six different companies and holding the most shares at the end of the game.

Then the minority shareholders have to pay you out.

Again, the person with the most money wins.

»Startups« is a card game that can be learned quickly and invites you to speculate and bluff.

A bit of luck is needed when drawing from the deck of cards and sometimes you just have bad luck and don't get a majority together.

That's how it is in the start-up business.

The money is not gone, but in the pockets of others.

With 30 minutes playing time, you demand revenge and simply post something on LinkedIn about what you have learned from the first bankruptcy.

»Azul« is the »Game of the Year 2018« and a successful global bestseller.

"Azul: The Summer Pavilion" is a particularly nice variant of the award-winning game.

If you liked »Hotel«, that something nice was built, but would rather make your own decisions than rely on luck, you are welcome to take a look at »Azul: The Summer Pavilion«.

In this game, the players collect colorful building blocks and tinker with their pavilions.

This creates colorful displays over the course of the game.

However, the game is not as peaceful as it sounds, since you have to try to snatch particularly valuable building blocks from under the noses of the other players and leave them useless ones.

The predecessor of this game won several awards for the best game of 2018, so it is beyond doubt.

Azul: The Summer Pavilion retains many of the familiar mechanics of the original (such as building block selection), but adds a little more complexity to the game.

There is a joker color in each round, and you can also earn extra building blocks.

Azul: The Summer Pavilion by Next Move Games;

"Carnegie" is a big chunk of strategy and "Start-ups" is a fast-paced deck of cards.

"Azul: The Summer Pavilion" falls between the two and is well suited for anyone who likes games on the level of "Catan" or "Ticket to Ride".

Open areaWhich products are reported on?

We decide for ourselves which products we report on in the test department and which we test or not. We do not receive any money or other consideration from the manufacturers for any of the test reports.

Test devices and review copies of games are usually made available to us by the manufacturer free of charge for a certain period of time, sometimes even before the official release.

In some cases, if they are already available in stores or online, we purchase test devices at our own expense.

The exceptions are review copies of games and long-term loans: For example, we have game consoles and smartphones in the editorial office that we are allowed to use for a longer period of time before they are returned.

Such products and review samples are often collected at the end of a year, for example, and sold at a company flea market, with the proceeds being donated to charitable causes.

In some cases, review copies are donated directly to charitable organizations.

If a user visits one of these shops via such a link and makes a purchase there, DER SPIEGEL receives a share of the sales in the form of a commission, but never the author individually.