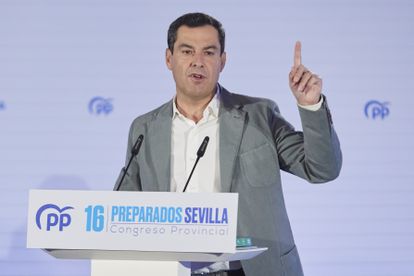 The president of the Junta de Andalucía, Juan Manuel Moreno, during the XVI provincial congress of the PP in Seville, this Sunday.Joaquin Corchero (Europa Press)

The decision of the central government to approve a tax on large fortunes has placed the Junta de Andalucía in a position of defense.

We will still have to wait for the law to be approved with the new fiscal measures announced last week by the Minister of Finance, María Jesús Montero, but the Andalusian president, Juan Manuel Moreno, has affirmed this Sunday that his Government "will give all the battles possible” to defend the fiscal autonomy of the community.

From the Board they understand that the Government's proposal largely deactivates the decree law validated last Wednesday by the regional Parliament to reduce the wealth tax to 100%, a decision that affects only 0.2% of taxpayers, the most wealthy, accounting for just 0.6% of community income.

Moreno is championing not only a position of Andalusia, but also that of the national PP in his race for the final goal: to win the next general elections and get the leader of the PP, Alberto Núñez Feijóo, to replace Pedro Sánchez in the presidency of the Government .

In a certain sense, what Moreno is doing, assuming in the first person the responsibility for the PP to recover the Government of the nation, the Andalusian socialists already did when in 1996 the PSOE of Felipe González lost the elections.

At that time, the Board chaired by Manuel Chaves launched measures to counter José María Aznar's policies, such as supplementing non-contributory pensions or paying for medications excluded by Social Security.

Resources were presented by the PP to the Constitutional Court.

Ximo Puig: "In no case do we propose fiscal policies against the Government"

The Andalusian baron has just won the regional elections with an absolute majority —on June 19— and, according to him, he is limiting himself to complying with the electoral program endorsed by the majority of the voters.

"Witchcraft is fulfilling the agreements," Moreno replied to the criticism that Pedro Sánchez made this Saturday at the La Toja Forum against "the witches who proclaim that money is better in the pockets of citizens."

Both Moreno and the national coordinator of the PP and former counselor of the Presidency, Elías Bendodo, have taken advantage of the closure of the extraordinary congress of the PP in Seville to affirm that one thing is what Sánchez proposes and another, the socialists.

"Many socialists tell me that they do not agree with the reaction of sanchismo", said the Andalusian president.

“Socialism is rebelling against sanchismo”,

Moreno has accused the Finance Minister of creating uncertainty among foreign residents in Andalusia with her proposal to create a new "solidarity" tax on the richest taxpayers.

According to data from the Andalusian president, for the 100,000 foreigners who now spend between two and six months in the community and who, based on information from the "dispatches" could establish their fiscal residence in the community, the decision of the Treasury generates insecurity.

The president of the Board was also in La Toja before closing the extraordinary congresses of the PP in Malaga, on Saturday, and this Sunday, the one in Seville.

These conclaves assume Moreno's absolute control over the provincial organizations.

The one in Malaga has meant Bendodo's departure from the provincial presidency after 14 years, forced by his rise as the PP's national coordinator.

The people of Malaga have opted for a natural replacement —the new president, Patricia Navarro, was the general secretary—;

while, in Seville, an attempt has been made to put an end to years of internal struggles.

When Moreno won the Andalusian elections on June 19, he reached an agreement with the president of the PP in Seville, Virginia Pérez, to provoke an extraordinary congress.

Pérez was elected in March 2021 with 93% of the votes, in a congress convened against Moreno's opinion and endorsed by the national leadership then led by Pablo Casado and Teodoro García Egea.

The result, in a process plagued by complaints of irregularities, opened a gap of mistrust between the national leader and the Andalusian, who made clear his discomfort by not attending the closing ceremony.

Juan Manuel Moreno, in the center, surrounded by Andalusian leaders at the XVI Provincial Congress of the Popular Party in Seville.

The Andalusian electoral result has made it clear where and who is on the command bridge and the popular Sevillians elected this Sunday with 96.4% of the votes Ricardo Sánchez, delegate of the Board in Seville, new provincial leader.

It remains to be seen if the historical Cainism in this organization is diluted.

The province of Seville has always been the Achilles' heel of the Andalusian PP, the ugly duckling that other provinces reproached for its lack of drive and contribution to the regional vote pool.

Along with that of Huelva, it is one of the constituencies where the worst result is obtained.

That circumstance changed in the regional elections in June, when the PP for the first time in 45 years surpassed the PSOE in Seville in an electoral call.

Moreno has taken advantage of this fact to proclaim that "nothing is impossible" and has set the goal of governing the Provincial Council of Seville, the most powerful stronghold of the Sevillian socialists, after the loss of the Junta.

The PP clings to the results of the regional elections in municipalities where they do not have a single councilor and were the most voted (as is the case of Utrera, with some 50,000 inhabitants).