A Russian military transport fuels concerns: is Putin preparing a nuclear mission in the Ukraine war?

In addition, there is an alleged NATO warning of a nuclear submarine.

In addition to the Russian military train, which raises fears that nuclear weapons are being brought to the Ukrainian border (

), there is apparently another threatening action by Russia.

According to a report in the British newspaper

, NATO has allegedly warned its member states that the Russian nuclear submarine Belgorod has left its base in northern Russia.

It is capable of transporting and firing "Poseidon" nuclear torpedoes.

According to a report by RTL/ntv, there is a fear that Russia will want to test this for the first time.

The Russian nuclear submarine Belgorod was launched with a ceremony on April 23, 2019.

However, nuclear weapons expert Andrewfutter stressed to the

that the submarine was not only a carrier for nuclear weapons, but could also serve other functions.

His assumption: With this action, Putin is once again sending a warning to the West not to get involved in the Ukraine war.

reports that NATO has warned its members that a nuclear test on Ukraine's border may be carried out to show Putin's readiness for a nuclear strike.

The Russian government denies this.

"We don't want to get involved in that."

Moscow - Videos and photos on social networks on the Internet show a long Russian freight train loaded with armored vehicles and weapons.

Apparently, the train is on the way from central Russia to the Ukrainian border.

And: It raises fears of an imminent use of nuclear weapons in Ukraine.

British media such as the

report that the train is linked to a branch in the Russian army responsible for providing nuclear weapons.

In the face of repeated threats by the Kremlin not to shy away from using nuclear weapons in the Ukraine war, this is raising new concerns: Is President Vladimir Putin already preparing a concrete nuclear deployment in Ukraine?

According to defense analyst Konrad Musyka, to whom the British media also refer in their reports, this is conceivable but unlikely.

The Polish expert addresses the Russian military train in several posts on Twitter.

According to them, the freight train actually transports equipment assigned to the 12th Main Directorate of the Russian Ministry of Defense.

This directorate is responsible for the storage, provision and transport of nuclear weapons to the Russian troops.

Ukraine-News: Expert puts concerns about the use of nuclear weapons into perspective - "Other, probable explanations"

Nevertheless, the expert reassured: The freight train would "not really" indicate an impending nuclear operation in Ukraine.

There are "other, probable explanations": The videos circulating on the Internet could therefore be another method by Russia to "signal to the West that Moscow is escalating".

The analyst wrote on Twitter: "Believe me, such videos never appear by accident." In fact, the video showing the moving military train was apparently originally published on Telegram by the pro-Russian broadcaster Rybar.

According to the expert Konrad Muzyka, it is also possible that the train is transporting equipment for military exercises.

The defense expert writes that it is possible that nuclear deterrence exercises will be held in October.

Recently, Russia had repeatedly threatened to indirectly or openly use nuclear weapons in the Ukraine war.

In his speech on Friday (September 30) on the annexation of Ukrainian territories, Putin reiterated that Russia will defend its territory “with all the means at our disposal”.

Putin's spokesman Dmitry Peskov, however, qualified the threats on the same day.

However, American experts consider Russia's use of nuclear weapons to be quite realistic.

You can read everything about the military developments in the Ukraine war in the news ticker. 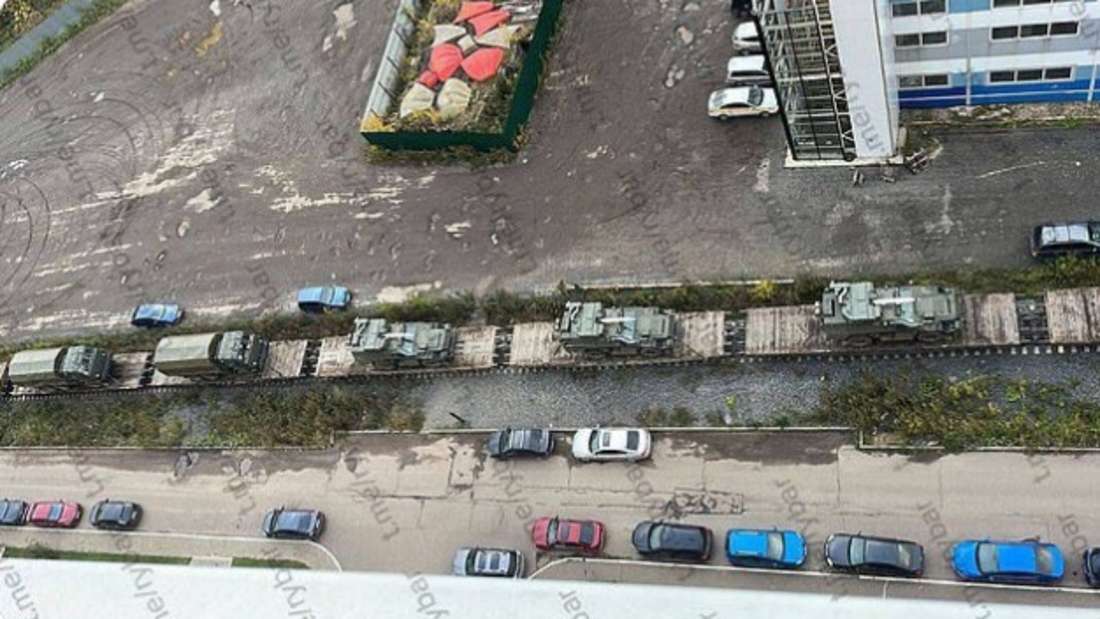 Li Zhiying case︱Leung Mei-fen: Interpretation of the law should be viewed with a normal heart and a learning attitude, not with political eyes
2022-11-28T08:03:58.807Z