Fall heralds the arrival of the Home Depot Skeleton, a massive Halloween decoration that first hit the market in 2020 and has been wowing everyone ever since. 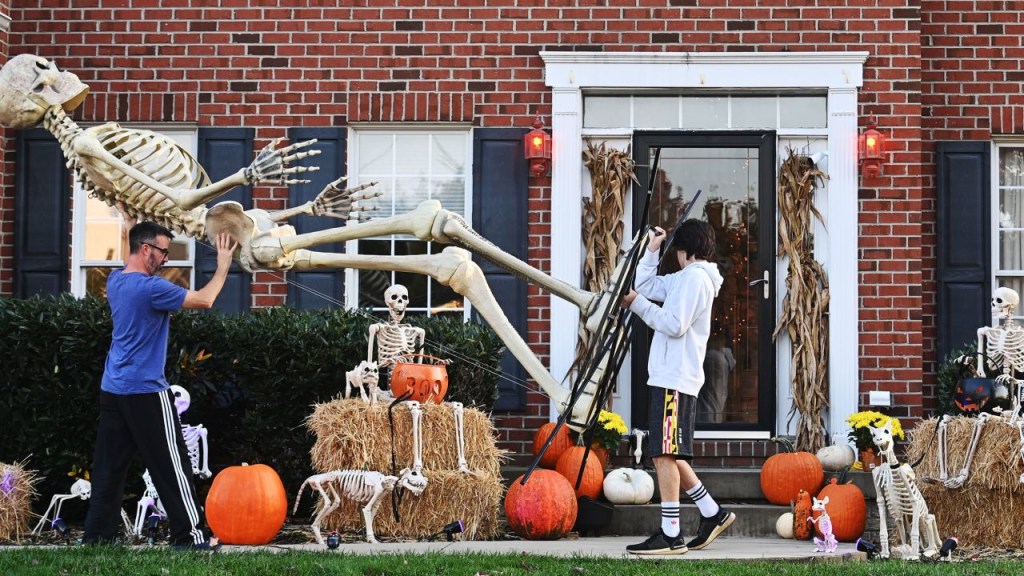 Fall heralds the arrival of the Home Depot Skeleton, a massive Halloween decoration that first hit the market in 2020 and has captured the imagination ever since.

Fondly known as "Skelly," the menacing figure is now something of a mascot for those who revel in the gothic excesses of Halloween decorating.

Why so many people identify with this creature, enough to wipe out entire inventories in hours and spawn a black market in skeletons in the process, is a question best left to a higher power.

Perhaps “Skelly” is a bridge between the extremes of our human nature: pain and joy, hunger and excess, the sacred and the profane locked together in high-density polyethylene.

Or maybe big skeletons are just something fun to think about.

"It's time," says Jenni Tabler, a sociology professor at the University of Wyoming.

She summed up the spirit of the times in a now-viral tweet: "Happy Huge Skeleton Season to all who celebrate it."

Tabler doesn't have a skeleton, but it understands enthusiasm.

"I think for me, as a sociologist, it's very encouraging that we can all come together over some of the little joys in life. And the huge skeleton is one of those fascinating little joys."

Home Depot's singular positive mark on American society is thanks to the unknown hero on some product committee who was like "the people don't know what they want, we will show them" and then gifted us the 12 ft tall skeleton.

Happy enormous skeleton season to all who celebrate.

Jill Troutman, of Memphis, Tennessee, searched for two years before landing her "Skelly."

She had a contact inside her local Home Depot, so when she got a call in September saying the skeletons were back in stock, she ran to the store and quickly got one from her.

Well, as fast as possible, since the skeleton in question comes in a box the size of a Manhattan apartment.

"The box was HUGE," says Troutman.

"I wasn't sure I could get her into my little SUV, but I was going to die trying!"

The "Skelly" is born

A Skelly hovers over a Pennsylvania home.

Other retailers like Costco and Lowes now offer their own giant Halloween monsters, but the Skelly phenomenon was born in the offices of Home Depot in 2020.

According to Lance Allen, Senior Christmas Decor Merchant at Home Depot, bringing Skelly to life was a labor of love.

"What our Christmas decorating team does is go to the market, look for inspiration and see what we can do differently," he tells CNN.

"We went to haunted houses to see what they were doing. We watched all the classic scary movies."

In the end, the team saw a giant torso at a fair, and the gears began to turn.

"We really brought the item to market at the perfect time," he said.

"It was during the first year of the pandemic, when everyone needed to smile."

Although the skeleton doesn't have a name on the box, Allen says people in the office started calling him Skelly and, well, it stuck.

Allen's teams know everything about the culture that spawned their massive creation, from in-store sales to the indefinable charisma people find in their LED-illuminated eyes.

In response to Skelly's success, Home Depot added even more huge offerings: a giant pumpkin skeleton came out in 2021, as well as a 12-foot-tall levitating witch that was inspired by a street artist Allen spotted near the Bellagio Hotel. from Las Vegas.

Skelly's popularity has spawned other oversized Halloween offerings, like a levitating witch and a massive werewolf.

Courtesy of The Home Depot

This year, the retailer debuted a giant werewolf figurine that, at 11 feet tall, looks like it would do just fine on the 18th hole of the city's best miniature golf course.

"What this shows us is that customers are passionate about lush items," he says.

Troutman, for example, is giving his new skeleton (his name is Todd) pride of place among his Halloween finery.

"The whole neighborhood enjoys coming to see our décor," he says.

"I have to rethink the whole scheme because Todd is now the star of the show, with his own special lighting."

"This is our favorite holiday, and everyone knows we don't go for easy. It has to be flawless," Euell told CNN.

The couple's holiday displays draw fans from all over the area, and last year they purchased the 10-foot witch from Home Depot to add to their collection.

(Euell, a woman of good taste, also has a permanent witch-themed bathroom.)

As Halloween passes, Euell and Grimstad have to tackle another critical phase of the Skelly experience: finding a place to store a 10-foot skeleton.

"We decorated it all fall and left it until Christmas. Someone even made it a snowsuit with a Santa hat."

"But it's only for the interior," says Euell.

"I don't think I'll last outside with that." 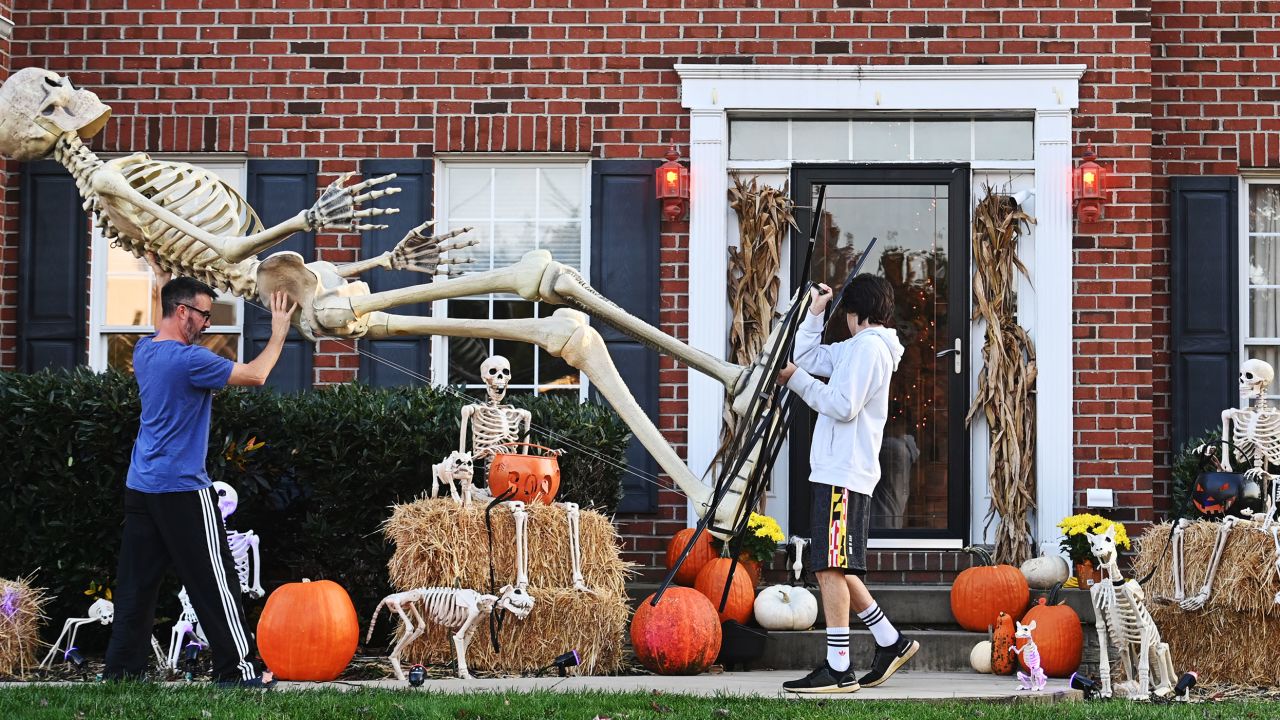 Halloween tricks: snacks, decorations and costumes - how best to prepare 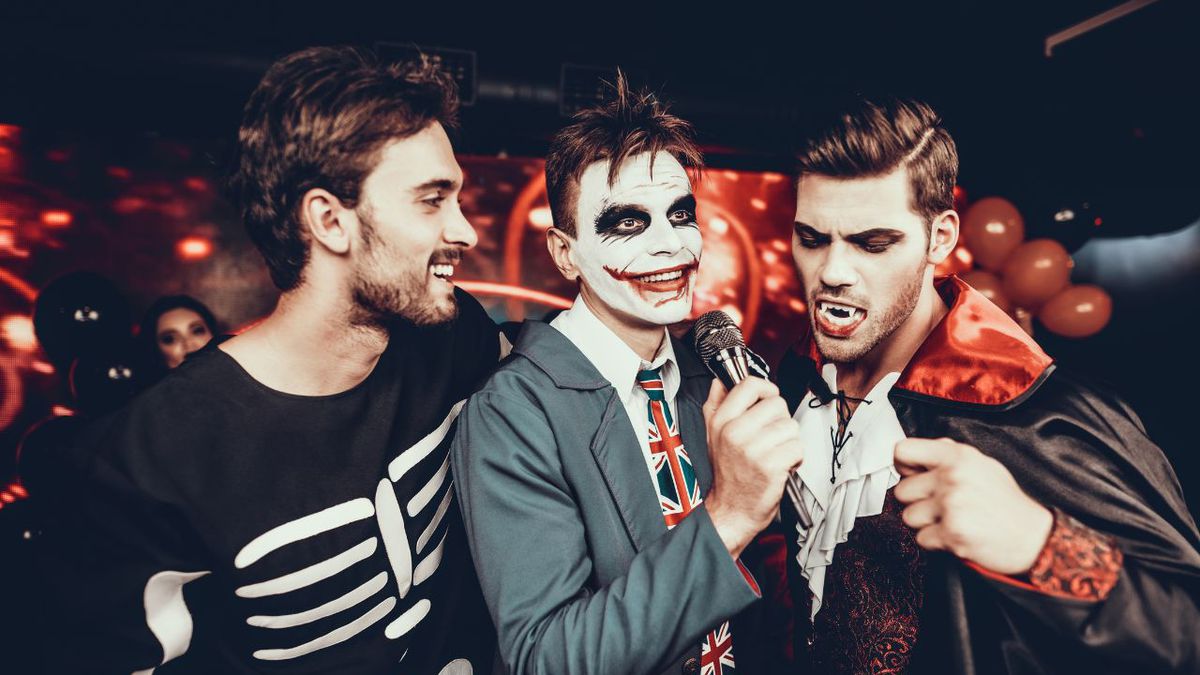 Make autumn decorations yourself: ten creative ideas from the garden