Meteorologists forecast severe weather this week in the US.

A robust new storm system moving into the Pacific Northwest this Sunday could bring severe storms to the southern United States this week. 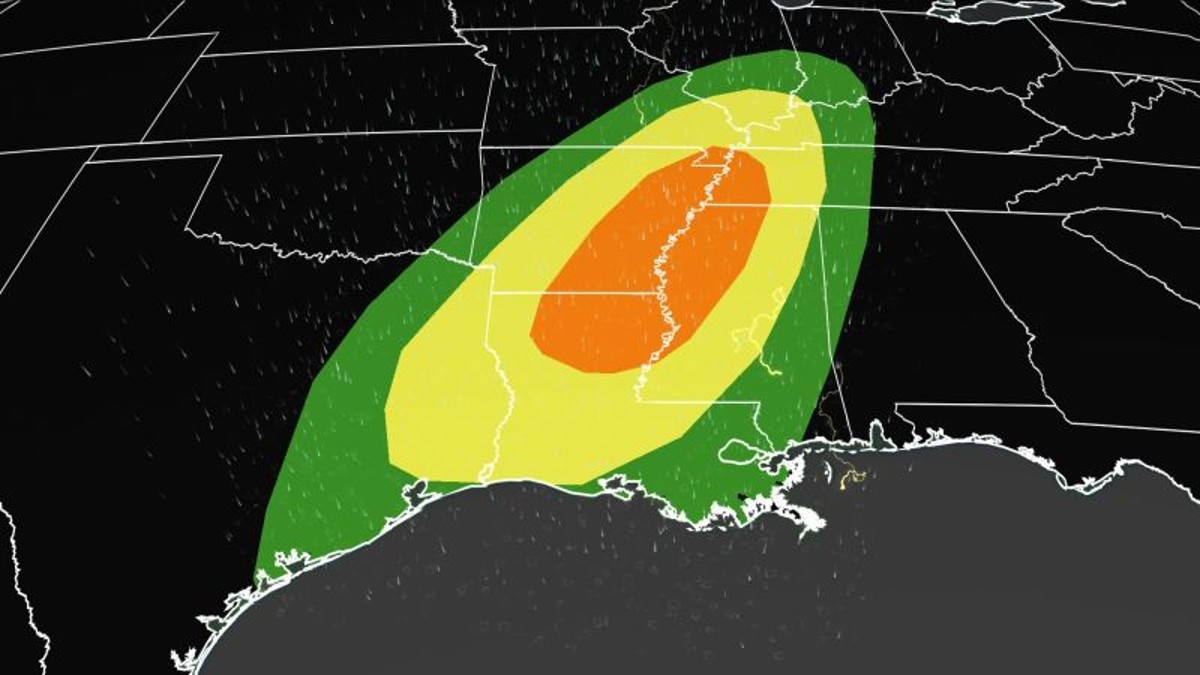 A robust new storm system moving into the Pacific Northwest this Sunday is expected to spawn severe storms in the southern United States this week.

The Storm Prediction Center issued an early forecast warning, calling for "a significant severe weather event" in parts of the lower Mississippi River Valley on Tuesday.

"Details about the areas at highest risk for tornadoes will become clearer as Tuesday approaches and smaller-scale trends become more apparent."

An enhanced risk of a level 3 out of 5 for severe storms has been issued across the region, including Memphis.

However, the largest severe storm threat this Tuesday could affect more than 25 million people from East Texas to southern Indiana.

The prediction center also noted in its forecast discussion Sunday morning that "categorical improvement in later outlooks will be possible," meaning the severe storm threat has the potential to increase to a level 4 or 5 of 5. as Tuesday approaches and the forecast becomes clearer.

Regardless, this week's storms are expected to be strong and potentially destructive.

Be sure to stay up to date on the latest forecast as it unfolds over the next few days.

Deadly devastation due to the passage of tornadoes in the US 4:25

The system is likely to generate tornadoes and destructive winds in the lower Mississippi River Valley after Tuesday night, which can be particularly dangerous.

"Unfortunately, it appears that the severe storm threat will continue through Tuesday night," Bunting said.

The time of day a tornado occurs also makes a big difference in the fatality rate.

Nighttime tornadoes are more dangerous because many people are asleep and don't know they need to find a safe place.

While the greatest tornado threat for this particular event exists during the day, there is still a chance for a few rotating storms during the evening hours.

Areas most at risk for overnight storms Tuesday include southern Illinois to Louisiana.

“Another challenge with nighttime tornadoes, especially in the fall and winter, is that the storms typically move very fast, sometimes 50 to 60 mph (80 to 96 km/h),” Bunting said.

“This means you should quickly make decisions and take shelter based on the information contained in the severe storm or tornado warning, and not wait until the storm hits.”

Bunting noted that another concern will be the possibility of flooding, thanks to heavy rains resulting from repeated rounds of thunderstorms.

Widespread rain is expected to fall in the range of 25 to 101mm, but some isolated places could see up to 100mm.

While tornadoes in the United States can occur any month of the year, they are most common in the spring thanks to the clash of hot and cold air as the seasons change.

The same combination of temperatures also occurs in the fall, so you'll often see a secondary "severe season" later in the year.

“While severe storms occur less regularly in the fall and winter than during the spring/summer months, large bouts of severe weather have occurred during this time of year,” Bunting noted.

"One only has to think of last December and the record number of tornadoes for the month and the tragically high number of deaths."

Earlier this month, a Level 3 severe storm risk was issued three days in advance, before later being upgraded to a Level 4 risk. Dozens of tornadoes were reported across Texas, Oklahoma, Louisiana and Arkansas causing damage to numerous homes and businesses.

If Tuesday's threat increases to a Level 4 risk, it would be the first time two Level 4 risks have been issued anywhere in the US in November.

“You can see that while the spring months are our most weather-active time, there is a secondary increase in tornado activity in November,” the National Weather Service in New Orleans said.

Texas sees the most tornadoes (7) in the month of November on average, followed by Alabama (6), Louisiana (5), and Mississippi (5).

“Severe thunderstorms in the fall and winter can have extreme impact and can sometimes surprise people, as thunderstorms tend to occur less frequently during the colder months,” Bunting added.

“This is the time to review or develop a severe weather emergency plan for you and your family.”

Find out where you'll go if severe weather hits, and make sure flashlights are working and cell phones are fully charged in case you run out of power.