Three large-scale operations in one evening: fire brigades under constant stress Created: 11/29/2022, 06:30 am By: Felicitas Bogner At Reichersbeuern, a liquid manure tank slipped onto the railway tracks. Luckily nobody was hurt. © Fire Department Reichersbeuern There were three major operations within a few hours from Friday in Bad Tölz and the surrounding area. The commanders of the voluntee 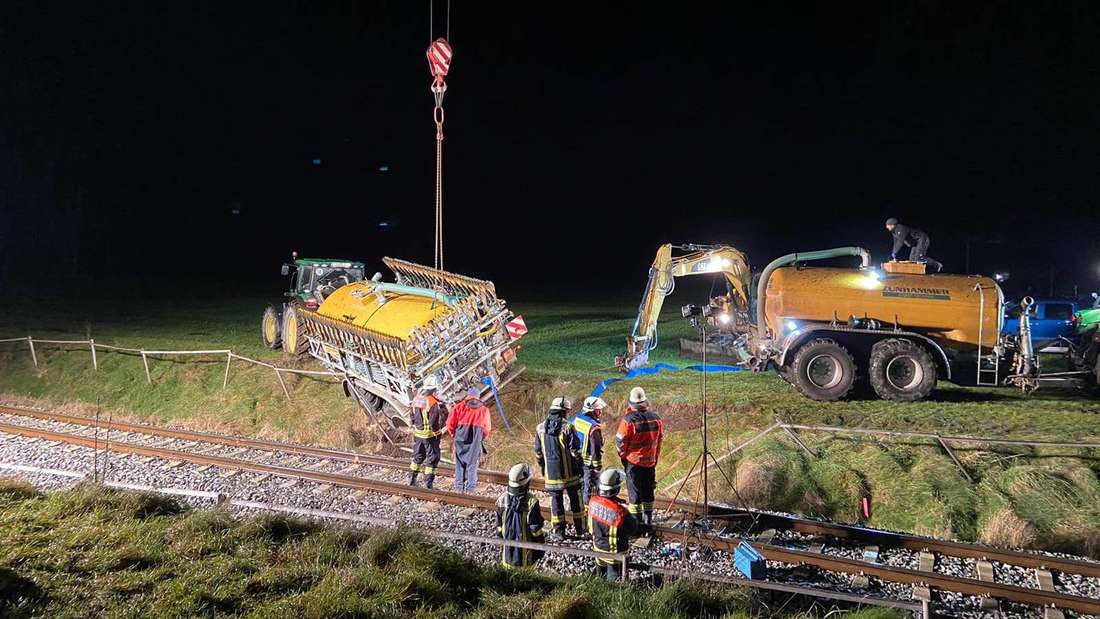 At Reichersbeuern, a liquid manure tank slipped onto the railway tracks.

Luckily nobody was hurt.

There were three major operations within a few hours from Friday in Bad Tölz and the surrounding area.

The commanders of the volunteer fire brigades describe an exceptional evening.

- pure stress and no time to catch your breath: Three major operations in a row kept the fire brigades in Bad Tölz and in the neighboring municipalities in suspense from Friday afternoon: While the emergency services of the Reichersbeuern fire brigade were busy emptying a slurry tank that had slipped off, to then to lift it off the railway tracks with a recovery crane, the volunteers from Bad Tölz, Ellbach and Lenggries had to bring a devastating full fire in a family home under control.

When the Florian disciples had just fought the flames, a serious accident occurred on the B13, with several people being seriously injured.

Despite the overlapping of the accidents, emergency care worked flawlessly.

"Parallel deployments happen from time to time, but three such large deployments in a row are something special here," says Stefan Kießkalt, spokesman for the district fire inspection.

The load on Friday was high for the firefighters.

"But as soon as a new alarm goes off, that's forgotten," says Kießkalt.

The number of operations or the workload: "We are prepared for every situation and were therefore well prepared."

In concrete terms, it works in such a way that the alarms are received by the integrated control center (ILS).

“Each type of assignment is stored here with certain keywords.

Depending on the keyword, you know which equipment and how many people are needed,” explains Fuchsgruber.

"If the ILS records that a fire brigade is still on another mission with certain devices, the nearest fire brigade will be alerted."

A single-family home burned in the Gaißacher Strasse area.

On Friday, the Tölz fire brigade was able to move out to both the house fire and the accident on the B 13.

"When the accident alarm came in, the fire was already out and we were only busy with the clean-up work.

We were alerted for technical assistance.

It would have been different if there had been a second fire," explains the 33-year-old commander.

After all, the breathing apparatus would have to be refilled after the extinguishing work.

According to the police, a total of 130 emergency services were involved in the accident.

"There were a lot of them, but it was also because several fire brigades were alerted due to the increased use.

For example, the people of Bad Heilbrunn were able to move away again quickly,” said Fuchsgruber.

The effort caused by the high volume was still within a tolerable range.

"Of course it was demanding, especially since we all do it on a voluntary basis." In other words: in our free time and without pay.

“But anyone can report to the operations manager if they are at the limit mentally, physically or in terms of time,” he says.

Due to the regular exercises, everyone was well prepared.

"I'm always tense when there are still people in the building.

As soon as it became clear that nobody was in the house anymore, the basics of a fireman actually started.”

Stefan Kießkalt: "We were well prepared"

At the same time, the Reichersbeurer Wehr could not fall back on anything but a rule of thumb.

The liquid manure tank that had slipped into the railroad tracks had to be pumped out and then lifted away.

"Such an operation is something exotic, you arrive and first have to think about how to approach the situation in the most sensible way," says Commander Thomas Eiler.

An additional challenge during the operations was the wet clothing.

Thomas Jaud, commander of the Ellbach weir, reports: "Since it was raining heavily, even the high-tech clothing was damp and clammy at some point." The Ellbach forces did come to the fire station briefly between calls.

But: "There wasn't even time to eat something before we had to leave immediately," says Jaud.

He was seriously ill and threatened with homelessness: This is how Eberhard K. from Walchensee is doing today

Five young people were injured in an accident on the B13, some seriously.

The fire brigades managed everything, sometimes in parallel.

According to his own description, Fuchsgruber left at around 4.45 p.m. and was only back home at around 1.30 a.m.

"After the accident, we discussed the operation, despite the late hour," he says.

This is very important.

"First the man with the bad burns and then the young, sometimes seriously injured occupants in the car accident, that wasn't without it."

"Mentally it grabbed some comrades"

While nobody was injured in the accident on the tracks - the train coming from Tölz braked at the last second - the emergency services in the traffic accident were confronted with worse pictures.

“After this assignment, we too had an increased need to talk.

Some comrades got mentally gripped by it," reports Commander Eiler from Reichersbeur.

For these cases there is psychosocial emergency care in the fire brigades.

"And if necessary, the crisis intervention team takes care of it," adds Fuchsgruber.

"It was there anyway for the first responders and loved ones."

In the upcoming exercise by the Ellbach fire brigade - which was also involved in both the fire and the accident - Friday will be discussed in detail.

"So far, no one has seemed like they haven't put it down, but you never know," says Jaud.

You can work up a lot among the comrades.

“But offering the opportunity is essential.

After all, as a small fire brigade, such large-scale operations are not on the agenda for us.” 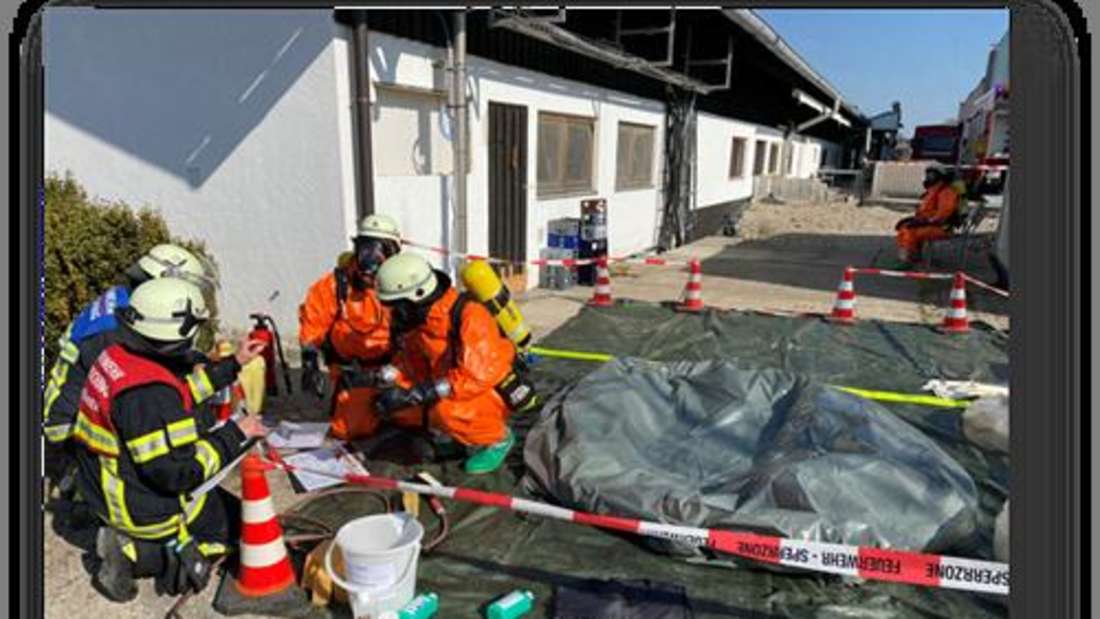 “An impressive statistic”: report from the Herrsching and Breitbrunn fire brigades Prepared for the use of hazardous substances: Echingen fire brigades practice the emergency - video shows the process 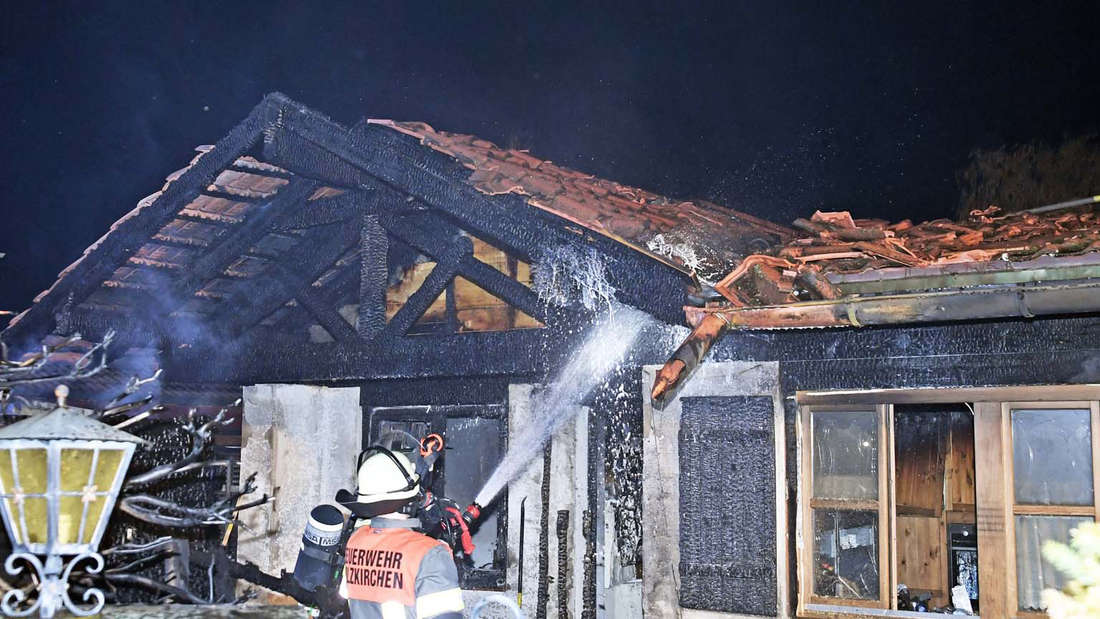 House in Holzkirchen burns out on New Year's Eve

House in Holzkirchen burns out on New Year's Eve