Germany vs. Netherlands: Own goals everywhere

The European Championship qualifier against the Netherlands started badly for the German fans - and in the end it got worse and worse.

The own goal of the day I: No, that does not mean the goal of Jonathan Tah to 1: 2 (more on that later). The fan club of the German national team had spent for the classic against the Netherlands actually the motto "VOLLGAS" and planned a corresponding choreography. Until someone noticed that in social media understandable reasons not really well received.

A half in me says: 'Full throttle is a completely normal word, of course you should not associate it with the NS time'.

But the other half says, 'People you really can not bring' haha ​​.. #GERNED pic.twitter.com/mSjofzUrs4

At the following crisis staff meeting you would have been happy. "Shit, a shitstorm, what are we going to do now?" - "The cardboard is already distributed, we can not collect it." - "For the TEAM neither the letters nor the space are sufficient and we would have to rearrange all the cardboard." - "Let's not make it so complicated, FULL can stop, just GAS is just stupid." - "I got it: we just make EAS out of GAS!" - "FULL, EY?" - "No, VOLLEY!" - "Yes this is good."

The result: a choreography that many people have wondered about.

The first half: As in the past two games against the Netherlands, Germany started well and took the lead. Joshua Kimmich filleted the highly acclaimed Dutch defense with a steep pass. Lukas Klostermann appeared free in front of Jasper Cillessen, but failed with a poor shot attempt. Serge Gnabry did better and dusted off to make it 1-0 (9th minute).

DFB defeat in the European Championship qualification: defeat to the Netherlands

The second half (own goal of the day II): As in the past two games against Germany, the Netherlands strengthened after the break and scored to goals: Frenkie de Jong (59.) made up with a worthwhile goal. Before, Tah had missed a cross by Ryan Babel. A little later Tah hit the ball - and steered him into his own goal (65.). Toni Kroos equalized by hand penalty (73.), before substitute Donyell Malen (79) and Georginio Wijnaldum (90 + 1) decided the match. Four goals in one game - that was the DFB-Elf last five years ago.

The own goal of the day III: RTL has secured the TV rights for the German European Championship qualifiers - and filled the transmission with topics that are relevant to the RTL audience. Before the game Laura Wontorra and Jürgen Klinsmann talked about Christoph Metzelder. There was no time during the break - as with three commercial breaks?

Jürgen, tell us quickly what the child pornography investigations against your ex-player, before we need to advertise. #GERNED

The dumbest hand game in the world: Before the German equalizer for 2: 2 Nico Schulz left was sent steeply. De Ligt paused in between, then complained offside, touching the ball with his arm. In the scene you certainly do not have to give a hand penalty. On the other hand, de Ligt does not have to wiggle his arms wildly in his own box if he does not know where the ball is.

The decision: When the Elftal gets rolling, it can really combine "lekker". So happened before the gate to 3: 2. Memphis played a nice ball through the ball to Wijnaldum after a ball from Matthias Ginter. The lupfte in the middle of the running time painting, which gave the German fans what they wanted to see: a volley.

The consequences: After the 3: 2 away win in the Netherlands, Germany was leaders in the Quali Group C. With a second victory against the strongest opponents of the DFB team could in principle already plan for the European Championship. Due to the first defeat in the calendar year 2019, the team of Joachim Löw fell behind Northern Ireland back to second place. That can change on Monday (9 September, 20.45 clock, TV: RTL, live ticker SPIEGEL ONLINE) but again. Then Germany plays in Belfast. The Dutch are still in third place, but have denied a game less and by the goal in added time the direct comparison against Germany won. A decisive advantage, if both nations should be equal at the end of the qualification.

Germany vs. Netherlands: Own goals everywhere 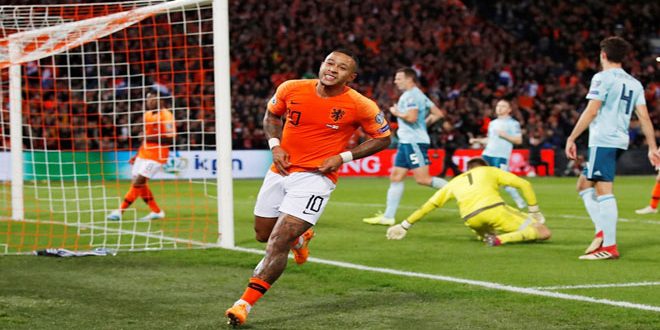 Ronaldo, Messi, Morgan and Rapinoe: the nominees for the 2019 FIFA Best Awards 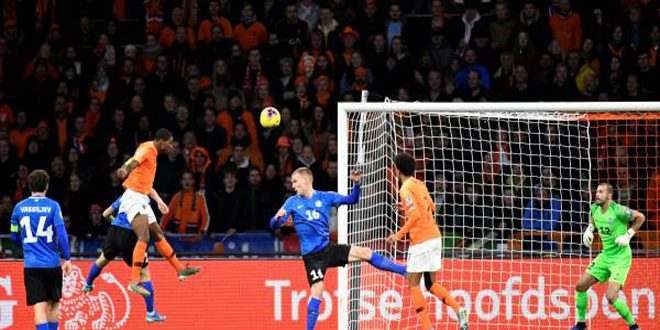 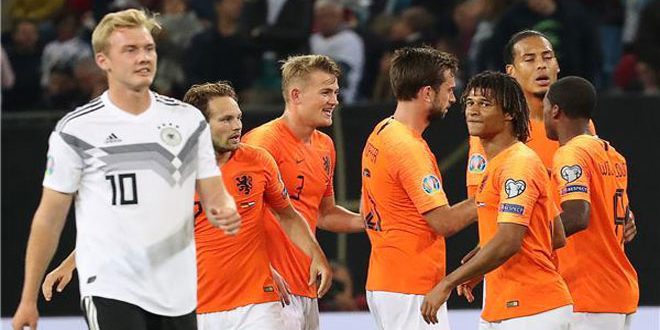 The Netherlands beat Germany 4-0 in the Euro 2020 qualifiers