"I signed with Glatsray because I knew Real might turn up, and I made sure to stay available." "Citizens who have appeared on the team should be given the status of locals in the league." "Can't block Tavares in training." And why does he not remind his friends in Spain of the 2014 final? The Israeli chin in an interview with Walla! sport

Alex Tios: "I wanted to retire at Maccabi Tel Aviv, but I came to Real Madrid to win the Euroleague again"

"I signed with Glatsray because I knew Real might turn up, and I made sure to stay available."

"Citizens who have appeared on the team should be given the status of locals in the league."

And why does he not remind his friends in Spain of the 2014 final?

The Israeli chin in an interview with Walla!

Out of 24 Maccabi Tel Aviv and Real Madrid players, who will go on the floor tomorrow (Thursday, 21:05) at Yad Eliyahu, only one has won the Euroleague yellows in the past - and he will actually wear the blue-pink uniform of the Spanish guest: Alex Tios, the Israeli-American chin, Who at the age of 33 embarked on a surprising adventure in his career, after being released to Blancos from Glatsray.

"The truth is that I was not surprised by the move to Real," Tios surprises in an interview with Walla!

"The team members talked to my agent already during the summer, August and September, and eventually decided to wait and not sign anyone, until they saw what would happen to Paco Campasso. I knew that if I went to the Euroleague team, I could not leave, and I did not want to give up that option. "It's important for me to play somewhere, both to get back on the pitch after last season's shutdown and keep fit, and also so I can move to Madrid when they want me. So I took the risk and chose a seemingly 'smaller' team like Glatsray, leaving the door open."

As in every meeting with Real in recent years, the main focus of Maccabi Tel Aviv will be on Eddie Tavares.

The giant from Cape Verde has a tendency to excel every time he plays against the Yellows, but this time, as mentioned, he will not be alone;

Whenever he rests on the bench, his replacement will go up to appear in front of the ex.

TJ Klein concluded in principle at Maccabi Tel Aviv, may arrive as early as this week

"Maccabi changes its staff from year to year, and that makes it difficult for it to succeed."

The last time he met the Yellows, four years ago, he scored 18 points en route to Glatsray's astronomical victory - 63: 102.

"That was my last game against them? Wow," Tios smiles.

"I mostly remember how everyone talked about it being the biggest loss Maccabi has ever suffered in the Euroleague. I have to tell you that I do not feel particularly motivated ahead of the game. I just came to win, as always, and especially after we lost on Monday to the Red Star Belgrade."

- A year and a half ago, when you left Maccabi Tel Aviv, you told me that "I wanted to end my career at Maccabi, but she played games with me."

"I would have been happy if it had happened, but it was not just my decision. Things did not work out, but I really do not complain about where I am now."

- Of the squad you were on, only four players remain to this day.

"Coach Yannis [Sapropoulos] knows that the recipe for success is to keep as many players together as possible. Over time, Maccabi changes its staff from year to year, and that makes it difficult for it to succeed. This, by the way, is a huge advantage for Madrid. We have been in Real for many years. "

- And when you hear about the laws that are established in Israel regarding citizens, how do you feel about it?

"I do not think it is a good or just thing to discriminate against a citizen and not allow him to work like any other citizen. Beyond that, there are those who played in the national team, and they should get paid for it and play as locals for everything in the league as well."

Tios' addition became urgent after being added to Campasso's departure, Real also lost Anthony Randolph due to injury, and realized she had to change her attitude;

Trey Tompkins, who was shifted to the chin position in most of the games this season, returned to the Power Forward slot - and the Israeli national came to thicken the front line.

"If we hadn't brought him in, we would have 'killed' Tavares," coach Pablo Lasso admitted.

"I do not feel particularly motivated towards the game. I just come to win, as always."

So far, Tios has not been given a real chance to demonstrate his set of abilities.

He was not registered for the Spanish league, and in the Euroleague he contributed 3.3 points and 3 rebounds in just 9:24 minutes in three games.

He enjoys a luxury that no other center in the Euroleague has: he is the only one who does not have to play against Tavares, but is forced to face him on a daily basis in team training.

"Okay, I admit, I haven't been able to block him until now," laughs Tios.

"It's not an easy task, you know. It's amazing to train with a player like that. It sharpens you and improves you as a player. When I came here, I knew I would have to do the little things, like blocks, help on rebounds and defense. I realized I belong to a whole team that already has it all. The pieces in the puzzle, and I will have to fit in. "

You chose Number 7, which used to belong to Campaso and Luca Doncic ...

"Yes, maybe they will ask me to play as a coordinator ... The truth is that I did not think about that point. Number 7 was always my second plan when number 9 was busy, so I wore This jersey is also on the Israeli team and in Glatsray. "

- Did you dare to remind your teammates of the Euroleague final in 2014, in which you defeated Real with Maccabi?

"No, no. I believe they would rather forget about this game. Beyond that, they too have won the Euroleague since, and that's why I came here: I want to swing that trophy again."

Returning to the Euroleague: Alex Tios has signed until the end of the season at Real Madrid - Walla! sport

Mike Carnon, the pioneer of the sports press in Israel - Walla! sport

Real Madrid is expected to add Alex Tios by the end of the season - Walla! sport

"Alex Tios will give Real Madrid what Ante Žižić could not give her" - Walla! sport 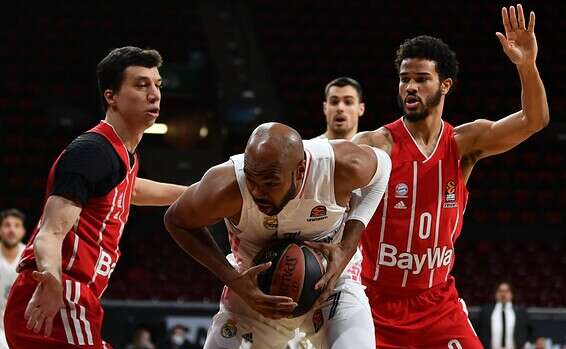 Tios: "It would be great to be back on the team" Israel today

Spain: 9 points and a loss to Dawson, another win for Real Madrid - Walla! sport