The Streif started the weekend with a lot of action - and unfortunately with two falls. The Swiss Urs Kryenbühl was seriously injured.

The Streif started the weekend with a lot of action - and unfortunately with two falls.

What a turbulent Friday it was - with a sad end.

The Swiss Urs Kryenbühl was seriously injured in his fall (concussion, broken collarbone, cruciate and inner ligament rupture), and the race was ultimately canceled due to the deteriorating weather.

The second departure should actually continue on Saturday - but this has now been canceled.

Now it should be driven on Sunday and Monday.

Streif 2021: The result of the Friday departure

The race has now been canceled after the first 30 athletes.

With this, the Swiss Beat Feuz triumphs for the first time in Kitzbühel, the German team achieved a strong team result.

The race on the Streif was overshadowed by two serious falls - first the American Ryan Cochran-Siegle rushed into the safety nets, a little later the Swiss Urs Kryenbühl was hit hard at the finish line.

Both had to be taken away by helicopter.

The second descent will follow tomorrow at 11.30 a.m. - hopefully with better weather and no falls.

We'll be back in the live ticker tomorrow.

There are always interruptions due to the strong wind.

He displaces his compatriot Ferstl from twelfth place.

The overall German result is getting better and better.

Now it goes on.

The Italian Matteo Marsaglia is in 19th place.

The race is interrupted due to strong winds.

In any case, the piste didn't offer much for the last runners.

Beat Feuz will win today's descent on the Hahnenkamm.

It is a good result for the German starters, Andreas Sander will probably keep his fifth place, just like Romed Baumann his eighth.

Josef Ferstl also had a good race, he is twelfth.

21 - Josef Ferstl: The next German is in the running!

At the top he drives cleverly, but at the bottom he has a little too little speed.

The jump to the finish goes very far, and at the finish he is also a little impressed.

“This is Kitzbühel,” he says.

He is also twelfth.

Courageous drive of the Austrian.

But at the bottom he has to struggle with the changed snow conditions and ends up on twelve.

What a shocking moment - the Frenchman already loses his balance a bit in the traverse, he is unsure about the target jump, but can catch himself.

Almost the next fall.

He is in twelfth place.

Nobody wants to be in his skin.

He's the first to chase down the Streif after Kryenbühl.

First and foremost, we wish him good luck.

The American is now driving with the handbrake on - completely understandable.

He's not taking any chances and is three seconds back.

Bad fall in the finish area!

It looked really terrible, the Swiss lost control after the last jump and rolled over.

At least Kryenbühl is conscious.

The doctors are there, the 26-year-old is of course in terrible pain.

Kryenbühl was capable of 146 km / h, you can only guess what forces are at work in a fall.

The helicopter is here.

Kryenbühl will continue to be treated on the slopes and will then be transported to Innsbruck as quickly as possible.

More than four seconds behind the Slovenian - that was nothing.

Really strong performance from the Swiss in the upper section.

It's the next American's turn.

Travis Ganong starts the race again after the fall of his compatriot Ryan Cochran-Siegle.

Ganong is in tenth place.

The first two German starters were already at the ZDF microphone.

Both Romed Baumann and Andreas Sander were happy with their runs.

The fact that they won't make it to the podium is of course a small disappointment for both of them - but tomorrow there is another chance.

The DSV duo doesn't have to hide under any circumstances!

The race is currently interrupted.

Cochran-Siegle lost control after jumping and slid into the safety net.

The American is now back on his feet, he doesn't seem to be injured any more.

Nevertheless, of course, the medical staff is on the spot immediately and the helicopter will fly him to Innsbruck.

There is then an MRI to examine Cochran-Siegle's knee.

The joint is of course always particularly vulnerable in the ski aces.

It's Ryan Cochran-Siegle's turn, the US boy could create tension again.

But it quickly becomes clear - it will not be enough.

And then the fall!

The American loses control after the traverse and ends up in the network.

That was nothing from the Italian - more than three seconds behind the leaders and in the meantime last place.

Frenchman got off to a promising start, but his 145 km / h wasn't enough for him in the end.

After his fall in training yesterday, he is now in fourth place - the Germans are passed through.

The French stepped on the gas and finished fifth - a shame for Romed Baumann, the German slipped down to sixth.

Paris is next, the Italian is also one of the favorites.

Above is a very strong race for the three-time Kitzbühel winner.

A shame for Andreas Sander, who flies off the podium with it.

The French ranks behind the two Germans - now it's sixth for Allegre.

Streif NOW in the live ticker: Baumann and Sander on the move fast - Feuz with a mega ride

Mayer, the Austrian, with high speed in the lower third!

But it's not enough, very close!

In the end, there are 16 hundredths behind Feuz.

The German hope is at the start and that is a good race by Sander - but it is not enough for Feuz, who delivered a fabulous run here.

It is now the second place for Sander.

The Swiss quickly creates a lead.

And it could very well be that it was already the winning run, what a ride by the 33-year-old!

With Max Franz, the next Austrian is on the track and that looks very good.

But then he misses a goal in the lower third and is out!

He could have cracked Romed Baumann here, luck for the German.

Now comes Vincent Kriechmayr, one of the big favorites.

The Austrian remains flawless at the top, but still can't get past Baumann!

That is the first surprise in Kitzbühel!

Streif NOW in the live ticker: Baumann messes up in the U-Hackerl - podium dream already gone?

The German catches the mousetrap well, but fails like Jansrud in the so-called U-Hackerl - bitter!

Is there still something left?

Baumann brings the barrel down neatly and ultimately has exactly one second ahead of Jansrud.

: Best conditions in Kitzbühel, can

The Norwegian starts furiously, but then the mistake comes!

Jansrud loses a lot of time in the upper section and can already bury his chances of victory.

We take another look at the training.

It crackles on the

Even if there will be no mega celebrity party with Arnold Schwarzenegger and Co. this year - there is something magical about this descent.

We look forward to the first race.

Streif 2021 in the live ticker: First descent on the Hahnenkamm - will Andreas Sander manage the German surprise?

: The tension is slowly increasing.

A good hour until the Streif gets going.

First, let's take a look at the start list.

will open the replacement downhill for the failed Wengen World Cup.

attacks as the sixth driver

However, the top favorites are likely to include others.

Today is getting serious!

The first of two runs on the legendary

From 11.30 a.m., the drivers plunge into the Kitzbühel depths.

What is in it from the perspective of the Germans?

steps on the gas pedal: “The goal is a podium,” he says bluntly.

The Germans cut a good figure in training.

Is there a surprise looming there?

Josef Ferstl and Dominik Schwaiger finished eleventh and twelfth in Thursday's training, Baumann only managed 21st place after his seventh place in the Wednesday unit.

But maybe it'll work out on the podium today anyway.

We are in the

Streif in the live ticker: Ski highlight of the year in Kitzbühel

First report from January 21st, 1:32 p.m .: Kitzbühel - curtain up for the alpine ski highlight every winter!

At the weekend there is a lot going on in

, with three competitions taking place from Friday to Sunday on the legendary

Actually there would be a lot going on in

the “place to be” for celebrities of every category every January.

Because of Corona, of course, everything will be different in 2021.

The World Cup will become a

not allowed on the

Since it was made

no different than the other winter sports destinations this World Cup.

The sporting value is still inviolable and that's why we are extremely looking forward to this weekend!

once said: "Your name on the gondola is like a star on the Walk of Fame in Hollywood - only better." As is well known, the names of the winners will be immortalized on the red gondolas of the Hahnenkammbahn - in 2020 the Austrian

Recently, you had to worry that the Streif could be canceled in 2021.

After all, there has been corona chaos in individual ski resorts in recent weeks - the

had to be completely canceled and held elsewhere.

Well, the first impression was good!

In the first training session, four DSV athletes were among the fastest 15.

was sixth on Wednesday, one place better than

finished 12th and 13th. In addition to these four drivers, the

Streif 2021: The schedule for the Hahnenkamm weekend

Hahnenkamm race in Kitzbühel: what are the Germans tearing on the Streif?

, who grew up near Kitzbühel and

before the previous season

, praised the spontaneity in Corona times: “In principle, we were already prepared for such a season in autumn.

It was clear that anything can be possible, but that we will remain relaxed and flexible.

Now a double run in

The fastest in the first of two training sessions was the American Ryan Cochran-Siegle, who was in good shape, ahead of his team-mate Travis Ganong and the Austrian Hannes Reichelt.

The second training run before the races is on the program on Thursday. 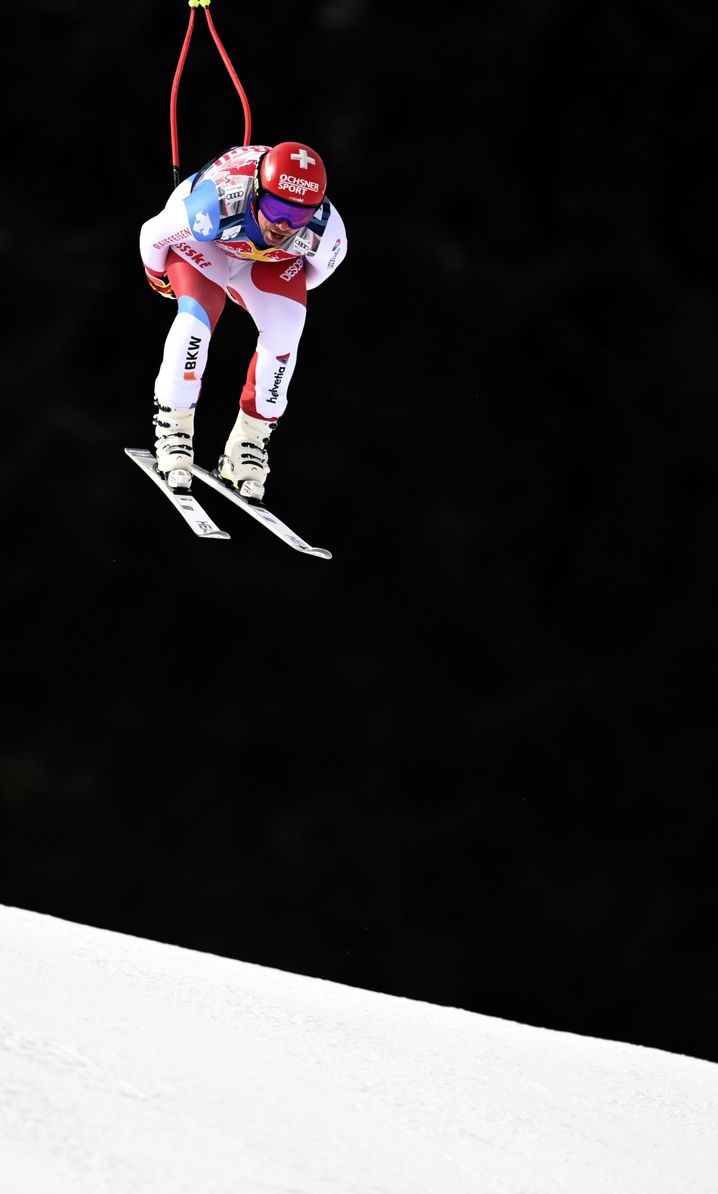