At the Nordic World Ski Championships in Oberstdorf, the team competition for female ski jumpers is on. We accompany the event for you in the ticker. At the Nordic World Ski Championships in Oberstdorf, the team competition for female ski jumpers is on.

We accompany the event for you in the ticker.

The German female ski jumpers, on the other hand, have no chance in the competition with the absolute top of the world.

Katharina Althaus and her flight colleagues did not play a role in the fight for the medals in the second competition of the home World Cup.

In the team competition, the quartet Althaus, Juliane Seyfarth, Anna Rupprecht and Luisa Görlich only took fifth place on Friday in Oberstdorf.

The defending champion's deficit on the podium was enormous.

Austria took gold ahead of Slovenia and Norway.

"It is a shame that it is not enough for a medal," said Rupprecht, who was very satisfied with her own performance and also expects a nomination for the mixed team on Sunday.

“I think Juliane or Luisa will not be good enough,” said the 24-year-old confidently.

Despite the gold medal at the premiere event two years ago in Seefeld and the home advantage on the hill, which is well known from many training sessions, the Germans only started with outsider chances for a medal.

Even when the World Cup kick-off the day before, the best Austrians, Slovenes and Norwegians were much stronger.

On Friday, the top performer, Althaus, showed solid jumps on 94 and 94.5 meters.

That was not enough to endanger the top athletes around Marita Kramer from Austria or the Slovenian Nika Kriznar.

Both are not only strong themselves, but also jump in a much more balanced team.

“The three big ones at the front are very well positioned in terms of breadth and quality.

Nobody is faltering at the moment, ”said national coach Andreas Bauer on ARD.

The first round is over.

Oberstdorf - On the second day of the Nordic World Ski Championships, some decisions will also be made.

After the men's combination, which will take place on Friday throughout the day, the DSV women want to get back on the podium in the team competition from 5.15 p.m., which was last achieved two years ago.

Germany even won the gold medal in Seefeld in 2019, the winning team at the time consisted of Katharina Althaus, Carina Vogt, Ramona Straub and Juliane Seyfarth.

After her poor performance in the individual World Cup, the Olympic champion Carina Vogt was deleted from the list for the team competition on Friday, she described her 30th place as a "debacle".

After serious knee injuries, the 29-year-old had worked hard for the World Cup.

Even before national coach Andreas Bauer announced the squad about the team jumping contest, the disappointed Vogt said that the competition on Friday was not relevant for her.

“I don't offer myself like that, I'm not supportive when I show such jumps.

It would also be difficult for me to deal with the pressure situation, ”said the disappointed but reflective athlete.

In the women's individual competition on Thursday, not only Vogt disappointed, but the entire DSV team.

Althaus landed as the best German in tenth place, her first round prevented a better placement.

So there are still two gold winners from two years ago.

The competition will show whether these can do something against the big competition.

The teams from Norway, Slovenia and Japan are equipped with star jumpers, some of whom made it onto a podium on Thursday. 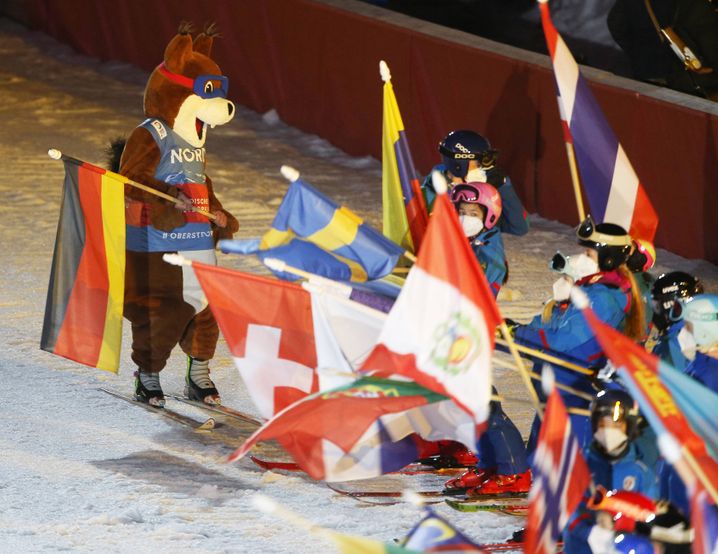 A home World Cup with almost no home advantage

Downhill of the women at the World Ski Championships in the live ticker: Will Weidle get the second German medal in Cortina d'Ampezzo?