DFB Cup: Sancho shoots BVB against Gladbach in the semifinals

Two goals in the Borussia Cup duel did not count, then Jadon Sancho decided the game. While Dortmund are the first club to move into the semi-finals, Gladbach is slipping deeper and deeper into the crisis. 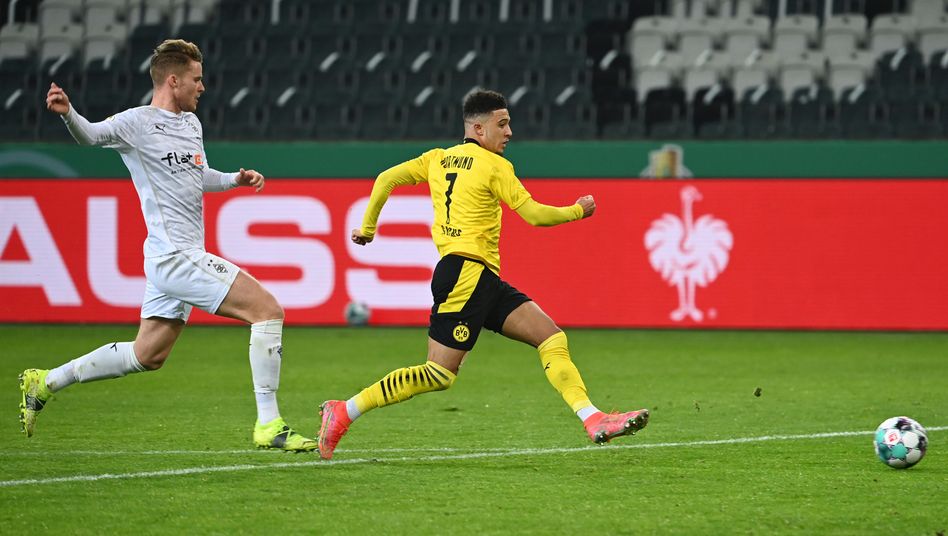 Jadon Sancho at the goal to 1-0

Borussia Dortmund are in the semi-finals of the DFB Cup after a 1-0 (0-0) win at Borussia Mönchengladbach.

Against Marco Rose's team, who will be the new head coach in Dortmund in the summer, BVB only needed a goal from Jadon Sancho (66th minute) in a moderately attractive game.

The Gladbachers, in the league in a severe form crisis and five games without a win, got off to a better start: Ex-Dortmund Jonas Hofmann brought the ball flat in the middle after winning the ball on the right wing, from a little more than five meters brought Marcus Thuram did not hit the ball on goal (2nd minute).

BVB avoided the early deficit, but still suffered a setback.

Left-back Raphaël Guerreiro sustained a muscle injury in a duel that preceded the chance.

The Portuguese had to be replaced, Nico Schulz came into the game for him (5th).

After that, a competitive game developed without many highlights.

Only Dortmund's Erling Haaland appeared free in front of the Gladbach goal after a long ball, but shot past (36th).

In stoppage time of the first half, an alleged hit by Thuram was not recognized, the Gladbach player was offside (45th + 2).

After the break, the intervention of the video assistant prevented the Dortmund leadership: Haaland had shot a counterattack from close range flat into the goal, but before that opponent Ramy Bensebaini kicked the heels (52.).

On the other hand, Bensebaini tested BVB goalkeeper Marwin Hitz seriously for the first time with a powerful long-range shot (59th).

The winning goal for Dortmund came after an opposing corner kick: After winning the ball, Schulz drove the ball forward, BVB countered with quick, direct passes via Haaland and Marco Reus.

Finally, Sancho overcame Tobias Sippel with a low shot, who was in the goal instead of Yann Sommer in the Gladbach Cup games.

The ball hit the net from the inside post.

Haaland then had a great opportunity to make it 2-0, but the Norwegian failed in a one-on-one against Sippel (83rd).

In stoppage time ex-Gladbacher Mahmoud Dahoud flew after a foul on Bensebaini with yellow-red (90. + 2).

The few minutes in excess no longer made a difference: Gladbach won a few corners, but no longer had a great chance of equalizing.

The semi-finals in the DFB Cup will take place on May 1st and 2nd.

The pairings will be drawn on Sunday, March 7th by the former soccer player Bärbel Wohlleben, the ARD sports show will broadcast the drawing from 6.30 p.m.

At this point in time, however, not all semi-finalists will be certain: The game between Jahn Regensburg and Werder Bremen has been postponed after a series of positive corona tests at the Regensburg team, and a new date for the game has not yet been set. "Antisocial and beside it": BVB boss Watzke is completely freaking out HERE - and making a gross corona blunder