Explosive mix: coach Marco Rose plays with Gladbach in the cup against his future employer Dortmund

In the evening Marco Rose could throw his soon-to-be employer BVB out of the cup with Gladbach. That would be manageable for Dortmund. Because the prospects are still brilliant. 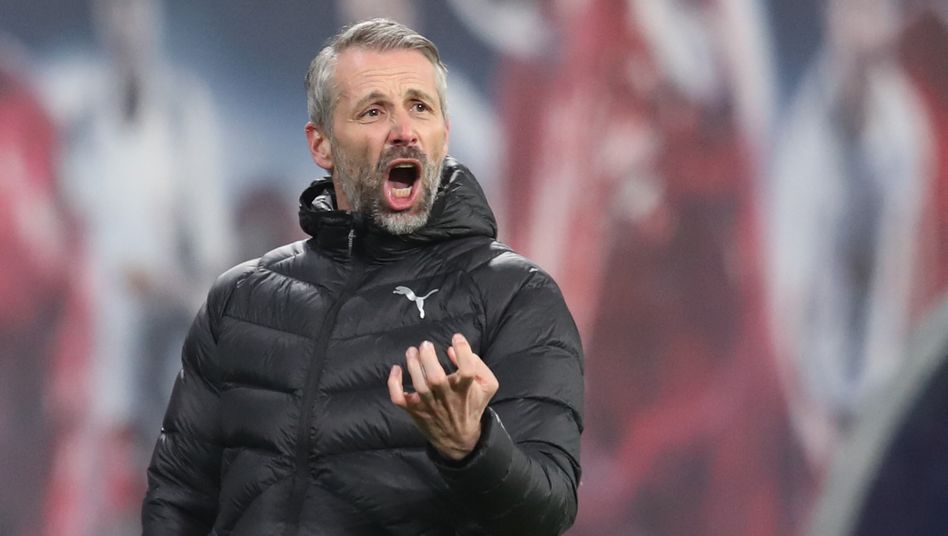 Marco Rose: "Always believe in the chance to win, no matter who the opponent is"

Marco Rose was recently asked to describe to the Guardian how one of Marco Rose's teams plays football.

"It's always active, whether it has the ball or not," he said.

“It presses the enemy very early.

If we have a direct chance of a goal, we use it, if not, we keep the ball - but not in a way that it lulls us to sleep. «The ball has to move quickly, the opponent has to start moving.

You always have to play with the belief that there is a chance to win, no matter who the opponent is.

When Hans-Joachim Watzke was asked after the separation from Lucien Favre why Edin Terzić got his office, he said that he was interested in "a certain kind of football": "an action-packed and probably courageous one".

It is often said that Borussia Dortmund and its managing director Watzke are longing for a second Jürgen Klopp, with whom BVB won their last championships so far, in 2011 and 2012. On its website, the club describes itself as an “intense football experience”, that sounds more like that too after Klopps then after Favres BVB.

Actually, the quality of the coach in Dortmund was never a problem even after Klopp.

Under Thomas Tuchel, Favre and even in the season in which Peter Bosz had to leave, the club always reached the Champions League.

But that didn't seem to be enough.

Tuchel was not doing well.

The club separated from Favre after winning their group in the premier class and missing two points in fourth place in the Bundesliga.

There are currently three.

In Rose, the club could have found a coach who is sufficient for them in every respect.

His appearance should satisfy the difficult-looking BVB environment, his game idea is as energetic as that of Jürgen Klopp.

Above all, Rose is an excellent coach.

In the evening he becomes a hurdle for BVB.

Then Dortmund's present meets its future.

In the quarter-finals of the DFB Cup, BVB will play at Borussia Mönchengladbach (8.45 p.m., TV: ARD and Sky, live ticker SPIEGEL.de), the club whose coach Rose will change sides for the coming season.

Rose as a footballer in Mainz: trained by Klopp and Tuchel

The footballer Marco Rose once played in Mainz under the coach Klopp.

He gained his first coaching experience at RB Salzburg in the youth sector.

Both as a player and as a coach, Rose often found herself in an environment that was about similar elements, about pressing and fast play to the top.

At Red Bull, the game idea was predetermined, there was even a system that should play as many teams as possible.

When Rose worked in Salzburg, he and his assistant coaches René Marić and Alexander Zickler did something adventurous: They deviated from the Red Bull path.

At least a little.

And he expanded his team's game.

She seemed to adapt more to the respective opponent, let the ball circulate longer when it was necessary.

So he turned the RB way into a Rose way and won two championships with the professionals.

In addition to Gladbach, some other ambitious Bundesliga clubs are said to have been very specifically interested in Rose.

For years before, the league had mainly head coaches who were specialists in the game phase against the ball.

His Borussia is one of those teams that know what to do in every phase of the game.

When the Gladbachers lost to Manchester City in the last sixteen of the Champions League last week, they still looked cool against pressing City strikers in many situations.

And in games against Bayern, Rose's eleven recently looked good because they themselves played a demanding pressing, with long paths that required trust in their own plan, and which were implemented by the professionals.

Gladbach became difficult for opponents to grasp because the team could change formation during a game, but above all the attackers themselves opened up spaces for each other with coordinated running paths.

A striker comes towards the ball, another starts in the now vacated zone, that is a pattern that can often be observed at Borussia.

When building up the team seems patient, if it has to be, but as soon as an opportunity arises, it tries the through ball.

Much of what sets Rose's current Borussia apart fits not only with how BVB apparently imagines its football, but also with the current squad.

The team has strong defenders who had tried under Favre to play flat even under pressure from the opponents.

Both Borussia usually do without high flanks, they rely on flat combinations.

Both attach importance to earning good final positions instead of hastily looking for a shot on goal.

A key qualification for Dortmund trainers is working with talented people.

BVB's transfer strategy in recent years has been shaped by buying young players who have been developed and sold for a profit.

Ousmane Dembélé is the best-known example, another young professional, Jadon Sancho, could leave the club with a big profit in the summer.

A part of this should then flow back into the purchase of new talent.

Rose and his team of coaches have shown in Salzburg what hand they have in dealing with young footballers.

They won the Youth League with Salzburg's U19s, they also worked with many very young players among the pros, and Florian Neuhaus, for example, has recently developed so well in Gladbach that he became a national player and there is speculation about a move to FC Bayern.

At BVB, for example, Jude Bellingham should be one of the winners of the coach change.

The 17-year-old moves cleverly across the field, has mastered challenging passes and has already been used regularly this season.

The chance that he will develop into a player at the highest level is great.

It has even grown with the future team of coaches.

But that's the future.

In the present, both clubs are about the cup semi-finals in the evening, but also about more: about saving their own season, which both clubs started properly and could end in desolation.

At BVB without reaching the Champions League ranks, at Gladbach in the Bundesliga no man's land.

They seem more nervous in Gladbach.

BVB got their dream coach for the coming years, the other Borussia have to replace him.

Since Rose's move to Dortmund was announced, his team have lost all three games.

BVB has only won since then.