The Maccabi Tel Aviv coach breathed a sigh of relief after the 77:80 over Hapoel Tel Aviv in the derby. On Scotty Wilbkin's bad ability: "He will come back again"

Sapropoulos: "Not happy with the ability, but in the derby we have to win"

The Maccabi Tel Aviv coach breathed a sigh of relief after the 77:80 over Hapoel Tel Aviv in the derby.

On Scotty Wilbkin's bad ability: "He will come back again"

A hard win in the derby.

Maccabi Tel Aviv breathed a sigh of relief tonight (Sunday) after the hard-fought 77:80 victory over Hapoel Tel Aviv in the derby.

The Yellows reached the rematch from the second round after the victory over Valencia in the Euroleague, were caught unprepared in the opening by the opponent who ran away to a double-digit advantage.

The Sapropoulos players managed to come back, falling behind again big time but luckily got a wonderful game from Chris Jones, who set a career high in the yellow uniform (26) and saved his teammates from an embarrassing home loss to the Reds from the bottom.

On the other hand, Danny Franco and Hapoel Tel Aviv count their fifth loss in a row and come out disappointed after leading most of the minutes of the game.

The club are waiting for a second opinion on Tillman's injury, as it is still unclear when the inside player will be able to return.

In addition, there is a big disappointment in the team from Gabe York, who is expected to be the one to pay the price if the team finds a replacement guard by March 18.

Maccabi Tel Aviv coach Yannis Sapropoulos: "We are not all happy with how we played, but when you play a derby what is important is to win, especially when you are not playing well. When you do that, it means you are a great team. We did not start well, we were not fresh in attack. "We were not fresh defensively, that was the main reason we did not play well in the first half. The crowd had a part in the victory because they encouraged the whole game, I am glad we gave them the victory."

The coach referred to the poor ability shown by his players in most of the minutes of the game: "This is our 50th game this season, it is not easy to constantly press on the whole pitch, we have to give full energy and we play game after game, Hapoel had two weeks to prepare for this game. In terms of energy, our pressure is effective, we try to push. "

On the shouts he hurled during the game at Wilbkin: "Scotty is not God, he is a human being like everyone else, the player has ups and downs, he is not in our best period, he tries, morals, he was not great, but he helped the team. "It adds to their performance and when you get to the end of the season it makes sense that there are ups and downs, there are periods that will not be in the best period. We will have to give him a rest, he will come back again, it's a matter of time."

Was close to an impressive away win in the derby.

: "CSKA also led by 20 points in the third quarter.

Defensively, we did a good job, but this is not something Maccabi has not encountered before, against better teams.

We can not surprise them, at the level of commitment and energy and upheavals.

Our fitness is manifested game after game, when we reach the end, we lose tools.

We did not enter today with enough players into the game to do the things we expect them to do.

Their excess of tools has increased. "The

coach is satisfied with the ability his players displayed:" We did not come here as a missing team but as a proud team, we took bets but it is not enough to win here.

The ultimate difficulty is of the players continuing throughout the season with these injuries.

We have to put things aside, that's the reality, whoever deals with it has to deal with it, and whoever does not, has to sit outside.

We need to be from game to game better, I understand the frustration and disappointment from this game.

We wanted to look good today, it was important to me that we play with pride. "

Confused Sapropulus: "We do not know which opponent to prepare for" - Walla! sport

Maccabi Tel Aviv is expected to exercise the option on Chris Jones for next season - Walla! sport 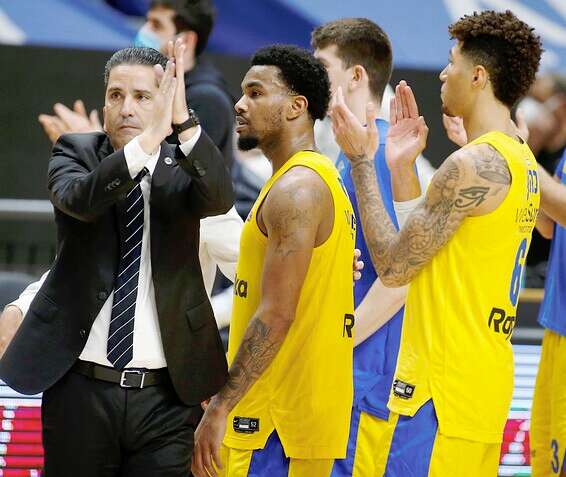 Maccabi Tel Aviv is delighted with Caspi's leadership and confident: Sussman will benefit from the bench - Walla! sport

Sapropoulos: "I do not think we need to do anything different towards Holon" - Walla! sport

Yannis Sapropoulos compliments Zizic: "He was down, and now he's up again" - Walla! sport