Mouctar Diakhaby, a giant against racism

The French central Valencia left the game against Cádiz due to a xenophobic insult from Juan Cala Sitting in the stands of the Ramón de Carranza, with his mask on and still dressed in short, the image of Mouctar Diakhaby (Vendome, France, 24 years old)it reached all the ends of the soccer planet. Minutes before he had said "enough". He had refused to play because Juan Cala, the Cádiz center-back, had called him a "shitty nigger", according to the conversation with the Valencia player that the

Sitting in the stands of the Ramón de Carranza, with his mask on and still dressed in short, the image of Mouctar Diakhaby (Vendome, France, 24 years old)

it reached all the ends of the soccer planet.

Minutes before he had said "enough".

He had refused to play because Juan Cala, the Cádiz center-back, had called him a "shitty nigger", according to the conversation with the Valencia player that the referee picked up on the match report.

Diaka's furious reaction, as this insecure giant with the face of a child and easy smile is called in the locker room, is explained by her ideology of zero tolerance for racism.

In the locker room they know and understand it.

Like her tutors at the club, first Geoffrey Kondogbia and now Eliaquim Mangala, Diaka is very committed to fighting racism by taking advantage of her profession.

Of Muslim religion, Diakhaby leads a very quiet life with his wife and son Ibrahim, barely one year old.

He hardly leaves the house other than to go to training.

She is distracted by listening to French rap and playing FUT Champions, one of the game modes available within FIFA 21 Ultimate Team. Diaka goes berserk when a special card from her appears in the game.

It is common to see him with the Parisian Levante UD midfielder, Mickael Malsa, to whom he has recently loaned a car and with whom he shares many affinities, including clothing.

Before every game he has a habit of shaving his head with a razor blade.

To explain Mouctar Diakhaby we have to go back to the stage of Marcelino García Toral in Mestalla.

Diakhaby hasn't been the same player since Marcelino left.

With Javi Gracia, he has reminded the central defender that the Asturian weaned on several occasions, but the regularity and reliability he achieved with him have not returned.

They were not private classes to use, but the Asturian coach spent a lot of time in the sports city of Paterna so that the Frenchman will gain confidence or self-esteem, and learn to coordinate his meter ninety-two in height without strikingly trampling any opponent.

“Marcelino, he trusted me a lot.

I wasn't afraid to get on the big dates.

He is a coach who marked me.

It made me evolve in many things, "said the center-back this week in Onze Mondial magazine.

In the first months of the 2018-19 academic year, it was common to see Marcelino correcting the French.

Trained at the Olympique de Lyon Academy, the young Mouctar thanked Marcelino for his dedication, who gave him, as soon as he arrived and during his first season at the club, a good load of videos on a memory stick that he carried every week with new material.

As a diligent student, Diakhaby soaked himself in the videos edited by the coach and corrected his shortcomings when it came to shaping and positioning himself tactically.

With a privileged physique and an imposing stature to play as a center-back, Marcelino detected, despite his experience in the Champions League, that the Frenchman was green in different facets of the game.

There are technicians in Paterna who keep thinking the same thing.

When Peter Lim smoked Marcelino, Mateu Alemany and Pablo Longoria, the team fell apart and Diakhaby was one of those who suffered the most from the blow.

He lost concentration, and mutated into an uncoordinated and failing footballer who did not know how to hide his hands.

With Albert Celades there was no chemistry.

"I was not efficient at the beginning of the season and preferred other players," explained Diakhaby in Onze Mondial, who acknowledged that he had no relationship with the Catalan.

"I was trying to communicate with him, but it was quite complicated," he said.

Three consecutive penalties, two against Atalanta at Mestalla in the Champions League and one in the league against Levante, demoralized him last season.

“That is the worst moment of my career, by far.

I know those games turned out badly for me.

I made mistakes and several penalties.

When you have little confidence, you can make more mistakes, "he admitted Tuesday in Diario AS.

His signing was risky because of his age, 21 years, because of the operation, 15 million euros plus two in variables, and because after playing 34 games in the elite in his first campaign with the first team from Lyon, 2016-17, and stand out in the Europa League, he came from a season marked by irregularity.

He signed until June 2023 with a termination clause of 100 million euros.

Among the fans, the striking tracksuit is still remembered, one of his favorite clothes, with which he landed in Manises.

In Lyon they spoke of him as the successor of Samuel Umtiti, also trained in the OL quarry. After the insults targeting a French defender in La Liga, Zidane advocates "zero tolerance" in the face of racism Tebas plays down the situation, Diakhaby doesn't care on Instagram 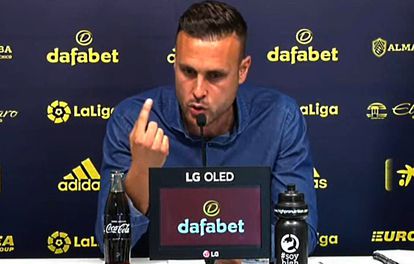 Liga: no racist insults towards Diakhaby according to La Liga report