Bayern draw against Union: With heavy luggage to Paris

Bayern can get over the missed win against Union, what counts is the upcoming Champions League duel with PSG. A season highlight, actually. But the people of Munich seem tired and annoyed.

Bayern professionals during the game against Union Berlin

David Alaba had the last chance.

In the fourth minute of stoppage time, the Austrian was in a good position.

Central and largely unrestricted, he shot from just outside the penalty area with his strong left foot on goal - and then the net floundered.

But only because the ball landed on top of the goal net.

It was a good fit for this 1-1 draw against Union - and for those strange Munich days that FC Bayern couldn't rely on their much-conjured upset.

A lot of things are not going well at Bayern Munich at the moment, both on the pitch and in terms of the public image.

The record champions don't have it easy and make it difficult for themselves.

And that of all things in what is perhaps the most important week of the season.

The best of the 28th Bundesliga matchday from Bayern's point of view: They are still five points ahead of second Leipzig - thanks to the 1-0 (1-0) in Leipzig on the 27th matchday.

You still have the best chances of winning the ninth championship in a row.

But that is the minimum for this club.

He actually wants to go higher, preferably to the Champions League final.

There is the quarter-final second leg at Paris Saint-Germain on Tuesday, Munich have to catch up 2: 3.

Knockout games in the premier class against opponents who are on an equal footing are among the highlights of a Bayern season.

It is the games in which it is not known beforehand who will win;

in which Bayern have to reach their limit - otherwise they are out.

The games that fans and professionals alike should look forward to the most.

But there is little evidence of this at the moment, on the contrary.

In the past, the Bayern team was often characterized by the fact that, even after defeats and a difficult starting position, they broad-chested demonstrated their belief in the opportunity.

And in this situation they now have to defeat one of the best teams in Europe.

In the ongoing dispute: Hasan Salihamidžić and Hansi Flick

The many failures and ailing players are one reason for the bad mood.

On Saturday against Union, coach Hansi Flick did without nine regulars, which is why Tiago Dantas, 20, made his starting eleven debut in midfield and Josip Stanisic, 21, celebrated a solid professional debut in left defender position.

Certainly: Flick will have spared some players.

Against Union, however, Kingsley Coman and Jérôme Boateng had to leave the field prematurely.

After all, Flick said after the game that he wasn't very worried about her appearance in Paris.

And yet: Leon Goretzka's comeback on Tuesday is unlikely.

Lucas Hernández is still in question, and a miraculous healing that Robert Lewandowski had hoped for was an unfulfillable wish from the start.

Another reason for the unrest is obvious: the unexplained future of Hansi Flick.

The coach also looked irritated on Saturday when he was asked on the Sky microphone before kick-off whether he intended to fulfill his contract by 2023.

As on Friday at the press conference before the Union game, Flick refused an answer and a clear confession, this time too he only replied: "Next question."

Flick had announced the day before that he would always use this formulation in the future for questions that he considered inappropriate, for example when it comes to his plans beyond the season or the ongoing dispute with sports director Hasan Salihamidžić.

And Flick's phrase could be heard a few more times on Saturday.

When asked if he would stay in Munich if the club split up with Salihamidžić.

Or when people asked why it was so difficult to make a clear commitment to the club.

Flick's lack of commitment could unsettle the team

It may be the coach's goal not to cause further unrest.

But it is to be feared that he will achieve the opposite with such performances.

The longer Flick evades a clear statement, the longer the whispering speculations last.

Is he going to the DFB to inherit national coach Joachim Löw?

Will he stay in Munich?

Another question is currently also floating in the room: Are the lack of clarity unsettling the team?

Is it harming her?

Manuel Neuer replied to the question of whether the coach's unclear future was bothering the players: “All things that hit us from outside are not necessary.” And further: “I think Hansi Flick is the right coach for us.

You have seen how successful we have been together recently, and we would be delighted if it continued like this. "

The players have it in their hands that the success will continue.

Moving through in Paris would be an impressive result.

That the success with Flick continues is another matter.

What if Bayern were to retire in Paris?

Then it could have been with Hansi Flick and FC Bayern in the Champions League.

Which doesn't just mean this season.

FC Bayern versus Union Berlin in the live ticker: Flick with personnel worries before the duel with the "Iron" 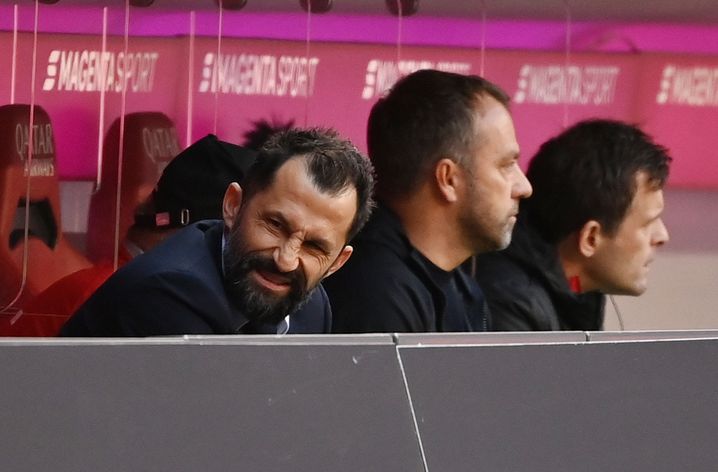 Bayern draw against Union: With heavy luggage to Paris