PSG had chances for three games, but the 0-1 was enough for them to advance. Bayern failed honorably, for three players it is a farewell after a long time.

In the 39th minute, Angel Di María, Kylian Mbappé and Neymar combined over the entire field, a play like in a dream.

In the end, Mbappé served the free-standing Neymar, who pushed the ball past Manuel Neuer as the crowning glory - to the post.

A scene that was painted for the whole lot.

In return, Bayern made the opening goal.

Bayern had never won at Paris Saint-Germain before, this time after four defeats.

And yet this 1-0 success through the goal of ex-PSG professional Eric Maxim Choupo-Moting was a disappointment.

Because of the 2: 3 from the first leg, the success was not enough to advance.

The away goals rule also applies when home and away games no longer play a major role.

Bayern had great chances in the first leg, they missed them, and Paris won.

This first half was a mirror of the game when you consider that everything is shown upside down in the mirror.

This time the PSG offensive outdid itself in missing opportunities.

Bayern were mercilessly efficient and scored with their first really big chance.

And suddenly it was very close, the drama of Paris.

PSG opened again with a big chance for Neymar, then the game changed.

Bayern, already disciplined, calm, cool, got the game in their hands, but what use is it if no goal comes out of it?

Leroy Sané had two approaches, but otherwise the Paris defensive, which was still uncertain a week ago, was stable enough to save the result in an exciting final phase over time.

Player of the Game:

When broadcasting on television, PSG is abbreviated to PAR when the score is displayed.

The PAR could also have stood for Leandro Paredes.

The Argentine was not there in the first leg, now he was the clearer in front of and in the defense, who alternated between calm and hot spur, depending on what was appropriate.

One of the match winners.

Neymar of the game:

Everyone knows that from Neymar, rolling over the lawn after every body contact in a duel, it has meanwhile been corrupted in countless Internet memes and caricatures.

Sure, he didn't want to do without that against Bayern either.

But he also showed everything that makes him a world class player.

His speed with the ball and his dribbling are impressive.

As long as the Louvre is still closed, Parisian art lovers have to look at Neymar and Mbappé.

Nostalgia of the game:

For Jérôme Boateng, for David Alaba, for Javi Martínez it was the last Champions League game in the Bayern jersey.

What successes have the three celebrated together, how many European Cup highlights have they experienced together.

And no offense: Boateng's humming top against Lionel Messi will also remain unforgettable.

The three deserved an even more worthy farewell, they represent the big days of Bayern Munich.

After the game, the Sky-Studio drilled in a tried and tested manner to Hans-Dieter Flick about his future.

The trainer made a several-minute statement from which everything could have been read.

Was that a plea for switching to the DFB or for staying at Bayern?

A diplomatic masterpiece from the school of Hans-Dietrich Genscher, and that right after the defending champion left the Champions League.

You have to get that right first.

Quote from the game:

"They can play football, Mannomann." Sky live commentator Wolff Fuss sums up the spectacle in one sentence.

Realization of the game:

The biggest compliment you can give a soccer game is forgetting that there are no spectators in the stadium.

This game deserved this compliment. 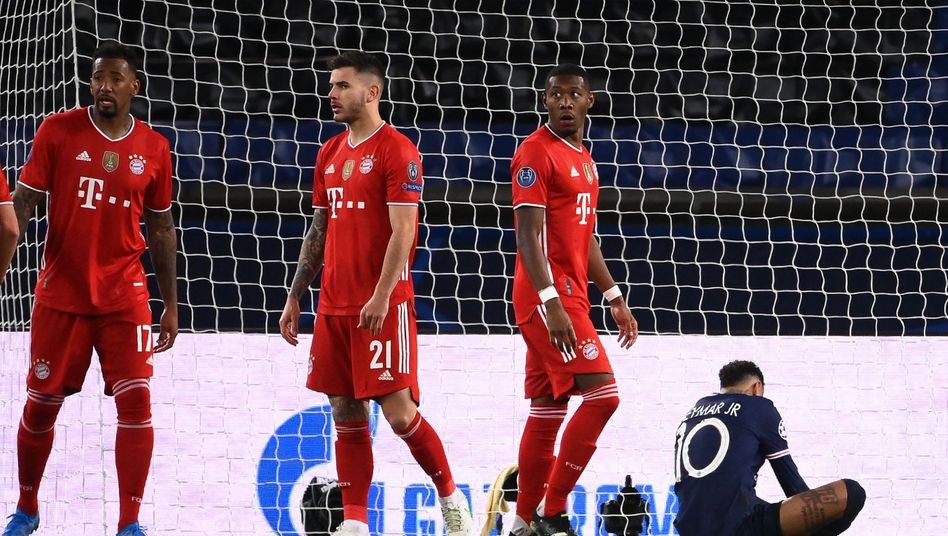