As on the go, striker Eric Maxim Choupo-Moting scored this Tuesday evening against PSG (0-1). The Cameroonian came close to playing

That stab could have hurt a lot.

Especially when it is your "ex" who is the author.

PSG fans were already seeing the disaster scenario happen with Eric Maxim Choupo-Moting, scorer at the Park, in the role of the Bavarian hero.

They can take a big blow.

It must be said that eight months ago, Choupo-Moting, with the Parisian jersey on his back, entered the history of Paris Saint-Germain by offering a historic qualification in Paris for the semi-finals of the Ligue des champions.

His goal at the finish against Atalanta Bergamo (1-2), in Final 8, thrilled all the Parisian people.

So, imagine ... They must have trembled in all their limbs when they saw him score against his old club, as on the first leg.

History seemed to be on the move, and the pill would have been all the harder to swallow as the presence of "Choupo" on the meadow in the absence of Robert Lewandowski, injured a few days before the first quarter.

Many observers, moreover, rejoiced at the absence of the Pole for this double confrontation.

They almost bit their fingers at the finish, regretting their optimism.

In the enclosure of the Parc des Princes that the Cameroonian knows so well, even without the supporters, the captain of the Indomitable Lions recalled the good memories of PSG.

A goal that is not enough for Bavarian happiness

His angry header in the back of Presnel Kimpembe left no chance for Keylor Navas (0-1, 40th), who had just stopped a shot from David Alaba.

In Munich, already, it was with his head that Choupo-Moting had found the net, taking the best from Danilo Pereira.

The former Schalke 04 player reminded PSG historians that the elders of the house too often take advantage of this reunion to shine.

In the final, last summer, it was also Coman who had weighed down Parisian dreams ...

Eric Maxim Choupo-Moting is not the first player passed by PSG to score a goal against the Parisian club at the Parc des Princes in the Champions League.

Moussa Dembélé had already done it with Celtic Glasgow on November 22, 2017.

The fate of Choupo-Moting is extraordinary.

The 32-year-old striker has scored more goals in two games against Paris in the Champions League (2) than in ten games with the capital club in the most beautiful of European competitions.

Each time he tackles a major European event, he is considered too limited in the last gesture, too messy technically.

We imagine that the bar is too high for him.

And yet, it pushes the boundaries.

Each time he manages to surprise.

This Tuesday evening, the element of surprise almost worked once again.

But his goal was not enough to make the Bavarian defending champion happy.

And to spoil the Parisian party. 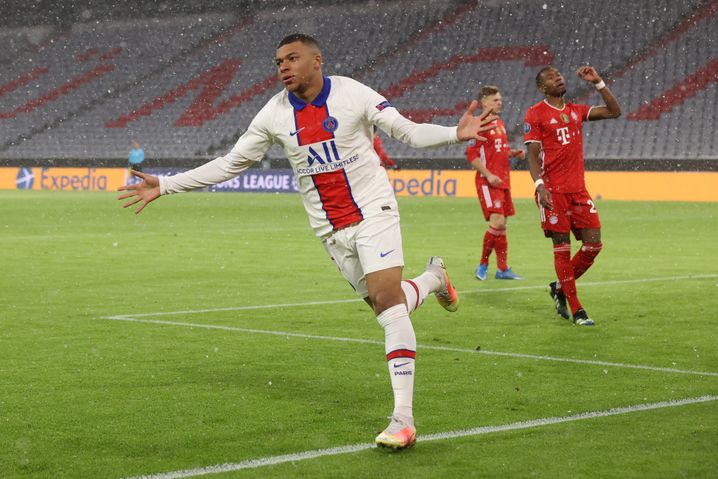