Some of Ligue 1's flagship teams are led by non-French-speaking coaches and rely on mixed numbers between players.

To advance an L1 team, fluency in French is not essential.

"Football is a universal language," argued recently Niko Kovac, the Croatian coach of Monaco, raised in Germany, who speaks English.

), I had 17 or 18 different nationalities in the locker room, so I'm used to this kind of situation.

I have my character, the French players have theirs.

In the field, we communicate very well, our ranking proves it… ”At PSG, Monaco and OM, the three most cosmopolitan teams in L1, we tried to determine which language (s) were favored (s).

"Communication is fluid between us, his Spanish is fantastic and his English is incredible," Pochettino confided about the Bondynois at RMC Sport's microphone in mid-April. At PSG, French and Spanish intermingle in the relatively relaxed context of training. But paradoxically, the French takes over in the locker room and during matches. In the field, Marquinhos speaks in French to his teammates. Even if Neymar and he are keeping aside in Portuguese, back on the pitch after half-time, for example. Pochettino does not yet fully master French, despite three years as a player at PSG and Bordeaux (2001-2003). He holds his talks and press conferences in English and / or Spanish. He can also turn to his deputy Miguel d'Agostino,who has played and trained in France in the past.

Champions League: next year, goal of victory for PSG ... if all goes well

Monaco: half French, half English

In the Principality, the French naturally have citizenship, half of the workforce being French and the club aligning eight French on average per game this season: Lecomte, Sidibé, Badiashile, Disasi, Aguilar, Tchouaméni, Fofana, Ben Yedder , etc.

Furthermore, Cesc Fabregas and Montenegrin Jovetic speak well enough to express themselves publicly in our language.

As for the third goalkeeper, the young Polish Radolslaw Majecki (21 years old), who arrived in June, he occupied his confinement last year studying French intensively, using textbooks and series ...

📊 Author of an exceptional second half of the season at the head of 🔴⚪️, Niko Kovac already has the highest victory ratio for a first season on the bench of AS Monaco.

English is practiced by non-French speakers, first and foremost Kovac and his staff.

"It allows everyone to learn, it's a win-win," said the coach.

Everyone is making an effort, myself included, to improve myself in French.

For fine instructions, Kovac relies on Damien Perrinelle, a 37-year-old ex-player, three and a half years spent in MLS at the New York Red Bulls (2014-2017).

“At the start of the season, it was not easy, admits Youssouf Fofana, midfielder Espoirs.

The instructions are often the same so we understand the basics.

Some speak English or Spanish.

I speak all languages ​​a bit.

With my hands, especially… ”This season, the club is also circulating“ The vocabulary of football ”, an illustrated bilingual lexicon, written by a teacher, Annabelle Creuzé, who lists the keywords in each of the areas of the game.

At OM, many executives, Mandanda, Payet or Thauvin, speak French but a large place is given to Spanish since the enthronement of Jorge Sampaoli in early March.

“In training, in pre-match talks and video sessions, Sampaoli and his assistants always speak Spanish,” says a close relative of the group.

Their words are translated into French by Jacques Abardonado.

“Hispanic, the ex-player, 42, formerly in charge of training at OM, was attached to the staff of the Argentine coach upon the latter's arrival.

Despite the late opening of the score from Strasbourg, our Olympians will not let go as evidenced by the equalizer on an angry header from @PipaBenedetto 💪🔵⚪️

Between players, in matches, French and English spontaneously compete with Spanish.

Failing to speak French fluently, all OM players are supposed to understand it.

Thus, defender Alvaro Gonzalez, who arrived in the summer of 2019, quickly managed to speak French.

The club has been offering courses to newcomers for several years.

In the early stages, translators are made available to them in certain circumstances, such as one-on-one interviews.

Ligue 1: formidable suspense or a race to the bottom? The verdict of our football experts 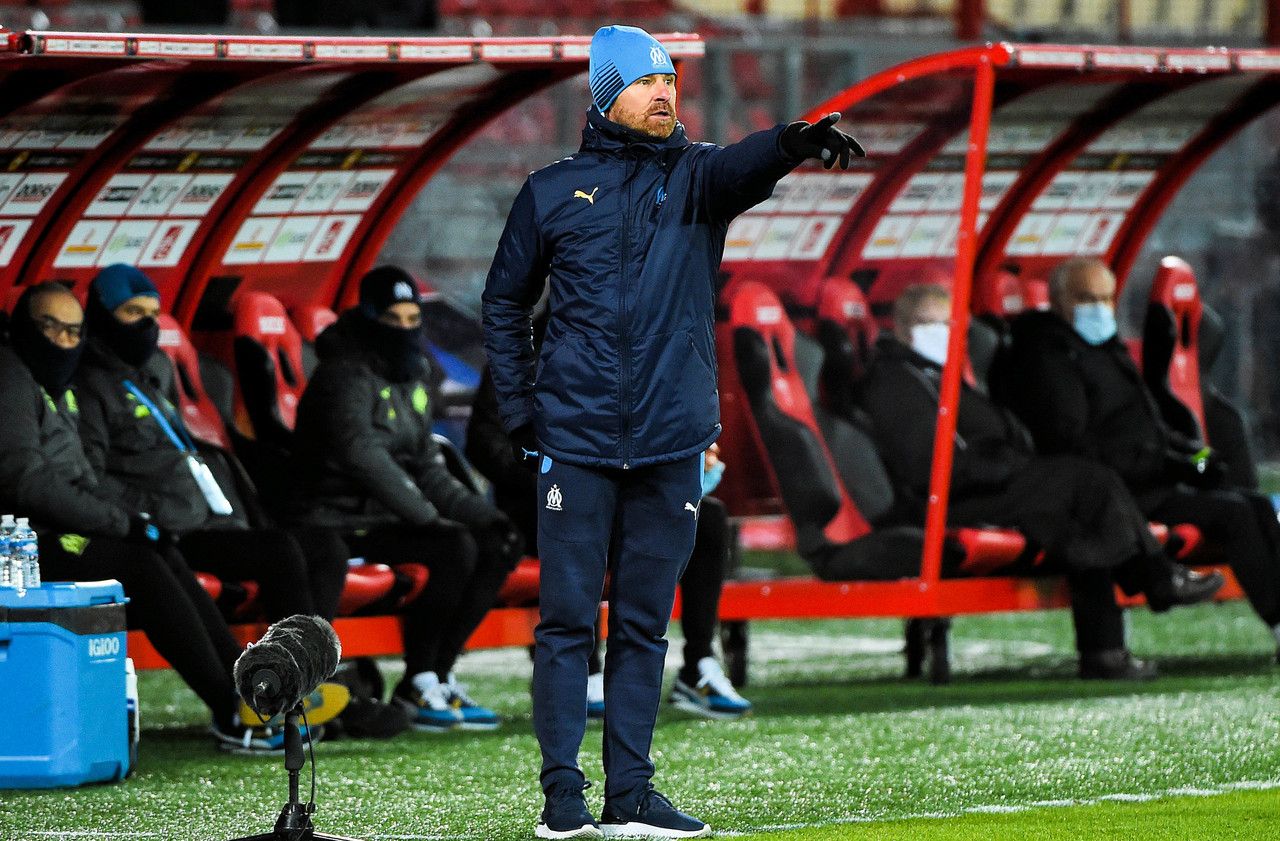 PSG-OM: "The most unbalanced Championship in the world", Villas-Boas launches hostilities Monaco-OM: "We no longer have the right to make mistakes", notes Valère Germain

"He is ahead of me": Pascal Olmeta talks about his son called to the Bleuets