The time has come! After 40 years of membership in the Bundesliga, SV Werder Bremen will start a season as a second division on Saturday evening (8.30 p.m.). At the beginning, the team of coach Markus Anfang meets the north rivals Hannover 96. The preliminary report of the DeichStube *.

After 40 years of membership in the Bundesliga, SV Werder Bremen will start a season as a second division on Saturday evening (8.30 p.m.).

At the beginning, the team of coach Markus Anfang meets the north rivals Hannover 96. The preliminary report of the DeichStube *.

Bremen - Saturday evening, 8.30 p.m., floodlights, small northern derby, and finally a lot of spectators again in the Wohninvest Weserstadion - in fact, despite

their disappointment with the first relegation after 41 years,

have reasons to be happy: But before the second division start against Hanover 96 (Saturday in the

the DeichStube) it almost seems as if the club wants to nip any optimism in the bud.

Werder is difficult and not greedy, the problems around the team are obviously too big, and they can break up at any time for financial reasons.

Of course, coach Markus Anfang is not to be envied, but he does not see himself in the role of mood maker either.

The new coach analyzed the situation of the club at the matchday press conference rather soberly.

The 47-year-old only got a little more emotional when it came to the audience.

Werder Bremen against Hannover 96: Markus Anfang steps on the brakes on euphoria before the start in the second division

“It was a lot of fun in Rotterdam,” said Anfang recalling the last test match between

against Feyenoord in front of around 7,000 spectators. It felt a bit like it used to be. “I hope that it will go very quickly, that we as a society will get this attitude towards life back. We need that after the pandemic, even if we haven't got through it yet, ”said Anfang. The team was primarily responsible for a proper atmosphere on Saturday: “We want to spark a good mood and make sure that the spark leaps over.” It probably sounds pretty good when reading, but it didn't sound really thrilling.

Perhaps it was because this story with the spark should not be so easy. Because

comes up again and again at

: “We are in a difficult situation.” Which cannot be dismissed out of hand. Actually, Werder still has to give up many players for economic reasons, and actually many players still want to leave for economic reasons. But there are simply no suitable buyers. So what has to go together in Bremen for the time being, what should and no longer want to go together. After all, the

still top-notch. But at this point, the beginning immediately put the brakes on euphoria: “But it is also the squad that has been relegated. The boys come from a negative spiral. "

Werder Bremen against Hannover 96: Difficult situation at the start of the season in the 2nd division

Positive results in preparation against initially not so strong opponents should stop this downward trend.

And in fact it didn't look too bad what the Bremen team delivered in phases.

also emphasized that every player is fully involved. However, when asked what he expected from the first game, the coach did not speak of a win, but only "of many phases in which we are able to access our content". The foundations for this have been created, but there is a catch. "We couldn't get used to it, that's why we don't have the automatisms," noted Anfang. Because he did not know when players might leave the club, he had to give all players as much playing time as possible so that they understand his football. As I said, the situation is difficult.

The beginning has to tinker - especially when attacking.

There are no real wingers in the squad, who are so important to his 4-3-3 system, there are good alternatives injured and quick replacements are not in sight.

Clemens Fritz was abroad this week, but the head of professional football and scouting did not bring a new attacker with him.

"The situation is difficult," was his unsurprising explanation when he first appeared in a new role.

Fritz now sits at the coach's side at press conferences and has taken over this job from Frank Baumann.

Werder Bremen against Hannover 96: Nobody speaks of being promoted again - fear of another crash?

But the focus was on the coach.

After all, it was about his first competitive game for

He was already feeling "a little tingling", confessed at the beginning of the game against

We're looking forward to the competition. ”It is also nice that it starts with a home game.

But somehow the beginning seemed like he didn't want to release the handbrake at all.

Just don't stir up too high expectations for this evening, for this team.

Because nobody knows what is really going to happen at Werder.

Because of this, the only seasonal goal that has been given so far is reconstruction.

Nobody likes to speak of a resurgence.

There is an uncertainty, almost a fear, that the crash will continue like this.

And nobody really goes against it verbally.

After all, the team usually presented itself differently in the friendly matches. The beginning let them play forward courageously and attack there again. Perhaps everyone involved should just think about that on Saturday evening and not about all the difficulties. Then it could be a football festival in front of 14,000 spectators. (kni) Also interesting: This is how you see Werder Bremen's second division opener against Hannover 96 live on TV! And: Is that the Werder starting XI against Hannover 96? * DeichStube.de is a joint venture between the Kreiszeitung media group and the WESER-KURIER media group and an offer from IPPEN.MEDIA. 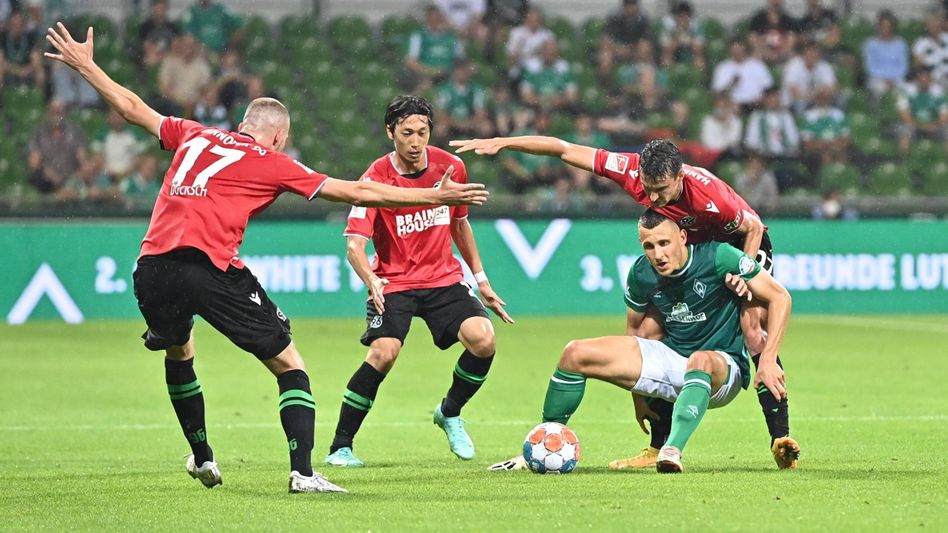