The last two French representatives, Ugo Humbert and Jérémie Chardy, were eliminated this Thursday in the quarter-finals. 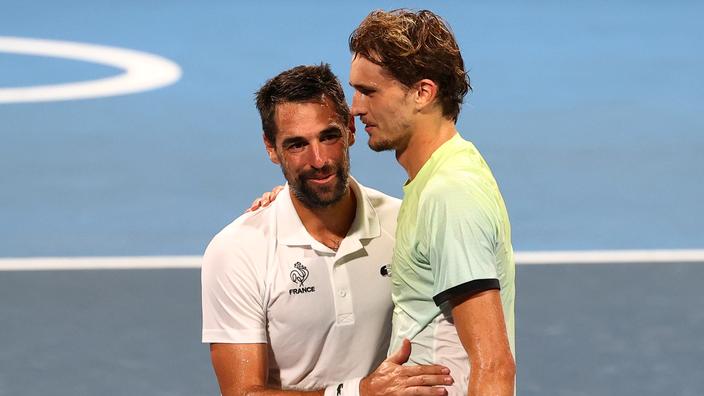 There are no more French competitors in the tennis tournaments of the Tokyo Olympics after the eliminations of Ugo Humbert and Jérémy Chardy in the quarter-finals on Thursday, defeated respectively by Karen Khachanov and Alexander Zverev, the German who will challenge world number 1 Novak Djokovic in the semi-finals on Friday.

The Blues du tennis are done with the 2020 Olympics and will therefore leave without medals, with some disappointments, especially on the women's side where, with the exception of Fiona Ferro, they were all eliminated from the start, while the greatest chance of blue medals on paper, the pair of doubles Nicolas Mahut / Pierre-Hugues Herbert, did not go beyond the first round.

By placing two of its representatives in the quarterfinals, the French tennis team did little better in Tokyo than in Rio, where only Gaël Monfils had reached this level.

The Brazilian stay of French tennis had also been marred by two controversies: one around Kristina Mladenovic who had incriminated the French Tennis Federation for a story of outfit color which, according to her, would have harmed her concentration, the another concerning Benoît Paire, excluded from the France team in the middle of the Games for not having "

" by not staying in the Olympic village.

The Games are really special.

In Tokyo, the French clan, weakened by recent poor performances in Grand Slam, on the contrary appeared united and delighted to be there. And the performances followed, with Chardy and Humbert finding themselves in the quarters, Humbert even signing a great victory against world number 4, Stefanos Tsitsipas, in the round of 16. “

The Games are really special. It is not a tournament like the others. It's wonderful to be able to meet up with all the athletes. There is a great atmosphere. I wasn't sure what to expect as these are my first Games. Whatever happens, I know I will have lots of good memories,

”Chardy, 34, said on Tuesday after his victory over Aslan Karatsev.

But after two matches in three sets against Aslan Karatsev and Liam Broady, Chardy was no match for an intractable Zverev, especially on service (11 aces), and winner in two sets (6-4, 6-1 ). Humbert, also physically tested after extended matches, had been dominated a little earlier by the Russian competing under the neutral banner Karen Khachanov (25th), 7-6 (7/4), 4-6, 6-3. “

I'm so happy to be there, to win my first matches with the Blues jersey, I had fantastic moments. Since I was little, if I had been told that I would be in quarterfinals of the Olympics, I would have signed immediately

“Said the 23-year-old Frenchman. Khachanov will face him for a place in the final, the Spaniard Pablo Carreno who defeated world number 2 Daniil Medvedev, who appeared all week very overwhelmed by the Tokyo heat. The other semi-final will pit Zverev against the favorite of the Olympic tournament Novak Djokovic, in search of the “ Djokovic qualifies for the semi-finals of the Tokyo Olympics

A piece of metal thrown from a Betar stand, Shmuelevich: "It can kill a man" - Walla! Sports