The Atletico Madrid star scored a double, including a goal in extra time, in the dramatic 1: 2 over Getafe: "His extension is unusual"

"Not as fast as it used to be, but deadly": In Madrid, Luis Suarez rejoices

The Atletico Madrid star scored a double, including a goal in extra time, in the dramatic 1: 2 over Getafe: "His extension is an unusual thing."

Simeone: "We did not look the way we wanted to look, we are still waiting for our key players to reach their best ability."

And also: the impressive figure

Diego Simeone was nervous throughout the game last night (Tuesday) between Atletico Madrid and Getafe, but towards the end the nerves were especially evident on the champion coach. The Colchoneros came into the game against the city rival after finishing their last two games 0-0, with a team that has lost all its games so far. In the first half it looked very bad when Stefan Mitrovic put the hosts in the lead, as it was Hattafa's first goal against Atletico Madrid since November 2011. Almost a decade.

Luckily for the champion she has Luis Suarez. The Uruguayan was there to equalize (78) and also to score the winning goal a minute into extra time. Atletico Madrid are temporarily returning to the top, and Hattafa - they must find a solution after six rounds at the end they are still without points in La Liga.

This is not the first time Suarez has taken care to keep the points at Atletico.

In fact, according to a survey by the Catalan "Sport", the mighty striker is responsible for 26 points for his team since arriving - an astonishing figure by all accounts - 23 of which (out of 86) were last season and ensured the Colchoneros' sensational victory in the championship.

Atletico Madrid are back to win the Spanish league with a dramatic 1: 2 over Getafe

"He is no longer as fast as he used to be, he is not participating in Atletico Madrid's high pressure game as usual, but Luis Suarez is still deadly," the Marca game summary read. "The Uruguayan did not start the season well, but his extension is still an unusual thing."

Atletico Madrid coach Diego Simeone commented on his players' ability: "We are still at the beginning of the season, there are more situations the team has to deal with and difficulties we have to overcome. We did not look the way we wanted to look. The opponent made it very difficult for us "In a vulnerable situation. At the start of the game, what we were looking for was control, but we did not show sufficient intensity and speed. In the second half we played offensively. We are still waiting for our main players to reach their best ability."

"I'm happy with the result, of course," Suarez said at the conclusion.

"We fell behind but we knew how to come back with a lot of character, and more in the final minutes. I am convinced that the turnaround we achieved will also contribute to us in the future and shoot us with the energies."

Waiting for his senior players.

This is the length of the streak in which Atletico Madrid did not concede a goal against Hattafa.

It all ended in the 45th minute when Stefan Mitrovic put the opponent in the lead.

Lucky to have Suarez.

* Atletico Madrid scored seven points thanks to goals in the last quarter of an hour of the game - more than any team in the Spanish league this season.

* The Colchoneros also scored 24 points from games they trailed during, and did so more than any other La Liga opponent. 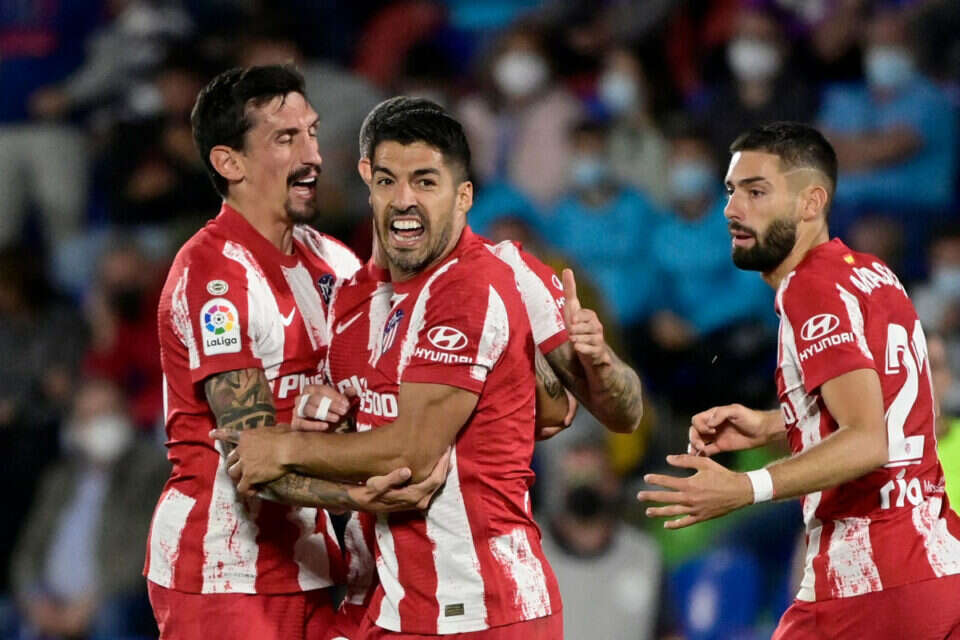 Pika: "3 games is a lot. The championship race is still open." Madrid to ridicule: Suarez impersonated "his Barcelona" - Walla! sport

Luis Suarez cried: "Barcelona did not appreciate me, Atletico opened the door for me" - Walla! sport

This time Suarez did not save: Alabs gave Atletico Madrid a premiere loss - Walla! sport

Spain: Barcelona and Atletico Madrid split 0-0, Real will reach the top in the first? - Walla! sport

Barcelona will lose again? In Spain reveal: Atletico's conditions for the acquisition of Griezmann - Walla! sport