Olympia: close again, again no slalom medal! French depends on everyone - Munich missed the podium Created: 02/16/2022, 11:40 am By: Marius Epp The Munich slalom ace Linus Straßer just missed a medal. Clement Noel from France is crowned Olympic champion. The race in the live ticker. The men's alpine slalom at the 2022 Olympics took place on Wednesday. With Linus Straßer, a Munich player was on 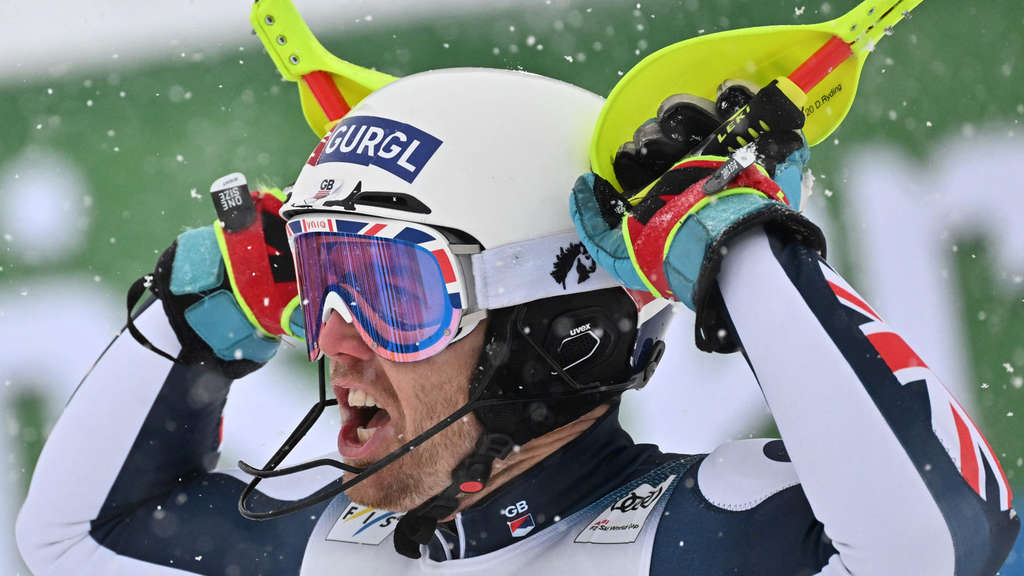 French depends on everyone - Munich missed the podium

Slalom at the Olympics: Final score after two runs

It shouldn’t be for the German athletes in alpine skiing!

Lena Dürr just missed out on a medal in the women's slalom, and Kira Weidle was also an ungrateful fourth in the downhill.

Linus Straßer is in a similar situation today, the Munich rider only ended up in seventh place, but he wasn't missing much: he was 26 hundredths slower than bronze winner Foss-Solevaag.

It's a pity, but it's still important to note: Germany is among the world leaders in alpine skiing!

His father won gold in Calgary in 1988, will he follow suit?

It's going to be very tight, the Austrian is making good progress.

But then the backlog!

That's not enough for victory!

Strolz fights for every hundredth below, it's second place!

Strolz has silver, Clement Noel gets the gold medal!

But then he twists at a gate, that won't be enough for gold!

At the bottom he is a bit off and even falls behind his compatriot Foss-Solevaag.

Big disappointment at the finish.

He is currently still on bronze, but the Austrian Strolz has everything in his own hands.

As usual, the Norwegian sits far behind and loses a little at the beginning.

It's quickly half a second behind, can he save himself to the finish?

Seven tenths behind Clement, who now has his first Olympic medal secured.

Now there are two more up - Kristoffersen and Strolz!

Who will be crowned Olympic slalom champion?

The Swiss does better than Strasser, but has to tremble for a medal.

Clement remains in front after his fabulous run, Meillard on the second!

5 - Linus Straßer (GER): What is the great German hope doing?

It's looking good up there, he's in full swing.

But then he seems somehow inhibited!

Too bad, the Munich player loses a lot of time from the middle.

Although he finishes third, there are still four riders to come.

That won't be enough for a medal!

Kitzbühel: sensation in the slalom!

Kitzbühel experienced an absolute surprise winner - Dave Ryding is the man of the day.

Kitzbühel: sensation in the slalom!

Wengen downhill: DSV debacle at the Lauberhorn race - just a few weeks before the Olympics

Double pack in the downhill: On Friday and Saturday, the Ski World Cup is a guest in Wengen.

The traditional Lauberhorn race in the ticker to read.

Wengen downhill: DSV debacle at the Lauberhorn race - just a few weeks before the Olympics

Linus Straßer missed a medal in the Olympic slalom.

The Frenchman has incredible potential.

Now he has to show it!

He brought a seven-tenth lead from the first round, eight at the finish.

Yule is defeated for the first time.

Is that enough for a medal?

The nerves play a trick on the Austrian.

Right at the start he misses a goal and is out.

Quite surprising that the Italian ended up so high in the first race.

But now he cannot confirm his performance.

That was not a good trip, it was the worm in it.

Yule could actually surprise everyone and go all the way to the front with a high start number.

The little speedster from Bulgaria winds its way around the gates in an agile manner, but the pace slows towards the end.

Yule stays ahead, Popov is third.

Now come the top eight, all of whom still have a chance at a medal.

At the beginning the rhythm isn't quite right, at least it's faster than Zenhauser.

No chance against Yule's time!

The tall Swiss doesn't quite find the balance and takes third place.

The Italian is getting into the flow well, but Yule really set a top time.

Razzoli can't quite get there, even though it was an almost flawless run.

Yes, it could be something.

He attacks and builds his lead - so he can move forward!

Great time at the finish, a whopping six tenths ahead of Ryding.

After just four goals, the Norwegian is already on his knees.

But he still drives to the end - he lacks eleven seconds.

It's the turn of the experienced Frenchman - he already has Olympic silver and bronze.

He's still missing the gold, but that won't happen today either.

We've seen better from him!

He ends up well behind Ryding.

The Kitzbühel winner has nothing to do with a medal today - but he's doing well again!

This is an attack ride!

But it does not come to the new best time - he is eliminated.

He wanted to take all the risks to move up the field.

It almost worked - but only almost.

The Croatian who grew up in Munich is showing a strong run!

It's not quite enough for Aerni's time, but he can be satisfied with that.

The slalom specialist was a little disappointed after the first run.

The faster course in the second run suits him better!

Almost eight tenths faster than Black, so he will make up a few places.

The Bulgarian surprised in the first heat but is now eliminated.

The Croatian really accelerates and attacks.

But the further it goes down, the more he runs out of breath.

He crosses the finish line a sliver behind Black.

Big mistake by the Canadian in the middle.

But he picks himself up again and brings the journey to the finish.

Not a bad run, but not quite enough to push Black out of the lead.

The Belgian doesn't drive in Schwarz' league - it lacks a bit of liveliness.

Everyone expected more from him, the Austrian is actually one of the best in the world.

He messed up the first run, but in the second run he manages to make amends.

He drives out 75 hundredths on Vidovic and is first.

The Croatian takes the lead.

The Belgian is eliminated after a few goals.

Few expected the Israeli either, he is a second slower than the Korean Jung.

The Korean surprisingly made it into the top 30 and is making a decent run down.

The Pole is the first!

The first turns look good, but then he loses his rhythm!

He misses a goal but fights his way back up and finishes the run.

The time is of course in the bucket, in the end he is also disqualified.

The second round in the men's slalom at the Olympics will begin in a few moments!

After the first round, the Austrian Johannes Strolz is just in the lead.

DSV ace Linus Strasser has created a good starting position and is in fifth place within striking distance of a medal.

The first 30 of the first round start in reversed order.

Slalom at the Olympics: intermediate result after the 1st round

Munich/Yanqing – On Wednesday, early in the morning of the Olympics in Germany, it's time to keep your fingers crossed!

But that won't be enough in the end if it's supposed to be a medal in the end.

Linus Straßer and the "Eisfluss" piste, it wasn't love at first sight.

The slope on which he would like to win an Olympic medal in slalom as the first German ski racer since Markus Wasmeier's double gold in 1994 is "apparently relatively easy," says the Munich resident - but that's what makes his project so complicated.

The "Ganslern" in Kitzbühel, the "Chuenisbärgli" in Adelboden or the "Planai" in Schladming, where Straßer won the Olympic dress rehearsal, demand everything from the slalom aces year after year.

On the other hand, the slope in Yanqing, which was specially carved into the mountain for the Beijing games, is, with all due respect: idiot hill.

Because that's the way it is, "you run the risk," says Straßer, "of wanting too much and overdoing it," meaning overdoing it.

Slalom at the Olympics in the live ticker: sensation by Munich on "idiot hill"?

What can happen then, he and DSV hope Alexander Schmid had to experience bitterly in the giant slalom.

A small mistake - and zack: over, end of all medal dreams.

Straßer is therefore looking for "the golden mean between really clean skiing, but still having your right foot on the accelerator".

The other top riders will do the same, of whom there are more in slalom than in any other discipline.

"It's the most brutal competition at the moment," says DSV Alpine boss Wolfgang Maier.

In six races of the season there were six different winners, only four racers were on the podium twice, including Straßer. Women's Olympic slalom in the live ticker: German medal? Munich woman in the form of her life Olympia live today: after sensational silver – next flood of medals in Germany on Sunday? Interview with Lena Dürr: "I still enjoy skiing a lot"