Without hurting Spiegler's achievement, the football we saw from Ofir Haim's team was something we've been waiting for 52 years for. 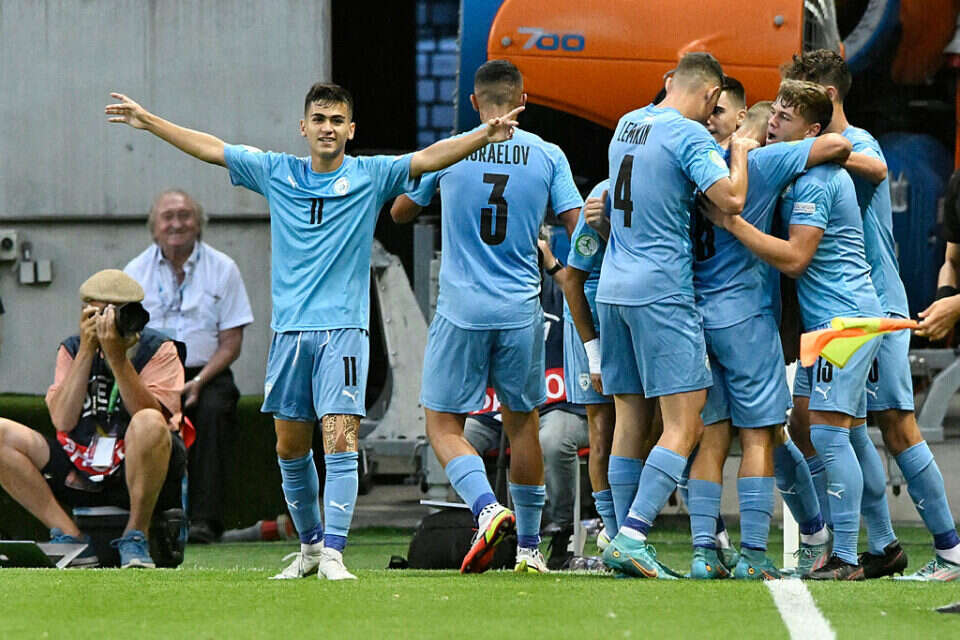 For 52 years, Israeli football has been talking about the 1970 World Cup. Spiegel's dedication to Spiegler, training camps at the heights of Colorado and mythological stories that have improved over the years.

52 years in which we cry out for pride from the Israeli national football team.

For me, in the last two weeks we got what we wanted.

This is the team up to the age of 19 and the tournament is much less prestigious, but the way the kids appeared for every game, the way the coach conducted and conveyed messages and especially the ability to deal with the best players on the continent without a drop of inferiority - this is exactly what we dreamed of seeing a team of men wearing blue white.

At the end of the game, four people sat at the press conference.

I will address each and every one of them.

I have known Ofir

Haim for more than twenty years.

First as an opponent, a smart, left-handed striker, with an excellent head game that was not easy to deal with.

Later as a team member, and in a personal tone I will say, a beloved member of the team and as a colleague on the lines, including a joint period that is too short at Hapoel Tel Aviv.

Ophir is a man who enters the heart of everyone who works with him and the role of coach of the next generation is tailor-made for him.

Even the foreign journalists who do not understand Hebrew could not help but be moved by the way Ofir spoke, by the connection to the actors sitting next to him and by the eyes that glistened with tears.

The strongest moment was when he talked about the longing for his son Orr, who suffers from autism, and that he just wants to hug him tight when he lands in Israel.

When we arrived in Budapest (on the way to Trnava), we met the father of Captain Eli Madmon, one of the championship standouts.

Moshe Madmon, a farmer who grows eggplant, tomatoes and two sweet children (daughter and son), one of whom is also a wonderful football player.

When you talk to Moshe, you understand why his son is the captain and leader of the best generation that has grown up here in the last 50 years.

Madmon started the championship carrying a minor injury and despite that, all the way through, played peace of mind, moved the ball great and just danced on the field in the team’s magical first half in the final.

When he was asked what was special about this team, his blue eyes began to cry and he cheered for everyone without saying the word I even once.

And maybe, that too explains why this team is bigger than the sum of its parts.

was born in Hawaii to a family of surfers.

From a young age he loved two things - a surfboard and a ball.

He started as a goalkeeper for Hapoel Herzliya's children, but very quickly changed function and moved to the humble northern branch of Hapoel Tel Aviv.

El Yam, showed in the championship rare qualities of connection that are almost non-existent in our districts.

I’m not talking about the mighty goal against France that lifted us to the final.

I'm talking about the strengths in the middle, the game vision and the great cooperation between him and his two center field partners, Madmon and Gluch.

The three made the center of the Israeli field the best in the championship.

Happily, I was privileged to work with the boy at Hapoel Tel Aviv and did not just choose the word I won. Had it not been for El Yam's back injury and the forced replacement, I have a feeling the ending would have been much sweeter.

We have a connection to glory, Photo: Reuters

Minute 40, Israel after its wonderful minutes (there were moments in the first half that it was not clear why Iniesta's Spain and Xavi are wearing light blue), goes out on a passing attack, with her two little magicians Oscar Gluch and Ariel Lugassi flying forward.

Gluch got the ball back from Logsie inside the extension, opened the body wonderfully, swapped legs twice as he canceled out Manchester City and Liverpool brakes and released a mighty arrow to short to score another huge goal in the highest class a player has at that age.

When Oscar was asked about the goal at the press conference, he talked about it nonchalantly, as if he had now scored a goal in a neighborhood catwalk game and that's how it sometimes feels.

It is no coincidence that in his first game in the league, in the blown-up Bloomfield against Maccabi Haifa, he scored a similar goal.

Oscar is not a man of words, he is a football genius who once grew up in a generation.

He's talking to the ball.

His orientation in space is amazing, his ability to earn players with an untrainable first touch and his killerness near the goal, it really is something special.

It will be interesting to see what happens to the kid after this championship.

The foreign journalists who sat next to us at the press conference also spilled on the boy and there is no doubt that he will be in demand in Europe.

The question is whether and how long Maccabi Tel Aviv will enjoy it in our league. There is no doubt that the combination between him and Ivica and the ability to include him in the busiest team in the country at the front, will be the most important story of the season in Israeli football.

Finally, I just want to say thank you.

Thank you to the coach and his wonderful team for the sensitivity to the players, the openness, the love and the wonderful work of coaching, thank you to Charlton who sent me to Trnava to broadcast the final, visit the team at the hotel and comment from the stadium.

And most importantly, thank you to the young men who restored faith in the Israeli footballer, who made me cry over and over again happy as a child, as well as now that I am writing these words.

Yonatan Cohen: "Just stand up and cheer for these star children" - Walla! sport

Where to now? The podium on the future of the youth team - Walla! sport