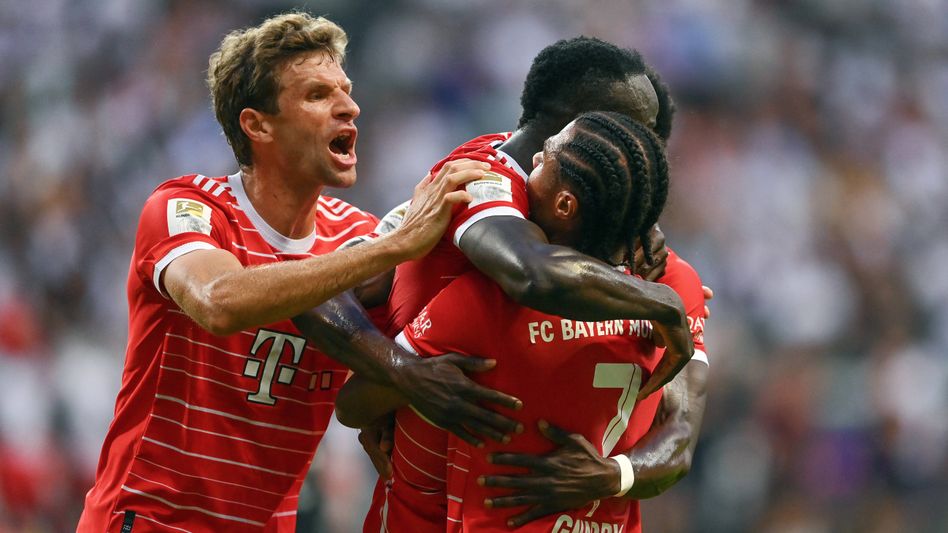 In a fast-paced game, Joshua Kimmich (5th minute) and Benjamin Pavard (10th) gave Bayern the lead with a double hit, star signing Mané followed up with a diving header with his first Bundesliga goal (29th).

Jamal Musiala, who was already outstanding in the Supercup against RB Leipzig, made it 4-0 (35th) before the break, Serge Gnabry 5-0 (43rd).

After the break, Frankfurt's Randall Kolo Muani punished a failed dribble by Bayern goalkeeper Manuel Neuer (64'), but it was far too late for a real comeback.

Musiala's second goal marked the end of the game (83').

Frankfurt coach Oliver Glasner decided not to repeat the very successful experiment with playmaker Daichi Kamada in defensive midfield in the cup game against 1. FC Magdeburg.

Instead of the Japanese, captain and ex-Munich Sebastian Rode moved back to the position next to Djibril Sow.

With league returnee Mario Götze, another former Bayern professional found himself in the starting lineup of Eintracht.

However, the ex-national player was rarely the center of attention in the sold-out Frankfurt stadium.

The guests from Munich were too good in the duels for that - and too quickly dangerous themselves: Kimmich scored a free kick from the half-field to make it 1-0, still under the smoke of the fan choreography with which the Frankfurt Northwest Tribune had clouded the first minutes of the game.

Bayern's six took advantage of the fact that Frankfurt had expected a cross and outwitted Eintracht goalkeeper Kevin Trapp with a surprising shot at the inside of the post (5').

The SGE then also helped to keep the pace of the game high.

Tuta missed the goal when he headed the crossbar by just a few centimeters (12'), and the Frankfurt team kept looking for the strong dribblers Ansgar Knauff and Jesper Lindstrøm, who attacked the gap between Alphonso Davies and Lucas Hernández in Bayern's back four.

Even after a Bayern counterattack, Frankfurt stayed in the game when Thomas Müller sent Gnabry's template to the post from close range (23').

Filip Kostić had decisively irritated Müller during the action at the last moment.

The usury of chances on both sides initially continued, Lindstrøm dribbled past three Bayern players in the center but failed to get the shot on goal (26').

Then Trapp was also able to excel, the SBU keeper deflected a long-range shot from Musiala to the crossbar (27th).

Then, at least for the guests from Munich, the chances were exploited again: Mané headed a template from strike partner Gnabry into the goal (29th), Musiala completed a combination via Mané and Müller from close range (35th), Gnabry shot so close to Trapps Body past the ball into the net that the Eintracht keeper could still touch the ball, but could no longer stop it.

In between, Mané had lifted the ball from an acute angle onto the crossbar (33rd) – the class difference at the break was clear.

After the change of sides, the game looked different: Bayern saved their strength, Eintracht had changed three times and thought about making amends in front of their own fans.

The jokers in particular caught the eye: a supposed consolation goal by Kristijan Jakić didn't count due to an offside position (56'), but the new Frankfurt striker Kolo Muani was then able to celebrate his debut goal (64').

The Frenchman benefited from a blunder by Neuer, who lost the ball while dribbling in front of his own penalty area.

Nagelsmann also made several changes in the second 45 minutes, while the top talents Ryan Gravenberch and Mathys Tel made their Bundesliga debuts.

However, the majority of the game had shifted to Bayern's half, who only became dangerous through isolated relief attacks such as Mané (74th), who failed from an acute angle at Trapp.

But they were enough for the half-dozen: Musiala used a nice pass from Leroy Sané to make it 6-1 (83rd).

On the coming matchday, Bayern will host VfL Wolfsburg in the first home game of the new season.

For Eintracht, the Supercup against Champions League winners Real Madrid in Helsinki is on Wednesday evening before the league continues with an away game at Hertha BSC. 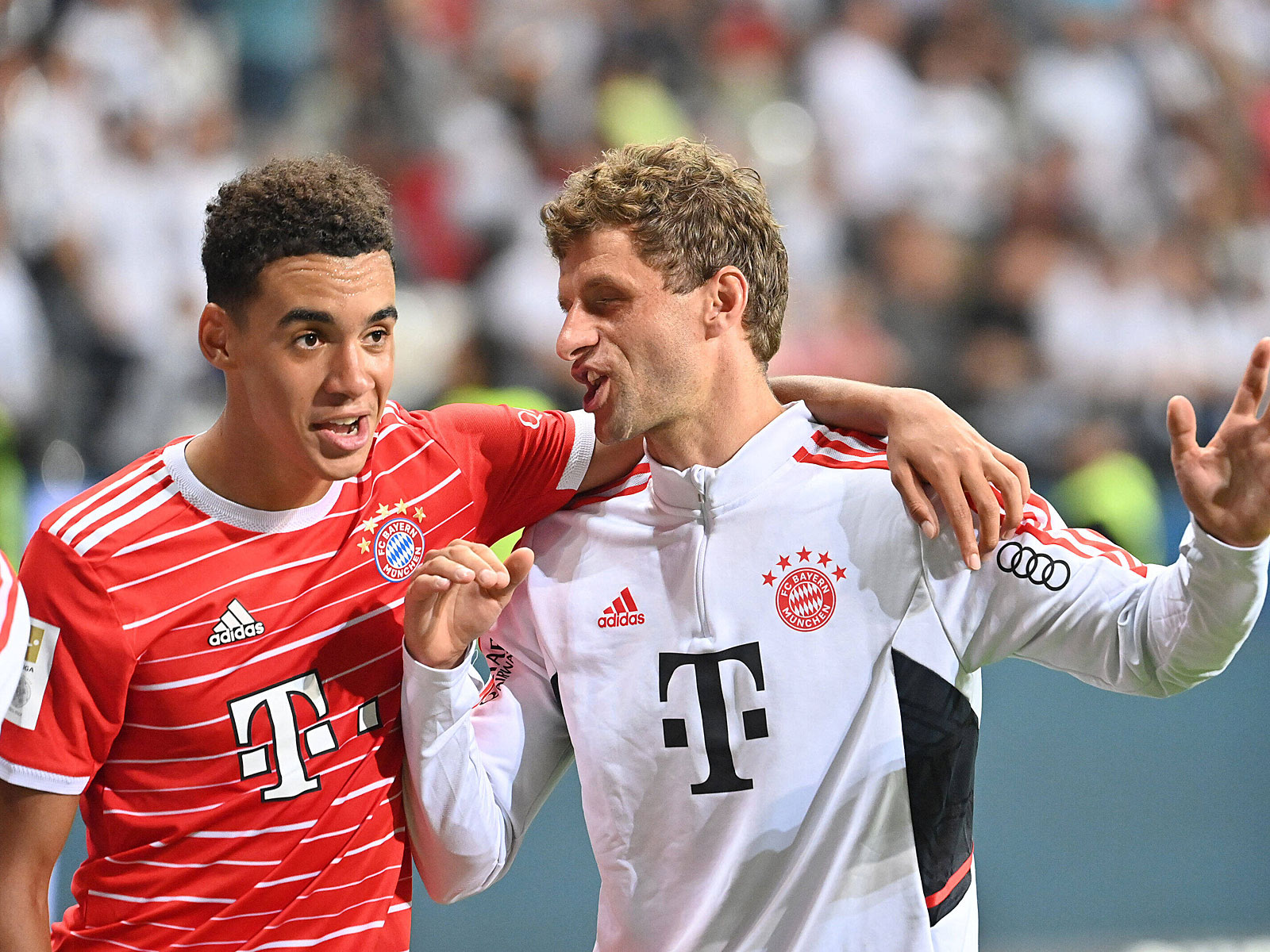 After Frankfurt dismantling: Sadio Mané grabs a megaphone on the fence – the network celebrates the Bayern star for it 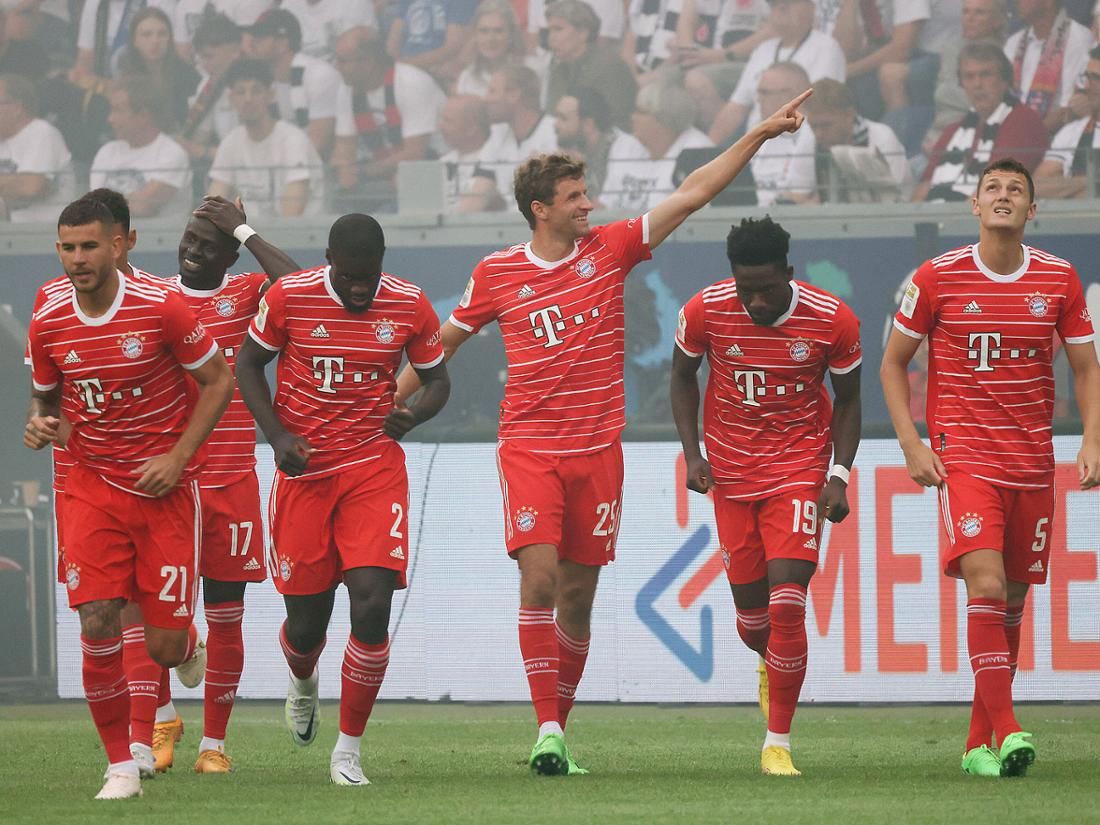 6: 1 in Frankfurt: Bayern dismantles Eintracht at the start of the Bundesliga - Neuer affords Bock

6: 1 in Frankfurt: Bayern dismantles Eintracht at the start of the Bundesliga - Neuer affords Bock