Jamal Musiala at Bayern Munich: The most exciting player is a 19

Bayern open the season against Frankfurt: With Sadio Mané and Matthijs de Ligt they present new, expensive stars. But the interesting question is: Can the young Jamal Musiala take over the direction yet? 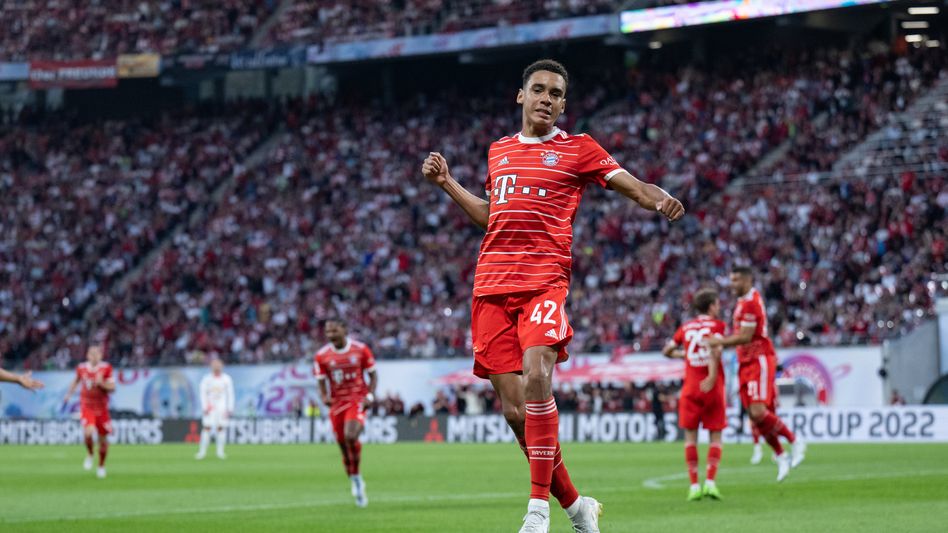 The young FC Bayern midfielder does without media sedation from his smartphone in the evening in order to get a more restful sleep.

Instead, he reads, most recently the book by the American motivational speaker Tim Grover: »Relentless«.

The awkward subtitle sounds very much like the program Musiala has planned for the next few months: »How to push back your performance limits and learn the basic principles to become unstoppable.«

When Bayern open the new Bundesliga season against Eintracht Frankfurt in the evening (20:30 TV: Sat.1, Stream: Dazn), the focus will be on Munich's new, expensive stars.

The club bosses, who have been remarkably busy this transfer summer, have so far invested almost 140 million euros in new players: In Matthijs de Ligt (67 million euros, Juventus), who was brought in as a stabilizer for the recently quite fragile central defense.

In Sadio Mané (32 million, Liverpool), who is intended as a crucial piece in the mosaic in the offensive that has been reorganized following the departure of striker Robert Lewandowski.

In Mathys Tel (20 million, Rennes), a 17-year-old striker who is to be gradually introduced to his future as a Munich center forward with a few minutes of play.

But the most exciting personality at the record champions is someone who has been at the club since 2019, but could become a real support this season for the first time – maybe even a difference player.

And that at the age of only 19: Jamal Musiala.

One of the greatest talents in German football

Born in Stuttgart and raised in England, Musiala is one of the greatest talents in German football.

But as it is with the label "talent", you are only a real class player when you have discarded it.

And Musiala does a lot for that.

It is said that he shortened his two-week summer holiday to one week in order to improve his reaction speed and shooting power with his personal trainer, former Nordic combined athlete Steffen Tepel.

He had his optimal diet determined by means of a blood analysis, which is why he now largely avoids pasta and prefers to eat carbohydrates over potatoes.

These are just small, seemingly mundane steps towards professionalization, but they should help to create the next big one in one's career.

In Bayern's 5-3 win against Leipzig in the Supercup last Saturday, Musiala already hinted at how much he can shape this team.

After that, his trainer, Julian Nagelsmann, was full of praise: Musiala was "incredibly good" and "already world class".

In modern football, players have less and less space and time.

Musiala is characterized by the ability to create free spaces with short, elegant movements when receiving the ball.

If he gets the ball, the pace of the game can suddenly increase significantly.

He creates moments of surprise.

For a team, that's worth its weight in gold.

A new face in foreign marketing

The Bayern bosses have recognized that Musiala could become a defining personality of the club in the years to come.

He is already being built up to become the future face of the club.

This could be seen most recently during Bayern's trip to the USA, when Musiala wrote in a daily diary on the club's homepage under the heading "What's Up, Jamal" about his impressions of the trip.

Musiala was already given a leading role in the important foreign marketing.

It still has to work out this position on the pitch.

But there could now be more room for him with the departure of Lewandowski.

Nagelsmann started in a 4-2-2-2 formation against Leipzig, with Mané and Serge Gnabry up front and Thomas Müller and Musiala behind them.

With Leroy Sané and Kingsley Coman there are two strong wingers as alternatives.

Mané should always be set initially.

But behind them the race is open.

Jamal Musiala only started 12 times in the Bundesliga last season.

It is quite possible that he will be seen there more often this season.

He should at least be well rested.