This is how FC Bayern is planning the transfer final sprint: new central defender, Laimer change, Zirkzee departure? Created: 08/19/2022, 1:49 p.m By: Philipp Kessler, Manuel Bonke What else is happening at FC Bayern in terms of transfers? All current information about Nianzou, Laimer, Zirkzee and Sarr at a glance. Munich – FC Bayern's squad planners had already done their homework in terms of

What else is happening at FC Bayern in terms of transfers?

All current information about Nianzou, Laimer, Zirkzee and Sarr at a glance.

Munich – FC Bayern's squad planners had already done their homework in terms of team composition early in the transfer summer.

Sports director Hasan Salihamidzic (45) and his technical director Marco Neppe (36) are currently being showered with praise.

“We did a very good job.

We got the players we wanted, strengthened ourselves and played the first three games very well," says President Herbert Hainer (68).

In 14 days the change window in Germany closes and despite the work done there are still a few construction sites in the squad of the German record champions.

The tz answers the most important questions about the transfer final sprint of FC Bayern.

Business games with Pavard and Stanisic

Will a central defender be signed after Tanguy Nianzou (20) leaves?

Those responsible at Säbener Straße are of the opinion that there are enough central defenders in the squad despite Tanguy Nianzou leaving for 16 million.

Should Pavard actually have to move inside, new signing Noussair Mazraoui (24) can easily take over the right-back position.

In addition, talents from our own campus have the opportunity to recommend themselves for higher tasks.

Amateur kicker Justin Janitzek (18) trained with the pros on Thursday.

The 1.92 meter tall central defender played over 90 minutes in all six regional league games and even scored a goal.

Another great talent who is predicted to have professional potential: U-national player Tarek Buchmann (17), who is currently injured.

Will FC Bayern get Leipzig's Laimer in the summer?

this week : "There is a very, very large tendency for him to stay with us." Even at Bayern Munich, those responsible do not expect a transfer to happen comes about - and have no problem with it.

There are several reasons for this: On the one hand, Marcel Sabitzer (28) is now in top form after his weak Munich premiere season.

On the other hand, with Ryan Gravenberch (20) they have been able to sign one of the greatest midfield talents in Europe and would like to give him playing time.

Especially since, alongside Leon Goretzka (27/rehab after knee surgery), high-flyer Jamal Musiala (19) can also play in the center of midfield.

“How can this man stay at the top of the world?” Thomas Müller jokes about Timo Boll

"See me better there": Bayern jewel Musiala eaten up because of FIFA rating

Are there still buyers for the "slow sellers" Joshua Zirkzee (21) and Bouna Sarr (30)?

There is definitely a lucrative market for striker Zirkzee.

According to reports, Munich are demanding between ten and 15 million euros for the young Dutchman.

As the Belgian newspaper

reports, there are increasing signs that the attacker will play for RSC Anderlecht again.

In addition, Zirkzee is also a topic at FC Brugge, PSV Eindhoven and Ajax Amsterdam.

There are still no offers for Sarr.

Burst Laimer transfer: With this sum, FC Bayern flashed off at RB Leipzig

Joshua Zirkzee: Million Poker Until September 1st? Now everything depends on a Stuttgarter

Lightning transfers at FC Bayern? Brazzo could still give up three players 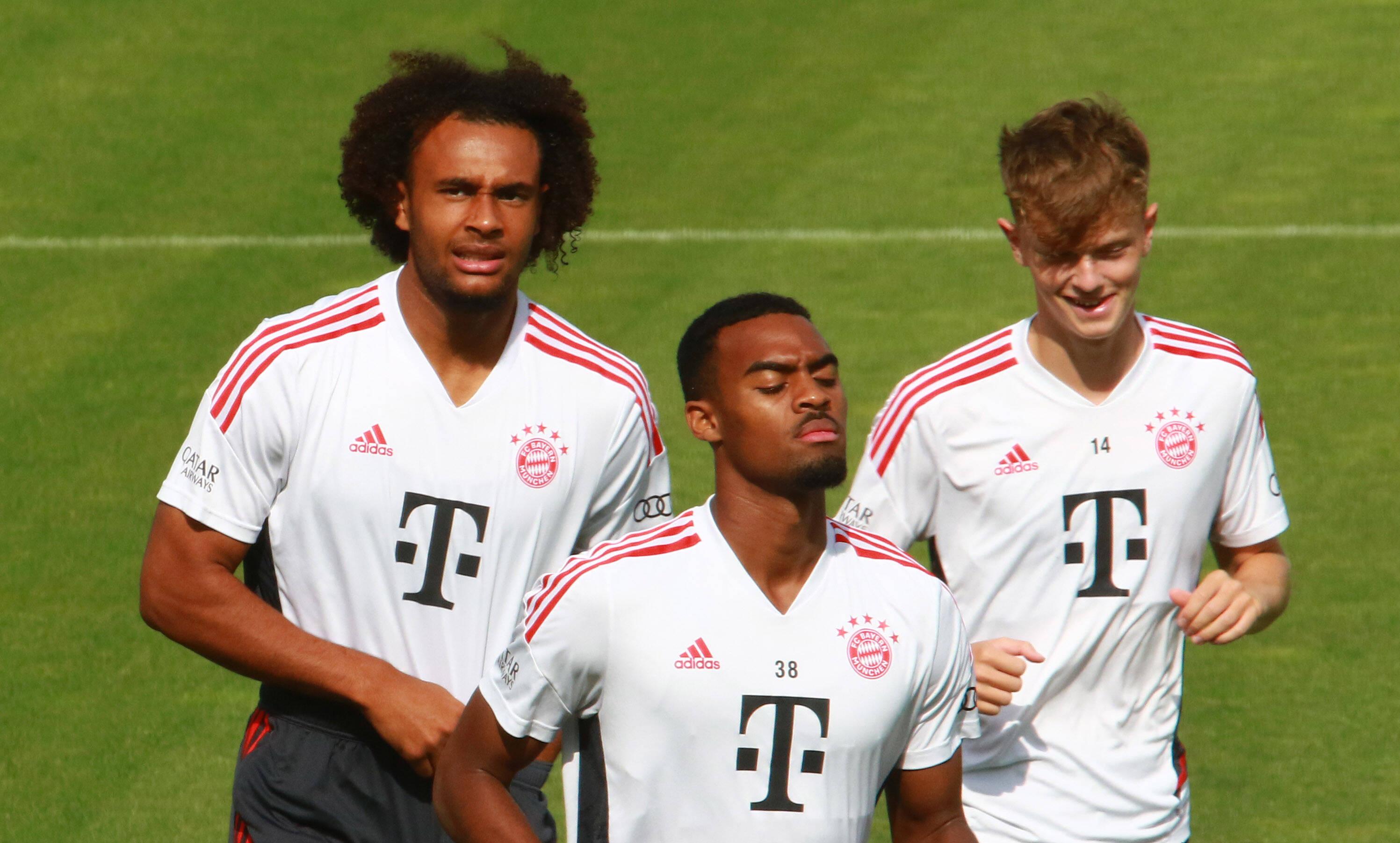