The Prime Minister, who is on a visit to New York ahead of his speech at the UN General Assembly, met randomly yesterday with the President of Turkey and the President of FIFA • Watch the summit meeting, in which they humorously mentioned: Maccabi Tel Aviv, Haim Rabivo, the national team and Fenerbahce 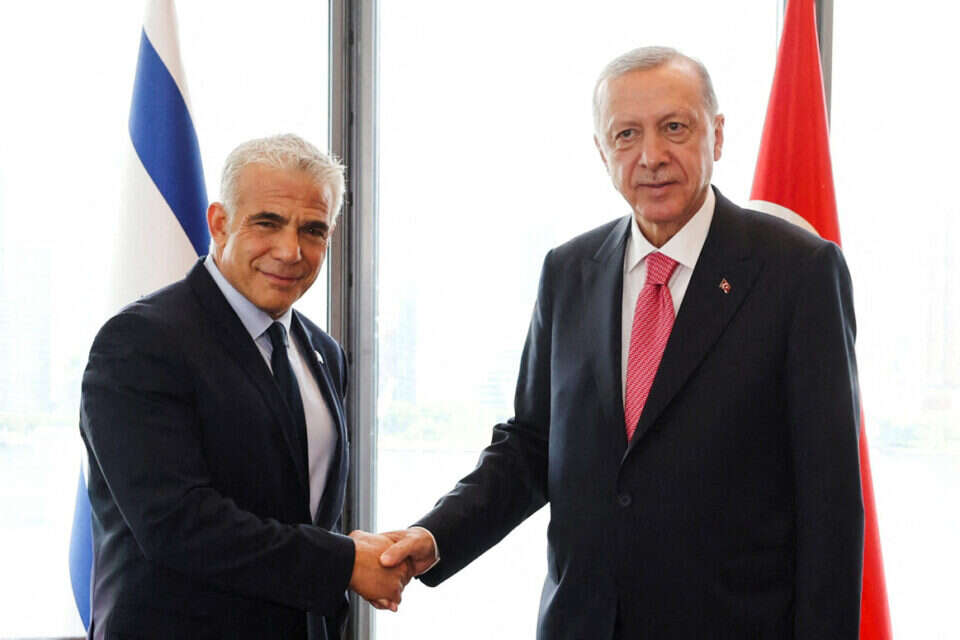 Prime Minister Yair Lapid, who is on a visit to New York ahead of his speech at the UN General Assembly, randomly met yesterday with the President of Turkey, Recep Tayyip Erdogan, in a video published in the news agencies, the two were recorded discussing sports issues together with FIFA President, Gianni Infantino.

In the video in question, Lapid is seen addressing the FIFA president: "It's good to see you, are you preparing for the big games?

I'm sure you had a great meeting, because Turkey has an excellent team.

Your teams would usually crush ours...".

"Bad memories from Fenerbahce because they used to crush our teams"

Later in the conversation, the prime minister mentioned Fenerbahçe, then one of Erdogan's staff members mentioned the fact that Haim Revivo starred in the team and was an exceptional player.

Towards the end of the hasty conversation, the Turkish president brought up the name of Maccabi Tel Aviv, to which the FIFA president said: "This is my favorite team."

Israel and Turkey announced the normalization of relations and the return of the ambassadors - voila! news

Israel and Turkey are in talks about a meeting between Lapid and Erdogan on the sidelines of the UN Assembly - Walla! News

Against the background of the escalation in the West Bank: talks to hold a meeting between Lapid and the King of Jordan in New York - voila! news

After 14 years of disconnection between the President of Turkey and the Prime Minister of Israel: Lapid and Erdogan met in New York - voila! news

For the first time since taking office: Lapid spoke with Erdogan on the phone Israel today