The Beitar Jerusalem coach is satisfied after 0:1 over Hapoel Jerusalem: "It's nice to win the Toto Cup, but it's still a derby." We hope to come back from the break better." Ziv Aryeh: "We will look to get stronger"

The striker of the Moldova national team concluded and will come to Israel after the break.

The coach is satisfied with the 0:1 over Hapoel Jerusalem: "It's nice to win the Toto Cup, it's a derby after all. I expect more hunger from the players."

Ziv Aryeh: "We still need to strengthen in other positions"

Summary of Beitar Jerusalem's victory 0:1 over Hapoel Jerusalem in the Toto Cup (Sport1)

Satisfaction in Beitar Jerusalem after the victory tonight (Thursday) 0:1 over Hapoel Jerusalem in the completion game of the Toto Cup. After the loss in the derby 1:0 and the defeat 4:0 to Maccabi Tel Aviv in the last round of the league, the yellow-blacks recovered and looked better in the game of Secondary lineups on both sides Jerusalem After a first half without many situations, Amit Cohen gave Beitar (59) a 0:1 lead that was maintained until the end.

Hapoel Jerusalem finished its part in the third most important tournament and will compete in the ranking games for places 5-6, with Hapoel Tel Aviv securing its promotion to the semi-finals of the tournament where it will meet Hapoel Beer Sheva.

The coach of Beitar Jerusalem, Yossi Aboksis, was pleased with the improvement in the ability of his players: "It's a nice victory in a factory like the Toto Cup, but it's still a derby that gives the players confidence to continue.

A lot of young players played on both sides tonight, and ours ran and did a very good job and that's important for us.

We hope to return from the break with better and more attacking teams.

After our bad start to the season in the league, I expect the team to be much hungrier in the rest of the season." By the

way, the one who scored today in his national team's uniform is Ion Nicolascu, who scored in Moldova's 2:1 draw in Latvia. Ex-Maccabi Petah Tikva has already finalized all his terms in Beitar Jerusalem and the conditions were also agreed with his current team, so that he will come to Israel and join the Aboksis staff at the end of the national team break.

Want to get stronger in more positions.

On the losing side, Ziv Aryeh was rarely interviewed after the end of the game, but definitely showed dissatisfaction with the game: "The changes in the lineup? Maybe it's too much. I don't set the time for the national teams' break and it doesn't matter what our game schedule is. We'll come back from the break properly, everything OK. We still want to strengthen in certain positions."

Our reporter Shlomi Heller adds: A minor was caught with tear gas during the derby and detained by the police.

One fan was sent off for the offense of not maintaining public order, and four more were detained for trespassing on the lawn - two during the game and two after the final whistle. 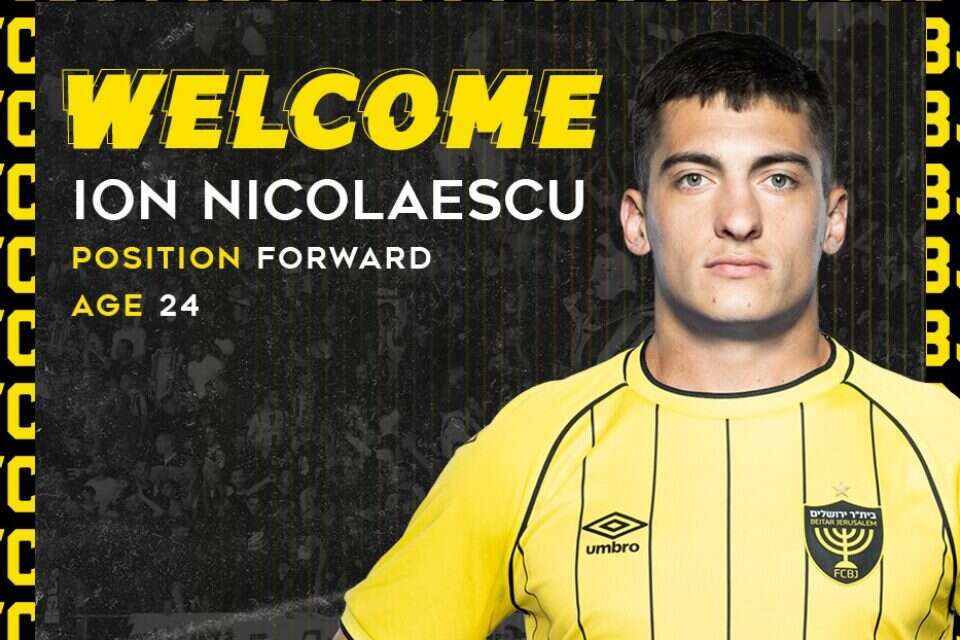 There is a striker: Yoon Nicolasco signed for two years at Beitar Jerusalem | Israel Hayom

The reinforcement is on the way, the energies are already back: Beitar Jerusalem is celebrating, and preparing for the derby - voila! Sport

Chaos in the stands of Beitar Jerusalem, Aboxis: "We will think about whether to bring a goalkeeper" - Voila! Sport