Germany in the individual criticism: Joshua Kimmich is chasing the claims, Niklas Süle the fast English

The form crisis is getting stronger: the DFB-Elf also revealed a lot of weaknesses in the 3-3 win against England. This not only affected well-known problem children, but also players with a claim to leadership. 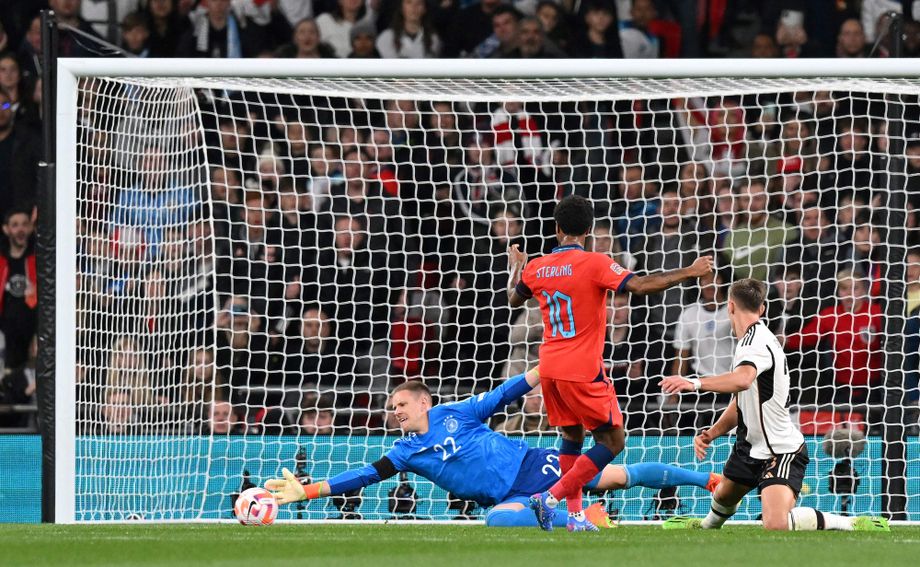 The FC Barcelona keeper was given the chance to prove his skills in the national team for the second time in a row.

Cleared twice very well against Raheem Sterling in the first half, saved the draw at 3:3 with a reflex.

When it came to goals, he was powerless.

An impeccable performance, and yet again there were three goals.

At the World Cup, Manuel Neuer will be in goal again.

The West Ham professional is one of Flick's favorite players because he diligently fulfills his duties.

This time he did a lot to keep his defense reasonably tight.

That didn't always work, the English attacked repeatedly and dangerously on the right.

Once he fell after a jersey pluck in the penalty area, and some referees would have called a penalty.

The Dortmunder had moved into central defense and did his job for a long time without making any serious mistakes.

But he is also quite a long way from the outstanding form of the last Freiburg weeks.

When the English started to run, he couldn't provide security either - and owed the penalty in the 81st minute.

Without the suspended Antonio Rüdiger, inevitably moved into a kind of leading role in defense.

Did a good job over long distances but wasn't always up to speed with Sterling's fast sprints.

In the second half he lost the overview in the pressure phase of the English before the 2:2.

David Raum (defense, up to the 68th minute):

The man from Leipzig slipped on the grass several times at the beginning, also an expression of his current uncertainty. Then he improved, but there was no sign of his valued cross runs.

He needs a regeneration phase.

After 67 minutes, Robin Gosens came on for him.

Bad for a defender like him: He was only five minutes on the field when the English scored twice.

Gosens hasn't had an easy time, he needs a sense of achievement, that wasn't one again.

Should be in charge of midfield and could at least credit himself with creating the DFB team's only chance to score in the first half when he shot just wide of the goal from 25 meters.

Otherwise too little effective for his claims.

And for the demands of the public.

In the 70th minute he was injured in midfield, a moment of shock, but Kimmich was able to continue.

The city professional was bustling as always, a lot on the ball, spinning his curls, looking for partners.

And yet: his passes to the front rarely found their target.

One almost shies away from writing the same thing over and over again.

But it's like that in almost every international match.

What you have to give him credit for, however, is that he remained ice cold on the penalty kick.

Jonas Hofmann (midfield, up to 46th):

This time attacking again from the start, unlike against Hungary: The Gladbacher has stuck in this team, which is proof of the good form he has had for months.

But it also shows that the alternatives for Flick on the right wing are not as great as they used to be.

After 45 minutes he was replaced by Timo Werner.

Played in the second half and a short time later had a huge chance to score when his opponent suddenly slipped in front of him.

When he then pushed a cross pass into the void instead of completing it, even some German journalists raged in the press box.

Two minutes later he pushed the ball wide of the goal.

To put it mildly, he is not in a good phase at the moment.

Jamal Musiala (midfield, up to 79th):

In the country where he grew up, the young Bayern star was noticeably motivated, tried to raise his dribbling, demanded the ball, but he didn't achieve enough either.

His action at the beginning of the second half then forced the penalty, which Ilkay Gündogan pocketed to take the lead.

After 79 minutes he couldn't take it anymore, then Thomas Müller came on.

Nothing more could be said about the veteran.

He too, one of the few national players who had arrived in good form, seemed inhibited, didn't have much confidence this time and rarely got into offensive action.

Things didn't go well for him and consequently it was over for him after 67 minutes.

Another problem child, the Bayern professional who is chasing his form.

It will have done him good - one thought.

Then the English came.

When there was nothing left to see from the German offensive, Gnabry's long-range shot suddenly made it 3:3.

This time in the lead instead of Timo Werner.

The game of the Germans changed as a result, but not necessarily to the advantage at first.

Havertz received few leads and had hardly any opportunity to assert himself in the penalty area.

Then he just had to do it outside the sixteen: His 2-0 was a feast for the eyes.

With the 3:3 all doubts about his line-up were removed anyway.

The debutant only played two minutes as a Havertz substitute, but he can say that he was also part of this half-time spectacle.

For the book series: My first international match.

The exuberant celebration of the national coach at 2-0 arose above all from the feeling of relief.

He had no idea what would happen to his team afterwards.

In terms of results, the team is on target with a draw at Wembley, but there was still a lot going on in terms of play.

With these two games, which should be so trend-setting, his DFB-Elf has moved far away from the circle of favorites.

The World Cup becomes a nail-biter. 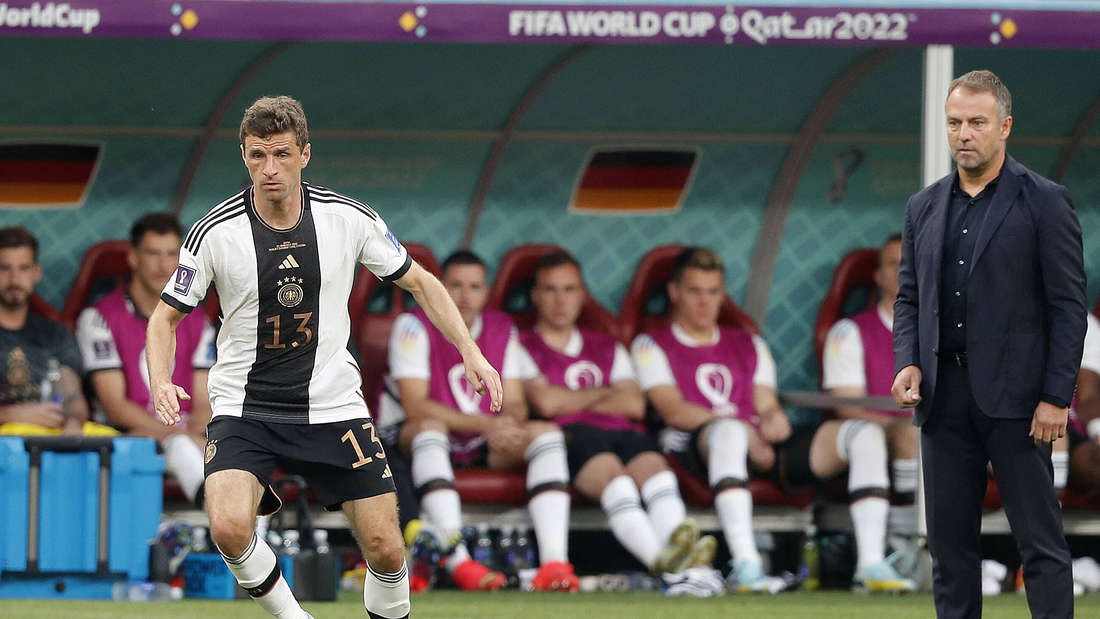 Individual criticism of the World Cup: Müller gets the worst grade together with the central defense

Individual criticism of the World Cup: Müller gets the worst grade together with the central defense 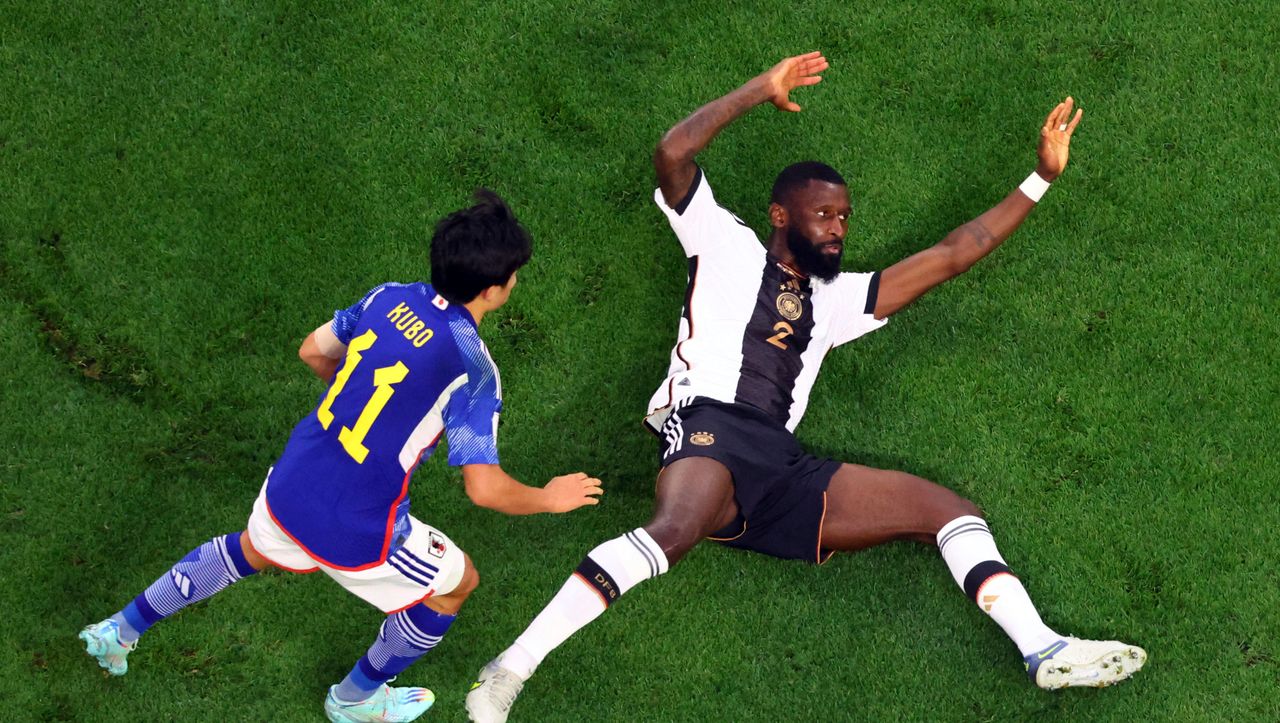