The 37-year-old Kenyan athlete is very close to falling below two hours with a time of 2 hours, 1 minute and 9 seconds 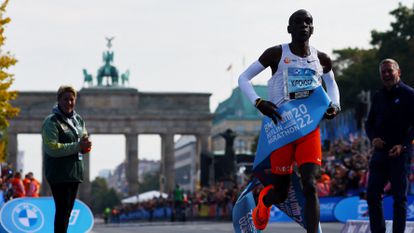 Like energy, technology or shoe models, sports champions are neither created nor destroyed, they are transformed.

Roger Federer is eclipsed, Eliud Kipchoge is still renewed at 37 years old and Remco Evenepoel is born as world champion.

All the same day.

A game of planets that leaves the fans amazed, with their mouths open, happy like Kipchoge's smile as he beats, again, the marathon world record, and leaves it in 2h 1m 9s.

A smile on his lips, pink slippers with good soles, very soft, Eliud Kipchoge runs alone through the streets of Berlin, on his way to new limits, to territory still unexplored by human beings.

He makes way for a large van with a high screen that, with the two human hares, the excellent Noah Kipkemboi and Moses Koech, already removed at kilometer 25, sets the pace for him, and also informs him of the expected record.

She has passed the half marathon in 59m 51s.

No one in history had even gone below the hour and minute.

If it were another, any other athlete, few would bet that he would not burst, because when he reached the 30 kilometer wall, his body would not say enough.

But it is Eliud Kipchoge, the monk of the marathon,

and in Kaptagat, in the Rift Valley, at 2,000 meters, he has his monastery.

He leads an ascetic life.

He gets up earlier than anyone.

He runs more than anyone.

He goes to bed before anyone else.

It's God, and people go crazy, and many even think that it can break, under normal marathon conditions, 42.195 kilometers, the impossible barrier of two hours.

He has been the best in the world for 20 years.

Then in the marathon.

At this age, say all those who know, the students of the human body, it is impossible to progress biomechanically, physiologically.

And when they see Kipchoge, regular, methodical, split times around 2m 45s-55s every kilometer, faster than ever, they can only conclude by appealing to the spirit that inhabits him, to an indefinable something that makes the Kenyan athlete unique who only exists for running.

And to the new shoe model, the Nike Alphafly 2, of course.

“I arrive in an excellent state of spirit”, says the day before.

“I know that physically it will be very hard, but if the spirit is good, so will the legs, the muscles, the heart.

And I don't know my limits."

And when they ask him what motivates him to keep running, he, who has won everything, he does not talk about her motivation, but about her mission.

“My motivation is to inspire others, to motivate all young people,” he says.

“I run for my family and for the people.

That's what really motivates me."

He speeds up in the last few kilometres, on Unter den Linden, the lime tree promenade, which opens up for him, passes under the Brandenburg Gate, into the heart of the Tiergarten.

He smiles more than ever when he raises his arms and approaches the tape that marks the finish, and only the drool that hangs from his chin denotes the pain, the suffering.

Half a minute less than his previous record.

In Berlin, the ideal city of the marathon, where his 2022 is the eighth consecutive world record that has been broken.

He crosses the finish line and hugs, happy as a young boy can only be, his coach, Patrick Sang.

“I've run so fast because of good teamwork,” he says.

"Everything has been perfect."

this video because the arrival of Kenyan at 2:01:09 is one of the great feats of the history of athletics.

Kipchoge is the greatest in history, and he is also a two-time Olympic champion, in Rio 16 and in Tokyo (Sapporo) 21, and has won 15 of the 17 marathons he has run in his life as a runner, and in Vienna, not a long way from his Berlin, he ran three years ago, in October 2019, faster than ever.

He ran a marathon in less than two hours, in 1h 59m 40s, a mark that cannot be homologated because he had aids - rabbits that took turns, the slipstream of a truck... - not allowed by the international federation.

"But don't ask me now if I will return to Berlin in 2023 to try to get below two hours in comparable conditions," he tells reporters.

"This is not the time to plan anything, but to celebrate."

Dozens of studies indicate that the new models of shoes, the new generation with light foams and carbon plates like springs that Kipchoge premiered precisely to win the Rio Games, allow brands to improve enormously.

And parallel to the technological evolution marches the evolution of the brands.

Not just the male ones.

In the women's event, with good shoes, Adidas, in her case, and male hares, the 28-year-old Ethiopian Tigist Assefa, who started as a specialist in the 800m, improved the Berlin marathon record by more than two minutes.

Her 2h 15m 37s, achieved in the second marathon of her life, are the third best world record in history, only surpassed by the current world record holder, the Kenyan Brigid Kosgei (2h 14m 4s) and by the British Paula Radcliffe (2h 15m 27s). 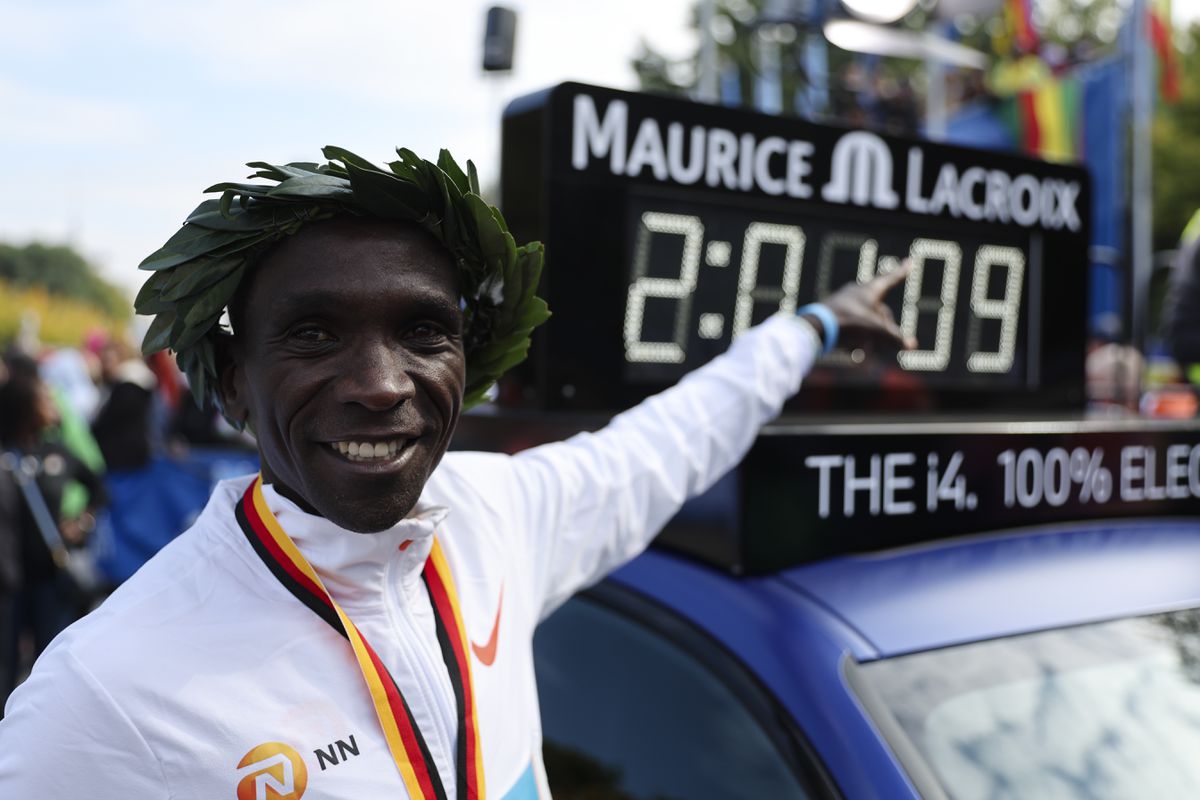 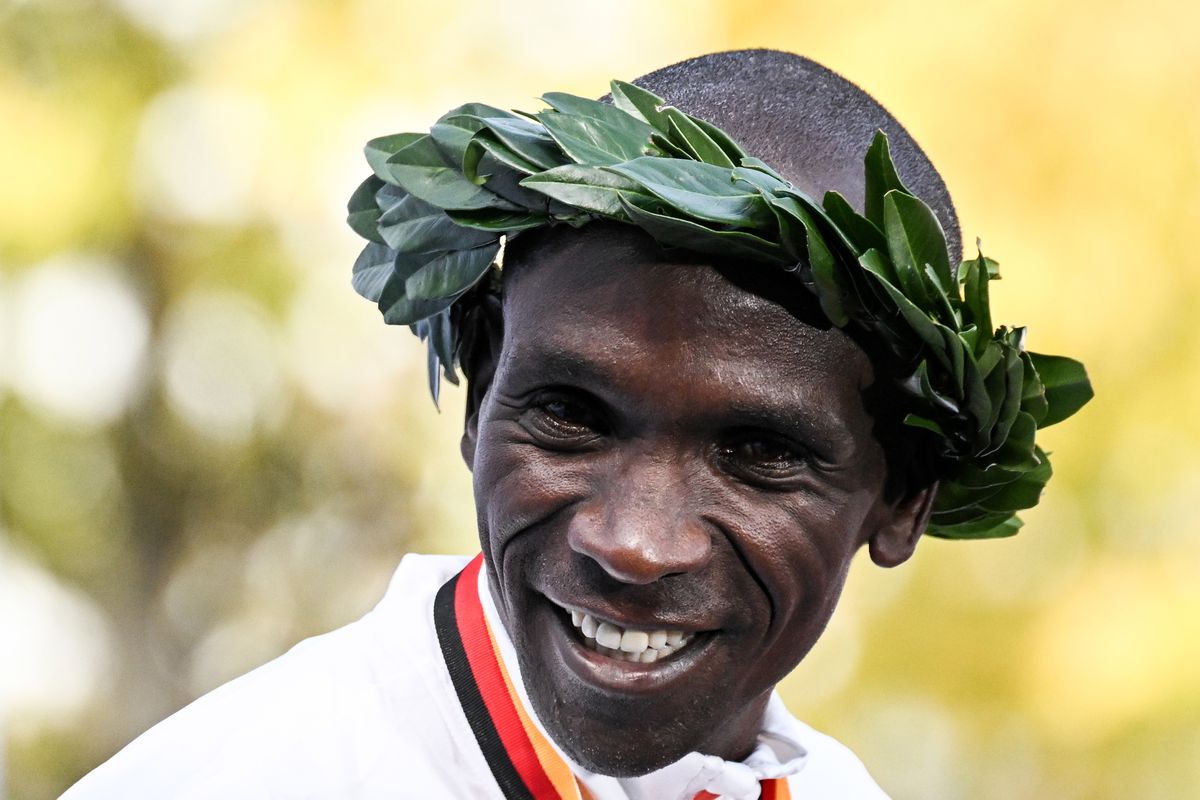 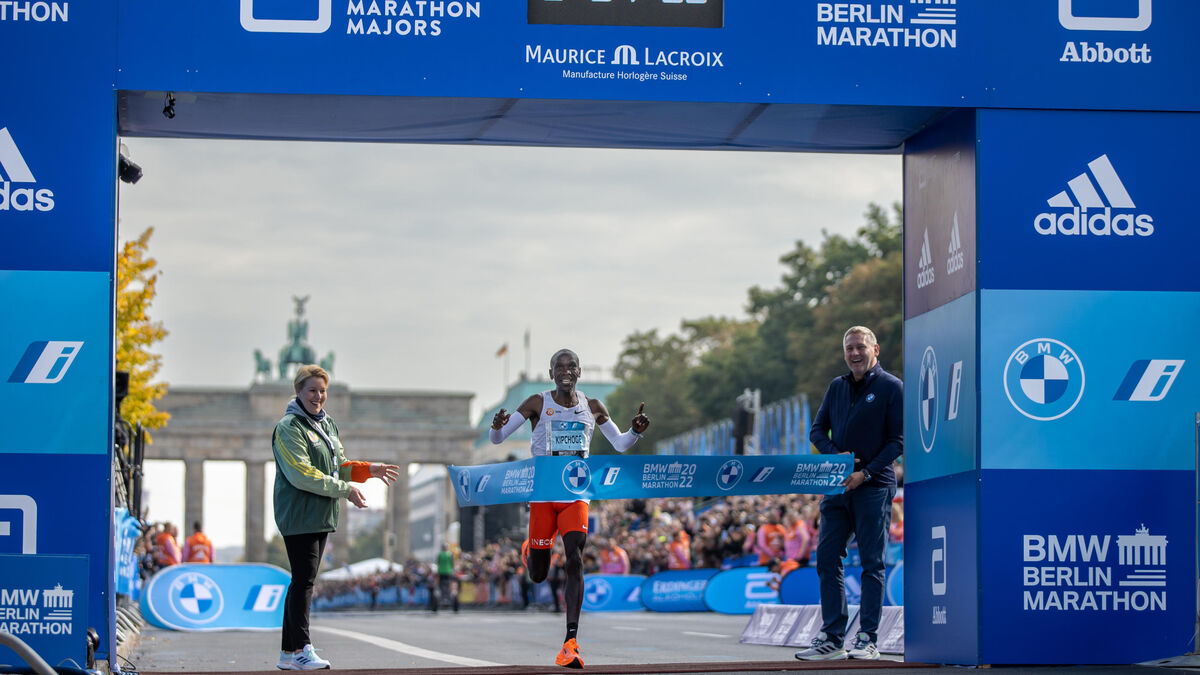 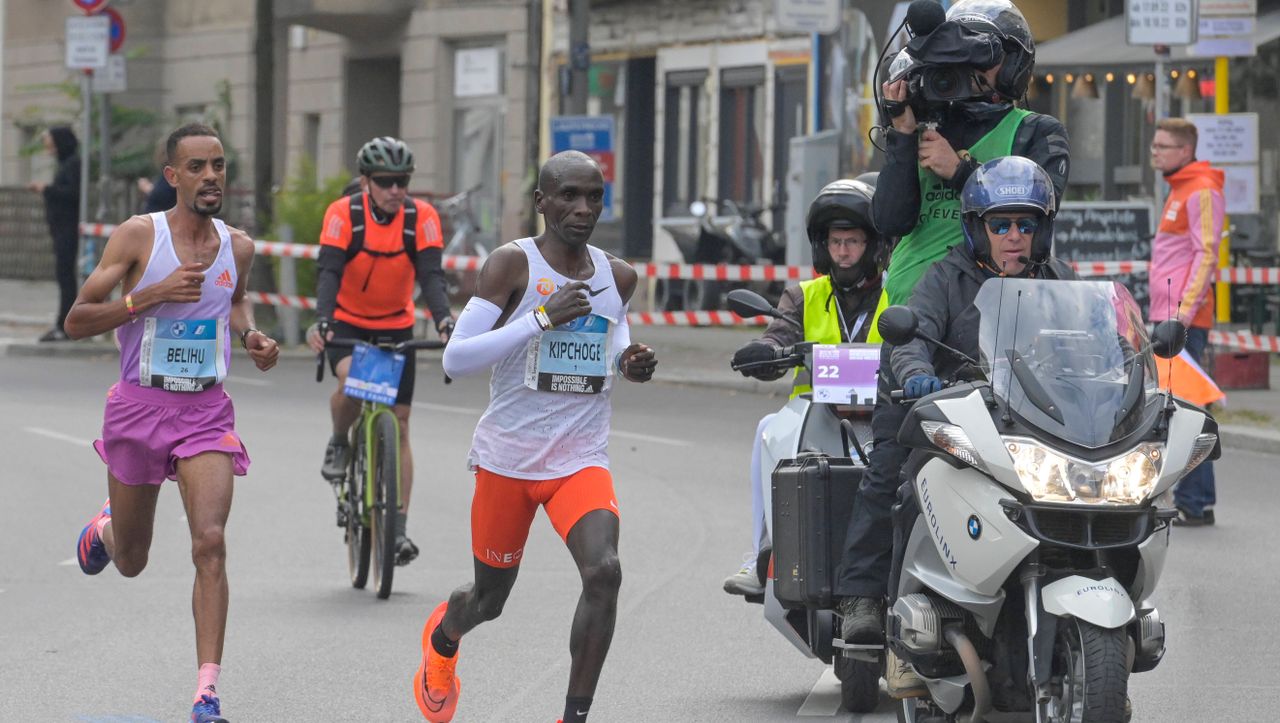 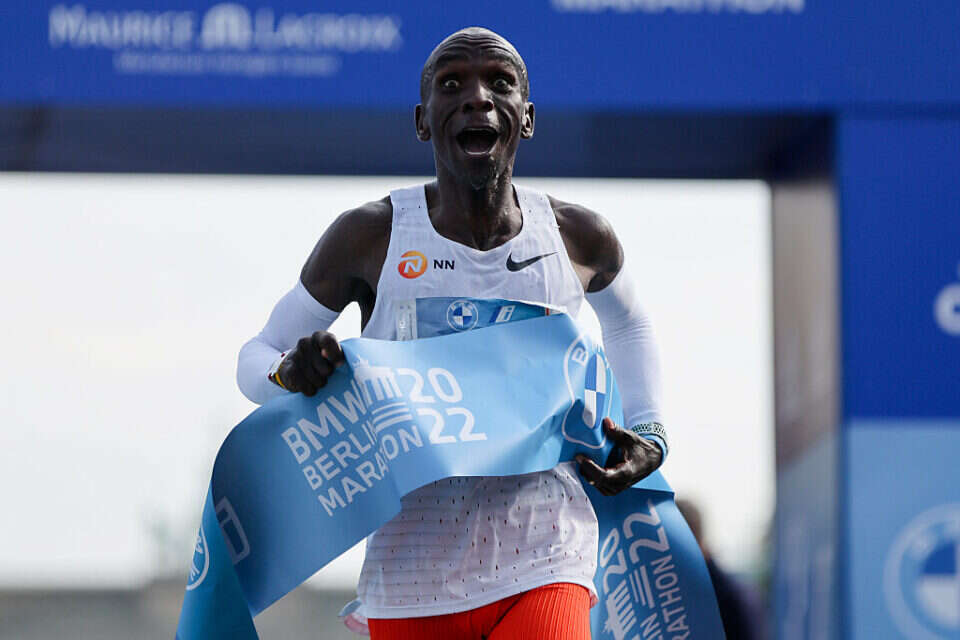 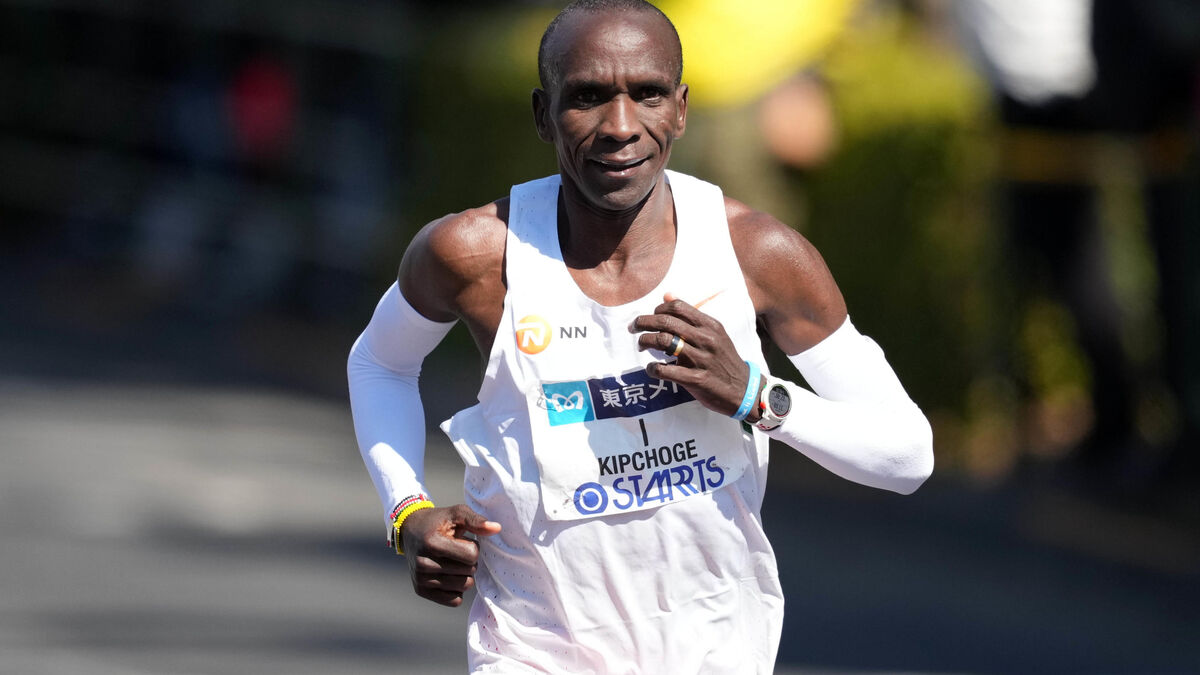