The cup final, Tomer Ginat, the injury in Jerusalem, Israeli society and the old saying against "Hatikva": Hapoel Tel Aviv star in a special interview

Jacob Brown: "I want to play in the national team. Ready to do whatever it takes"

The cup final ("I'm still burning"), Tomer Ginat ("I will never understand the rivalry"), the injury in Jerusalem ("I thought I wouldn't play anymore"), Israeli society ("Maybe we'll get married") and the old saying against "the hope": "Ready Stand for the anthem, want everyone to love everyone."

The Israeli national team ended its appearance at the European Championship on a sour note about two weeks ago.

She was eliminated in the group stage and did not qualify for the round of 16, when many accusations were made against various parties - and among other things, the question arose as to whether the basketball association is wrong when it does not naturalize a foreign player, unlike teams such as Spain, Turkey, Slovenia and Poland.

During the Eurobasket, Jacob Brown sat in his home in Tel Aviv and watched the games.

Brown, a player for Hapoel Tel Aviv, will soon start his sixth season in the Premier League.

He has been in Israel a year less than Miguel Vitor, but a longer period than Enrique Saborit who was recommended for citizenship last week.

"I didn't miss a game of the team in the European Championship," says Brown in a special interview with Walla!

"I think these guys need to continue to grow. They put a lot of pressure on Danny Avdia to become the main man, but you have to understand that they should do it together. Even if they don't add me, they need to bring a big man under the basket to protect the ring. I like what That Roman Sorkin, Idan Zalmanson and Jake Cohen do, but they need someone to protect the ring. This will make it easier for Tamir Blatt and other actors to play the pick and roll."

- Your name was unofficially mentioned as a candidate to receive an Israeli passport and join the team.

"I would be very happy to receive an Israeli passport. I am ready to do whatever is necessary, I am free to do whatever is necessary. I want to play for the Israeli national team, and I enjoy seeing some of the players who play in it - not only as teammates, but even as a basketball fan. I feel that if they let me The opportunity to help, I'll be able to help. I just want to win and make the players next to me better. Maybe I'll have to do more things to get the passport, maybe I'll marry my girlfriend, but we still have to see."

"I didn't miss a game of the Eurobasket team."

Brown (32) is one of the special foreigners who landed in Israel.

He led Gilboa/Galil to a great season in 2017/18, then moved to Hapoel Jerusalem for three years, during which he served as captain, among other things, until he was injured and ended his term earlier than expected.

Last season he came to Hapoel Tel Aviv, raised the bar of expectations and reached the final of the State Cup.

Even before the end of the season, he signed a new two-year contract for about $400,000.

"I'm excited and feel blessed that I'm doing something I love to do. I've been doing it since I was three years old. I've always wanted to throw the ball in the basket. If God gives me the opportunity to do something I love, I have no choice but to be happy and enjoy the moment."

- You are staying, but quite a few new players came to Hapoel Tel Aviv this summer.

"I like the new players. We will have to put them together in the right situation, and things will happen. Not everything is good from the beginning, but we will have to be ready. We are playing in the Eurocup, so we cannot start without victories. We have to absorb things quickly, win difficult games and then we will learn More in training how to improve."

- You don't have too much young blood in the group.

"It's always good to come with the players you've been through ups and downs with. We know each other, know how to make it easier for each other. We started last season in a bad way, we tried to understand what to expect. We have a great base. Once we connect the new players, it It's going to look like we've all been playing together for three or four years. At the end we're going to have to show it on the field, it doesn't matter if you have young or old players, we've got to get on the field and see the bigger picture. Find a way to win games and win championships. My job is to keep everyone in the same place."

- Were you surprised when Tomer Ginat chose to return to Hapoel, after being wanted by Maccabi Tel Aviv?

"I will never understand the rivalry between Yellow vs. Adom, Maccabi vs. Hapoel. I didn't grow up here. Tomer's decision was the best for him and his family. This is his career. I respect him, and I would respect him if he signed with Maccabi. He is a great player , and I say this from the moment I arrived in Israel and played against him. I said he is good and knows how to play the game. I am very happy to share the court with him. I don't know where the rivalry comes from, I heard some of the things. This is basketball, and you always have to think about yourself and your family previous".

I still remember the loss well.

We will return to the matter of citizenship.

Hapoel Tel Aviv is working behind the scenes to push for Brown's citizenship, as well as that of JP Tokoto.

However, an interesting issue could arise if such a thing were to come to fruition - as Brown went against the words of the National Anthem.

About a year ago, he explained that "Hope" does not represent some of the residents of Israel, and called for the anthem to be changed.

"It's not that I don't stand for the anthem. If you know me as a person, I just care about people," he tries to explain his position.

"I don't care about the color or the background. I don't care about blacks or whites, Jews or Arabs. I don't get into these things. I wasn't here and I don't know what the people here fought for. I'm just looking at the future, and where my children and my grandchildren will grow up. And I tell my children, I don't care what color your friends are, you treat them with respect, everyone.

"Regarding the anthem - I hear the words, and I'm not against it, but I just want people to love each other like they love their children. I want everyone to love and respect everyone."

- What do you think about players who get citizenship without even being in the country?

"If it can help, why not? Lorenzo Braun did a piece of work. You have to trust the process. The coach of the Spanish national team and the Spanish union trusted him that he could lead them, and that's what he did. Every country believes in something different. Some believe in the local player, but sometimes you have to Help and there's nothing wrong with that. If they ask me to help, I'm always here."

- Do you see a chance that the USA will join this wave and naturalize a European player for the team?

"I don't think America will do it one day, because it is a bigger country than any country in Europe, and it will always find players who can bring a lot to the table.

It's different in the US, but different countries need someone to lift them up."

On the Hapoel Jerusalem bench, after the injury (Photo: Danny Maron)

Brown has had quite a few injuries over the years, but he comes into this season very physically prepared, having lost a significant amount of weight.

"I feel good. Even very good. My goal is to maintain this situation. This is what I will do, this is what I promised myself, to be this season in every match with my brothers, not to leave them alone. I will continue to work, I am satisfied with the progress I made last season , and I intend to continue like this this season as well."

- Do you still think where you could be if you hadn't been injured in Jerusalem?

"Sometimes it still crosses my mind. I try to push those thoughts away. This injury put me in a dark place in my life. I didn't think I'd get back to shooting a basketball. I welcome every day that I can step on the basketball court. I enjoy every opportunity for me to do it."

- The crowd gasps every time you fall.

"I've been knocked down my whole career. What's beautiful about me is that I always get up. This is the story of my life. I came from nothing, I was knocked down all the time, and I was always taught to get up and fight. I play tough, and I will always continue to play like that. Whatever happens happens. If I don't get injured, I won't get injured. I won't go into the season and say, I don't want to get injured. Sometimes when you fall, things happen, I'm fine with that."

- Have you ever thought of changing your playing style to one where you might be less injured?

"If I start thinking about changing the style of play, I have to retire, because I won't be able to help my friends and I shouldn't be on the field. I will fight for everything. I only know one way, and that is to be me. If I'm 22 or 32, I I will always be me."

Brown is celebrating Rosh Hashanah together with his partner, Israeli national team player Shahed Abode, and the relationship between the two is very serious according to his associates.

"I wish mental and physical health, and that things between me and my girlfriend go well, that all my teammates stay healthy. Let's enjoy this season."

- Hapoel Tel Aviv has not won a title for 30 years.

Why should this season be any different?

"Let's take it step by step. We haven't had a single official game yet. I expect something special, and we have to remain realistic. Last season we were short, but things happen. The final against Bnei Herzliya still stings me. I missed a few shots, and lost a final Cup for the first time. My balance was perfect, they scored shots and we didn't. We have to dig deep to get there again."

"The team received a fatal blow, I don't know when the Arab sector will come together again" - voila! sport

Moti Daniel: "I would have chosen Jacob Brown for the Israeli national team, before Lorenzo Brown" - voila! sport 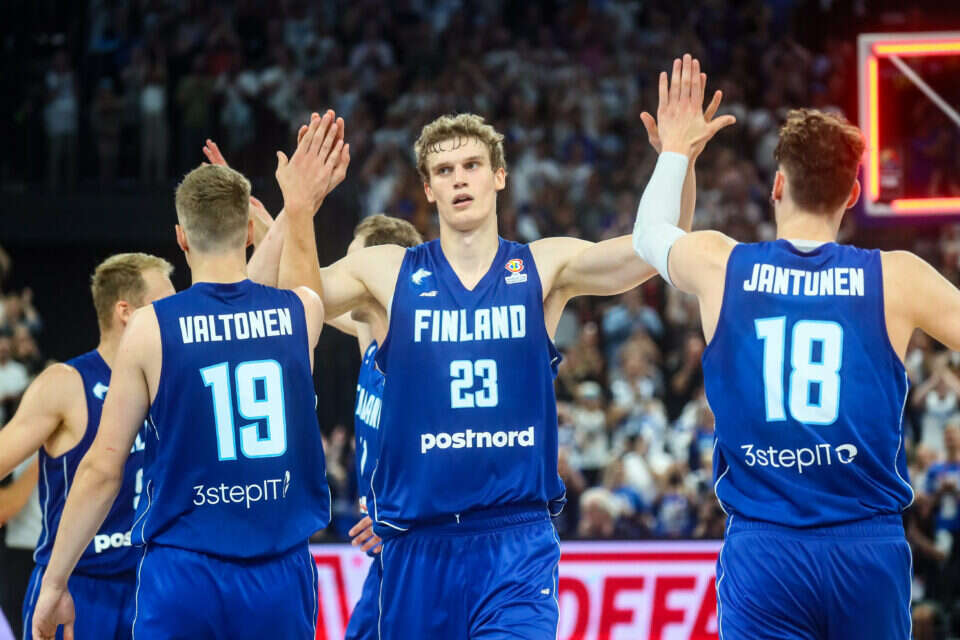 Lauri Markkanen to "Israel Hayom": "Perfect time for us to reach the Eurobasket quarterfinals" | Israel today