Tobias Wolf, keeper of the SG Barockstadt, did not foul the striker of Kickers Offenbach, Philipp Hosiner, in this scene.

Just before halftime, the OFC attacker was the winner against Wolf.

The 1-1 draw at Kickers Offenbach was certainly flattering, but the baroque city had mastered the next enormous test in the regional league with flying colours.

In the end, the OFC players were crushed, the SGB players celebrated with the guest block.

The draw in the duel with ex-coach Alfred Kaminski was flattering overall, but the SG Barockstadt Fulda-Lehnerz will be happy to take it with them on the journey home to Fulda.

Only the injury to Leon Pomnitz will spoil the mood at SGB, who was badly fouled by Kickers player Björn Jopek in the second half and had to leave the field, supported by teammates and a physiotherapist.

SG Barockstadt fights for a draw at Kickers Offenbach

The initial nervousness was noticeable in the SG Barockstadt.

The shape of the stadium on the Bieberer Berg screams for the 2nd Bundesliga, the fans on the Waldemar-Klein-Tribüne ensure the right mood.

6561 spectators were there - the majority of the SGB actors played in front of such a backdrop for the first time.

Kickers Offenbach had an enormous phase of pressure in which the game was played almost exclusively in the guest half and Marius Grösch had to clear a shot from Philipp Hosiner from the line (3').

But the Kickers didn't keep up the pace for long.

After a quarter of an hour, the baroque city began to come into play better.

Will Siakam had two good chances (22', 31'), Moritz Reinhard the biggest when he failed from close range at the great reacting David Richter (36').

And when the players were about to go into the half-time break, OFC struck: Lucas Hermes freed Hosiner in the penalty area, who scored over Tobias Wolf (45').

The half-time walk of the baroque town players was accompanied by goal music.

Calm and looking for playful solutions.

The equalizer followed exactly that pattern: Leon Pomnitz marched through half of Offenbach, found Reinhard, whose shot at the far post pushed Siakam over the line (51').

The SGB fans, who packed the guest block on the Bieberer Berg, chanted “Away win, away win” in a moment of silence.

Kickers Offenbach close to winning the game in the closing stages

Of course, the home side wanted to prevent that, although the game became quieter in the middle of the second half.

The baroque city was satisfied with the interim result, meanwhile it was clear to the OFC that they wanted to avoid mistakes and that the strong performance of the SG baroque city made an impression.

In the final phase, however, the OFC increased the number of strokes again and had a number of chances to decide the game.

The SG Barockstadt only rarely found the way to a good graduation opportunity.

Aaron Frey headed in from a corner, but headed over it (69') and Marius Löbig, who was in the OFC block together with Kevin Hillmann when he was young, missed the greatest chance after the equalizer when Reinhard gave him space, the winger however, free-standing only hit the outside netting (70th). 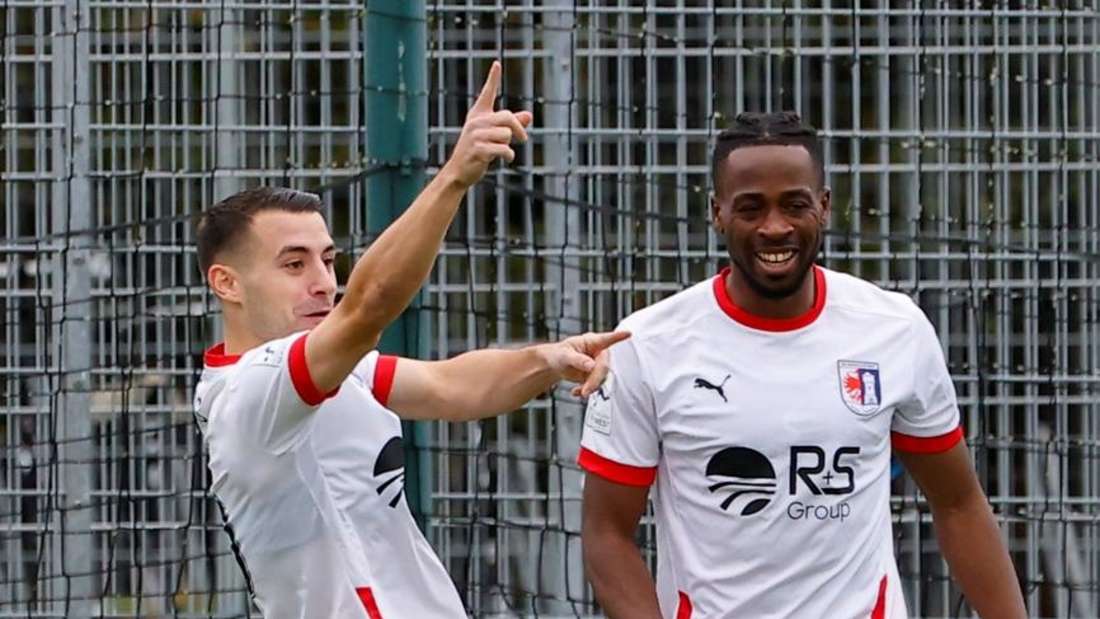 Despite a flawless Löbig hat trick, SG Barockstadt does not win

SG Barockstadt remains undefeated in the fourth game in a row

After a cold shower: the baroque city celebrates and beats Bahlingen