A staff manager with rivers of ego in a masterly way, sees things before everyone else, changed the hegemony in Israeli football. Ron Amikam crowns Barak Becher the great winner of this season's game

Barak and Ream: Barak Becher is the big winner of this season's game

A staff manager with rivers of ego in a masterly way, sees things before everyone else, changed the hegemony in Israeli football.

Those who look at the league this year clearly see the big gaps between the two big leagues and the others.

The 0:3 of Hapoel Jerusalem over Maccabi Haifa will not confuse you, these are events that happen, but not much.

Hapoel Be'er Sheva, with an extraordinary tactical stance, will also be able to score points from the two big ones.

Sometimes, it's also a matter of momentum and this momentum creates the classic.

At this point in time, the Israeli classic is very similar in essence - and there are still thousands of differences - to the Spanish classic.

In these games the consciousness is created who is stronger, who is more attractive, who is of better quality.

Barcelona of Messi and tiki-taka dominated the Spanish Clasico while Real Madrid dominated the Champions League, because these are two completely different frameworks.

Real Madrid rattled before their matches against Barcelona and played as usual against all the other European powers.

The coaches in Israel also understand what this season's game means, what it points to and what happens to whoever wins it.

No one will say after the sixth round who will be champion, but the observer from the sidelines can decide who is dominant here.

And you approach such games with a clear ideology regarding the perception of dominance.

Therefore, it is not clear what happened yesterday to Loaden Ivić, how he gave up the game, how he was wrong in every professional decision he made, how he actually understood from the beginning where the dominance would go.

The reactions of the Maccabi Tel Aviv players at the end, led by Ivitch, indicated a show of hands.

If we hesitated in deciding whether this game was a knock-out or a victory on points - because of late goals, because of Saborit's gift - the coach came and admitted fully: "They were better".

Then they said there not to attribute "because we would have lost in the whole vehicle".

Maccabi Tel Aviv came to the game yesterday with more points, with a decisive goal difference, with 10 different scorers in five rounds, inflation of decisive players and it came not to lose.

Maccabi Haifa has so far offered an impressive qualifying campaign, a crazy half against Paris Saint-Germain that ended in a loss and a second team that is far from the performance of the first team.

Barak Becher came with almost his strongest lineup because he knows that a team that competes at the highest levels should beat any team that doesn't compete there.

Came to win and that's the whole story.

You look at the matchups and you don't understand a bit.

In front of the Maccabi Haifa link, which is a fan of five players, all of whom are players with technical abilities, deep passes and kicks from a distance, Maccabi Tel Aviv is setting up a carpentry.

I mean, Golsa was a creative player in the past and he is still creative within the limitations of the role assigned to him, and Gabi Kanikowski can play very offensively, if he has someone with him.

You don't expect Glazer and Dor Peretz to play tiki-taka, and with three aggressive brakes positioned to stop Piero and two wingers coming into the middle, you don't have a link.

Maccabi brought in two Dutch players: Derrick Lucassen, who was supposed to overuse three brakes, none of whom is a natural brakeman, and Joris van Overeem, who is probably gifted with technical abilities.

Giving up the two Dutchmen and relying on uncreative players, tied Maccabi Tel Aviv to a game that is not based on dominance, but on brilliance.

The dimension of speed should be added to this: Maccabi Tel Aviv cannot play fast in such a lineup against a team whose main weapon is speed, movement and moving the ball.

Ivić chose Eran Zahavi to play as a lone striker.

When there were three strikers in Maccabi Tel Aviv, they wondered what would happen when all three were fit and indeed the question was answered immediately with the release/departure of Peritza.

Instead of taking advantage of two strikers, a veteran and a young one, technical and deadly, players who fascinate an entire defense - and add to them Oskar Gluch who quickly enters the areas and can endanger the goal, Ivić gave up putting all his eggs in the basket and divided the minutes between them.

The best player cannot function when he has no one to play with.

Eran Zahavi, nor Djorja Jovanovic are strikers who know how to create situations for themselves, nor Piero.

They need someone who will share the territory with them, who will pull the brakes and clear areas for them.

Beat the pain: B-Cure laser in an unprecedented experience sale

He pitted Nagariya against the very diverse link of Maccabi Haifa.

The criticism of Eran Zahavi is more deadly than the sum of his errors in the game.

Something in him is off, lacks energy, and it seems that a lack of confidence sticks out in him.

The statistics say that he was not a threat to the goal.

He had, only he was not counted because he was different.

Zahavi got into a gap that he usually didn't get into, the bounce over Josh Cohen was weaker than he usually does, and the rebound was also picked up by Sean Goldberg.

That is, Zahavi performed actions that were not his own, and the whole situation looks like a hologram playing with the yellow shirt number 7.

The injury in the preparation came after the strange injury at the end of the season in Eindhoven, with surgery in the middle, the overflow of emotions back to Israel, as well as the early elimination from Europe in relation to the other two strong Israelis, the numbers which are getting smaller and smaller next to the story of the room.

Even phenomenal people can get into a spin.

Like a hologram playing with the yellow shirt number 7. Zahavi (Photo: Maor Alxalsi)

Even before his horrible delivery to Ali Muhammad yesterday, I could not understand why Maccabi Tel Aviv submitted a request for the citizenship of Enrique Saborit and for what reason the Ministry of the Interior should approve it.

Is it because of the flood of citizenship submissions and the approval of Ali Muhammad, or because someone there thinks that Saborit should play in the Israeli national team devoid of defensive players, as Miguel Vitor does with considerable success.

That is, in the reality where defenders are wing-backs, those who move quickly on the line, Saborit no longer fits, if he ever fit, and their brake is a solution to an array of three brakes, less two.

That is, if Maccabi Tel Aviv wanted to tempt the Ministry of the Interior with its abilities to help the Israeli national team, it seems that this is not the case.

Would you put Saborit ahead of Sean Goldberg or Doron Leidner?

So I hope Saborit will get citizenship in any case, because he and his family tied their fate with Israel, but not because of the Israeli national team.

He might have fit when there was no national team here, now a little less.

And that's an understatement.

Why did Maccabi Tel Aviv apply for his citizenship?

We do not compliment Barak Becher enough who beat Vladan Ivic yesterday for the first time in his career.

Becher didn't do anything extraordinary, tactically or mentally, he remained the same Barak Becher who lost almost every chance to Ivic, but he made the Serb change.

And that's a double win.

Bacher manages a crazy staff, with rivers of ego, in a way that is more than exemplary.

Dean David, perhaps the most reviled striker in the stands of Maccabi Haifa, scored a double yesterday in a season game, one on the heel.

Along the way he was preferred and then not, in the lineup that Bacher led this season.

David is very close to 50 goals in the Premier League and he is only 26 years old. In Ashdod he also played in the second league, and in a team that probably scores fewer goals, but Becher took him from there to Maccabi Haifa, because he saw in him what we don't see: a striker who works on the field, that recognizes opportunities and reaches them.

So he misses, but this tells him that he reaches situations that he will eventually conquer from.

This is exactly what happened yesterday.

This is exactly what makes Bacher a training monster that probably wasn't here.

This is exactly what makes the hegemony in Israeli football.

Bacher saw what we don't see.

Below this column the talkbacks will appear soon.

Every week I run into them.

Most of them are written by very young people who treat the opposing entity in an unsportsmanlike and inappropriate way.

Ham also kidnaps, and every week is identified with a different team, according to what he writes. This is no longer trash talk and it has long been no longer a matter of social networks. The incident yesterday before the game, in which Maccabi Tel Aviv fans were attacked for no apparent reason, is a process Very dangerous, just like what happened yesterday between the players in the locker rooms in Netanya, in the match between Maccabi Netanya and Hapoel Beer Sheva.

Maccabi Haifa and Maccabi Tel Aviv have never been ideological rivals, neither have Maccabi Netanya and Hapoel Beer Sheva.

There have been sporting events - which probably usually end in victory for one side - that have caused bad blood.

There is no opposing ideology here, there is no political strawman here, there is here a battle for sporting hegemony or a case of a game in the end of which one team is relegated and another is saved.

This is not a North London derby, not a Balkan derby and certainly not a religious clash between Celtic and Rangers fans.

It's just football, one time up and the other time up.

Relax, it's really not worth it.

Neither pyrotechnics, nor punches, nor tattoos make fans bigger.

Orlando Sa: "Barak Becher is the Israeli Mourinho. He is a level above everyone there" - voila! sport

Becher is preparing for a "celebration", and commented to the Haifa players: "I didn't like the attitude" - voila! sport

Celebrations at Maccabi Haifa, Barak Bacher: "We haven't felt the stadium shake like this for a long time" - Voila! sport

For more news: Maccabi Haifa will receive in the lottery an opponent it has never met - voila! sport 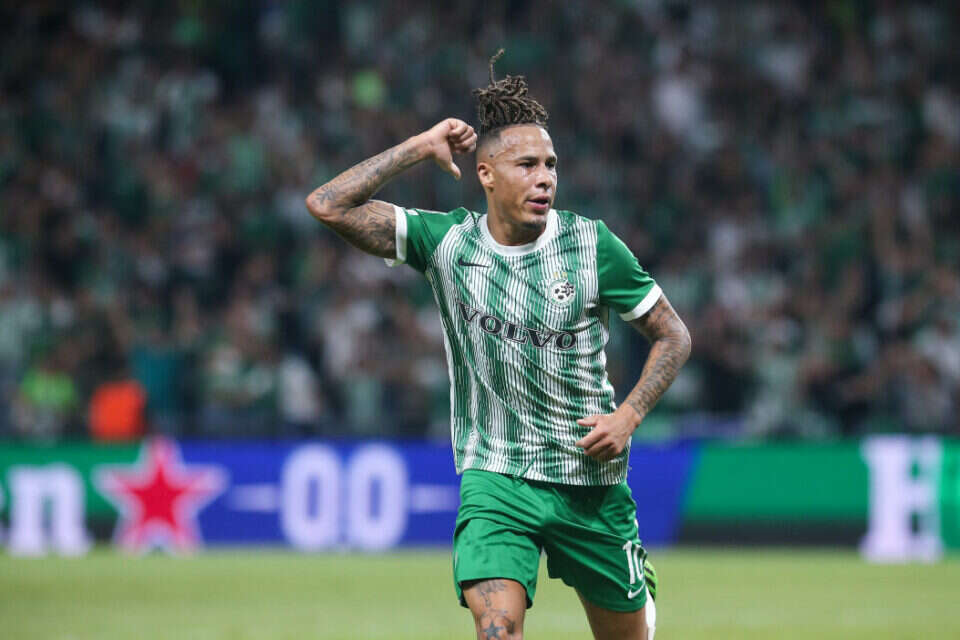 Maccabi Haifa is ready for Hapoel Jerusalem: "We want to come to the game this season with a perfect record" | Israel today