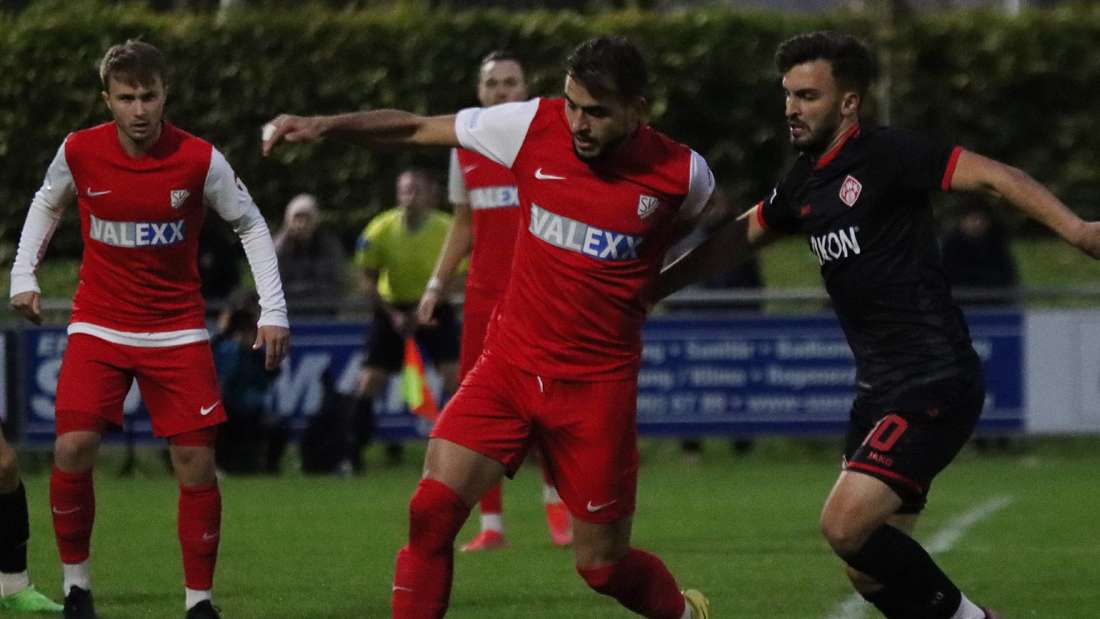 Heimstetttner Mohamad Awata (middle) sees the red card, here in the Friday game against Würzburg, in the holiday game at SpVgg Hankofen-Hailing.

An early red card for Mohamad Awata inhibits SV Heimstetten, who also had to cope with two Corona failures, in the regional league game at Hankofen-Hailing.

– There are currently hardly any more thankless tasks than a job in defense at SV Heimstetten.

Not only that the club's traditionally holey defense is one of the weakest in the entire regional league this season.

But on top of that there is also a kind of curse that preferably haunts the defenders of the SVH.

And it is with sad regularity that they no longer experience the final whistle of a game because they have either been substituted due to an injury or have been sent off.

It is possible that Mohamad Awata had bad suspicions when he had to help out in the central defense of his team in a duel at SpVgg Hankofen-Hailing due to the precarious personnel situation.

And indeed, the 29-year-old was caught after just under half an hour.

Because that's when Awata saw the red card - at a time when his SVH was already 0-1 behind.

From then on, his colleagues tried honestly outnumbered, but in vain.

And so in the end there was a 0:1 defeat, which left the SVH on the last place in the table.

The Heimstettner would not have actually wanted to go to Lower Bavaria after two players had canceled the evening before the game as a result of positive corona tests.

But the opponent refused to move the game, reports SVH coach Christoph Schmitt.

And so he had to play with a skeleton team for the newly promoted team from Hankofen-Hailing: only two injured players and two U19 players were still on the bench.

Nevertheless, the guests started energetically and had the first chance of the game through Emre Tunc.

However, the hosts scored the first goal a few minutes later – through Timo Sokol, who took a shot from the edge of the penalty area and scored after an extended throw-in (12').

"It was definitely not an intelligent duel from him," commented Christoph Schmitt on the dismissal.

"But in this scene you can also give yellow."

Despite being outnumbered, Heimstettner presented themselves as equals, although the hosts had more and better chances in the second round.

In one scene, however, the SVH just missed the equalizer by a hair's breadth.

After Meriton Vrenezi dribbled in the 71st minute, a player from Hankofen involuntarily cleared in the direction of his own goal – but only hit the post.

And so the hosts were finally able to save their lead to the finish, while Heimstetten once again came up empty-handed - as in ten of 14 league games before.

"I'm satisfied with how we performed in view of the general conditions," emphasizes coach Schmitt.

"The boys fought back against the defeat and did well.

Unfortunately, they were not rewarded for it." (ps)

Haching puts the lid on late SV Heimstetten vs. VfB Eichstätt LIVE: Who gets big points in the basement duel? Türkgücü offer agrees with Heimstetten – "it was a financial decision" FC Bayern II: Martin Demichelis threatens to fall on the relegation zone in the regional league with U23 SV Wacker Burghausen against TSV Buchbach LIVE: red and white in the derby with a strong Sigurdsson team at home

Mannheim's away misery continues in Ingolstadt

What is Robert Lewandowski doing at SV Heimstetten?