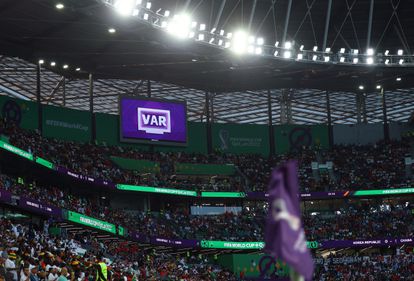 The sign with the intervention of video refereeing during the match between South Korea and Ghana. MOLLY DARLINGTON (REUTERS)

There is no case.

He's been trying for a while but can't.

I can't get a headline, as I would like, Varvaridades.

Let's see if somebody helps me.

For now, my machine tells me that this doesn't exist, that the title, if anything, should be Barbarities and that it doesn't bother me anymore, that that word I want to put is a Chinese invention.

My machine thinks it knows more than me.

It must be true: with your megabillions of chips and links and wikis I can't compete.

But I liked the idea of ​​the Varvarities and, above all, I don't like the idea that a conspiracy of ones and zeros claims the right to tell me what is right and what is wrong, what should I do.

I'm telling you because, once again, you beat me to it.

It is what has happened to us for only thirty years, so I am getting used to it.

In this one it was about VAR: you said, yesterday, that VAR is FIFA's attempt to show that she is better than Lassie, honest as a chicken.

The attempt has, it is true, all the traces of a FIFA maneuver: the thousand and one ways to spit up.

I don't know how you make love or how you answer the phone or how you would manage to simultaneously, but I do know that VAR destroys the heart of football: the immediate, cheap, overwhelming emotion.

We have said so many times that the best thing in football is the goal, that explosion: the VAR vaccinates, inoculates, castrates.

So far, when a ball went into an arc and the

I hadn't raised the flag, it was the dust and the call and everything else at the same time, already shouting and jumping and knowing that something important?

What you saw was what it was – and that is something that does not happen in almost any field, accustomed as we are to deception, secrecy, hiding.

With VAR, nothing is what it is: when the ball enters, a period of deliberation begins, of nerves, of not knowing what to do;

If later they tell you that it was a goal, that delayed cry – “overheated”, you say – is not the same as the present of the ball entering;

But, in addition, VAR is bad for humanity – if you'll excuse my bombast.

The VAR is my computer correcting my words but wildly and with no turning back: a great triumph of the so-called artificial intelligences over natural ones.

The machine imposes its rules against the perception of humans – and we believe it more than we do.

After they say the Singularity is a danger.

In short, that VAR is worth it, that we enjoy football as long as little people of meat continue to play it – and not, for the moment, holograms that are all the more perfect.

here, for now, perfect is none.

The group stage is over and the only one who is emerging as a great player is Mbappé, and no one has really marked him yet.

While looking for more candidates, I listened to Scaloni: man has the advantage of not wanting to speak in esdrújulas like Bielsa or sculpt commonplace in marble like Bilardo or pose as a revolutionary after working for dictators like Menotti;

Scaloni speaks simply, without turning around, and the other day, after the game with you, he said something that is so simple it is very complex: that a football match is just a football match, that it cannot be filled with so many meanings and so many expectations that it becomes difficult to do anything.

And I thought, following his words, if the problem of the Argentine team was not Argentina.

"You lose, you win and tomorrow the sun rises the same," said Scaloni.

Interestingly, if our team could understand that, they would win much more often.

But those boys carry the weight of the Homeland on their shoulders.

And the Homeland, you know very well, is a piece of lead gum.

The Homeland: any homeland.

A few days ago we talked about the sadness of seeing Messi become a propagandist for the Saudi dictatorship for a few million.

Today I find that Xavier Hernández does the same job for the Qatari: your quoque, Xavi, you do this to me, if because of your quality I always said that Messi was the best player in the world and the second best in Barcelona.

Now this man, who lived and played there, who is a friend - they say - of his royal family, argues that "there is a very big prejudice and a lot of criticism towards Arab culture".

I still like reading Omar Khayyam and Ibn Batuta and Naguib Mafouz, or listening to Umm Kalsum; do you too?

What I don't like, it's clear, is that these wrens discriminate and exploit and kill.

Not that the best footballers defend them: will it be the price of playing so well?

Meanwhile, today the first groups are over.

The beloved Ecuador was left out at the hands of Senegal, the Netherlands flew by low as if it were a ditto country and the lowest of all was Qatar, not one point.

In the other group, the two empires – the current one and its mother – prevailed: England with authority, the United States suffering – as it has done so long – with Iran.

It was strange: at times I wanted Iran to win and I wondered why encourage a brutal regime and he didn't want to tell me that it was to lower the Americans and he answered me that it was because of those players who had silenced their anthem – but they sang it again after the threats – and so on.

One of these days we should discuss why we want someone to win, or lose which: the reasons are usually unreasonable and whims, minor lies.

Meanwhile, tomorrow we have a big date:

Envy, I already told you, and a hug.