These are the reasons for the AstraZeneca vaccination backlog

Only about every sixth dose of the AstraZeneca vaccine delivered has already been inoculated - but not because of widespread skepticism, as a query from the federal states shows. From now on everything should go faster. 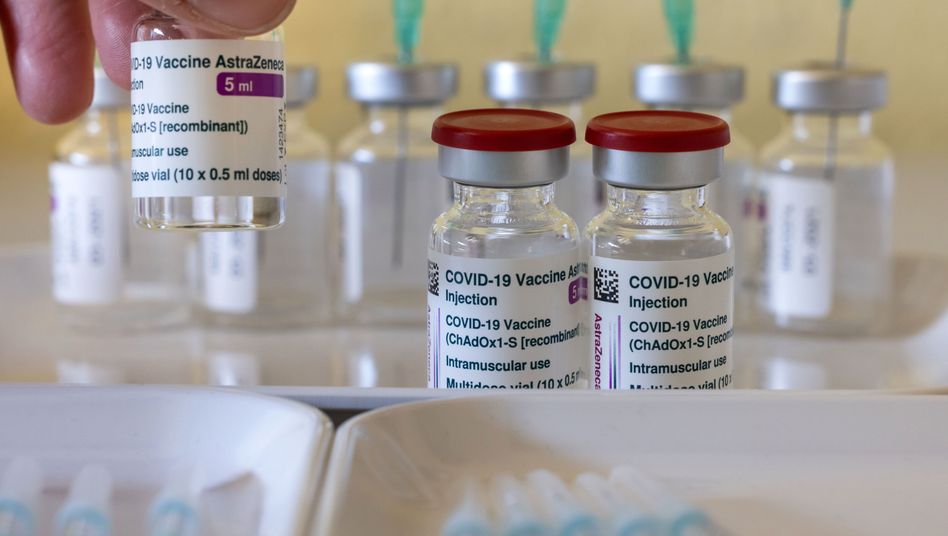 3.2 million doses of the AstraZeneca vaccine should be delivered by Thursday - according to the RKI, only 514,000 doses have been vaccinated so far

In the federal states, after the hesitant start, hope is growing that the AstraZeneca vaccination backlog will be eliminated quickly.

Several countries are expecting a significant increase in vaccinations with the British-Swedish vaccine, as a query by the German press agency revealed.

Until recently, only a small part of the cans supplied had been used.

The reason for this is by no means just skepticism about the vaccine.

A total of almost 3.2 million doses of the AstraZeneca vaccine should be delivered to the federal states by Thursday, according to information from the Federal Ministry of Health.

According to the Robert Koch Institute (RKI), however, only 514,000 doses had been administered up to and including Monday.

Because it can take a few days for vaccinations to be reported to the RKI, the actual number can also be higher.

Compared to the vaccine quantities, the vaccination rate currently seems manageable: On Monday around 59,000 people were vaccinated with AstraZeneca, over the two weekend days it was around 91,000.

If the pace continues, there could be

by the end of the week

How more should be vaccinated now

The AstraZeneca vaccine is currently only intended to be administered to people under 65 years of age because only a few older people took part in the studies relevant for approval.

The Standing Vaccination Commission (Stiko) has announced that it will reconsider the recommendation in view of new data.

But how the decision will turn out is still open.

The changed age range was an enormous challenge for vaccination logistics.

Because originally people over 80 years of age should be vaccinated with the highest priority because they have the greatest risk of becoming seriously ill or even dying from the consequences of a corona infection.

However, since AstraZeneca was not approved for them, more vaccine was available for other priority groups than initially thought.

In several federal states, vaccination appointments are already being made for the second priority group, others are planning this - and thus millions of people could soon be entitled to an AstraZeneca vaccination.

In North Rhine-Westphalia, for example,

around 750,000 kindergarten teachers, day-care workers, elementary school teachers and patrol officers are to receive a vaccination offer from Monday

"We just want to vaccinate as much as we can," said NRW Health Minister Karl-Josef Laumann (CDU).

In Hesse, 12,000 doctors and medical staff have recently received their AstraZeneca dose, and teachers, educators and police officers will soon have their turn.

Is AstraZeneca really that unpopular?

Skepticism about the vaccine also seemed to be a reason why AstraZeneca doses went unused.

In Berlin, those entitled to vaccinate initially had the choice of which means they wanted to be vaccinated with.

As a result, many opted for the vaccine from Biontech, which has been shown to be more effective in studies.

However, the president of the Paul Ehrlich Institute (Pei) responsible for vaccines, Klaus Cichutek, emphasized that the AstraZeneca vaccine was "highly effective".

According to an initial data analysis from Scotland, the risk of having to be treated in hospital for Covid-19 drops by up to 94 percent - and that after the first dose with the AstraZeneca vaccine.

In any case, the reservations are apparently disappearing: Brandenburg reported an occupancy rate of around 90 percent for appointments at the start of the week, in Thuringia the vaccination appointments for staff at daycare centers and primary and special schools were assigned within a few hours.

Baden-Württemberg is also seeing greater demand for appointments, and there are few reservations among teachers or educators.

In the meantime, more than a million people in the country are also entitled to vaccinations, it says from there.

The federal states had previously increased capacities in the vaccination centers.

The city of Krefeld in North Rhine-Westphalia shows how things could be done quickly.

There, 600 employees of schools and daycare centers were vaccinated with AstraZeneca doses received at short notice and not planned on Tuesday - six days before the nationwide vaccination start for this group.

The reasons for the slow start

The experience from the countries also shows: The skepticism about the vaccine is only part of the truth, why doses were initially unused, there were also a number of other obstacles:

Pei President Cichutek emphasized that there have been no unexpected side effects from vaccinations with the vaccine from AstraZeneca.

"The cases of sick leave due to flu-like symptoms among nursing and hospital staff correspond to vaccination reactions, which was to be expected after the clinical trials." In all reported cases, the symptoms subsided after two to a maximum of three days.

The spokesman for the federal government, Steffen Seibert, recently refused to give the impression that the vaccine was simply lying around unused.

Vaccine could be delivered relatively fresh at first, withheld for a second vaccination or not yet vaccinated, but intended for certain vaccinations.

Nevertheless criticism of the vaccination concept

In the opinion of the social association VdK, the states should still speed up.

"The vaccine is there, but some of it goes to waste in the vaccination centers," said President Verena Bentele.

More and more members reported to the association who were chronically ill or disabled and wanted to be vaccinated, but were desperately waiting for appointments.

The VdK complained that the federal government left the procedure to the states and district administrators.

They are obviously hopelessly overwhelmed by finding people with chronic illnesses and disabilities.

Health Minister Spahn spoke out on Wednesday in favor of extending the recommended interval between the first and second vaccination for Biontech vaccines to six weeks and for AstraZeneca to twelve weeks.

“Then we can do more primary vaccinations.

At AstraZeneca, the effectiveness is even better, ”said the minister.

In fact, initial study data suggests that AstraZeneca's vaccine may work better if the second dose is given later.

(Read more about this here.) SPD health expert Karl Lauterbach has also spoken out in favor of delaying the second dose.

According to his calculations, which he and his colleagues published in a so-called preprint, this could prevent hundreds to thousands of deaths in the next six months.

The UK had already decided weeks ago to give the second dose in an emergency much later than originally planned.

However, countries like Germany and the USA have so far ruled out this step. Business leaders want to solve the vaccination problem: A company shows how it could work These are the reasons for the AstraZeneca vaccination backlog