First drive in the Mercedes EQS: Daimler wants to attack Tesla with this car

For years, Mercedes drove behind in e-mobility, now the EQS luxury sedan is coming. It is intended to underpin the Swabians' claim to leadership - at the expense of their previous flagship. 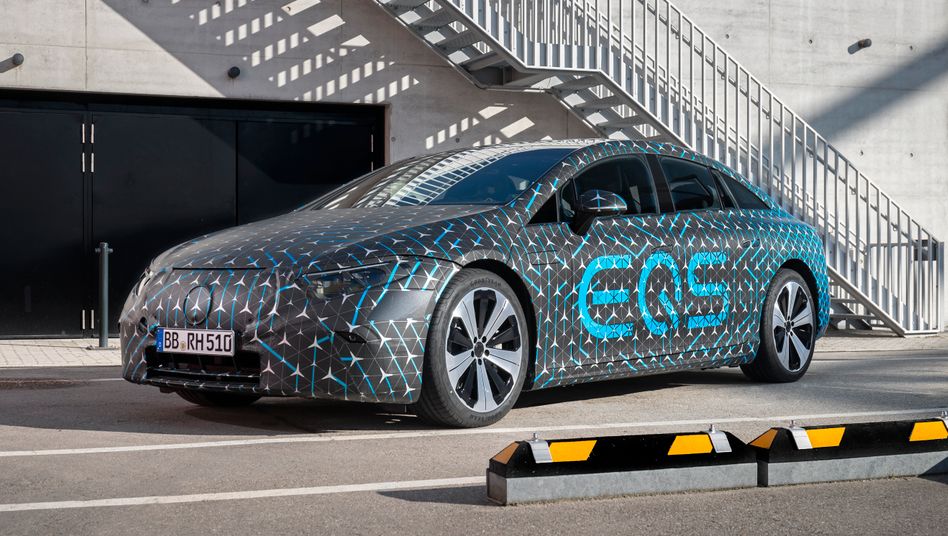 This is a simple introduction to the electric age: As soon as you stand in front of the camouflaged prototype, the door swings open as if by magic.

Before that, the door handles, recessed flush in the sheet metal, had automatically met.

All of this happens when you approach the Mercedes EQS car with the key.

The brand with the star urgently needs such an aha effect.

So far, the Swabians have not had any convincing answers to Tesla's triumphal march and the electric mass mobilization demanded by the state.

Cars like the EQC or the EQA came late and are half-heartedly converted combustion engines.

They do little to oppose the electric models manufactured by the VW group, such as ID.3 or Audi Q4 e-tron or the Teslas, which are manufactured in a modular system.

The expectations of the EQS, this huge hatchback sedan drawn in an all-encompassing arc, are correspondingly high.

"As a premium manufacturer, Mercedes must not just be a follower in electromobility, but must shine with innovations," warns automotive economist Stefan Bratzel from the Bergisch Gladbach School of Business.

"Otherwise the star will fade."

The EQS must show how Mercedes is redefining electromobility.

For this purpose, Mercedes is now also building on a platform specially developed around the electric drive, the so-called Electric Vehicle Architecture (EVA).

With it, the first EVA offshoot EQS will celebrate successes as an electric alternative to the S-Class in the luxury segment.

At prices that, according to information from corporate circles, start below 100,000 euros, it will show limits to cars such as the Porsche Taycan, the Audi e-tron GT derived from it and of course the Tesla Model S from autumn onwards.

An electric sedan in the format of the E-Class and two luxury SUVs will follow later.

Can the Mercedes EQS even meet the demands of the Tesla Fighter?

"The Mercedes will of course score in terms of material selection, processing quality and driving comfort," says electric car expert and frequent driver Stefan Moeller, who runs an e-car rental company and has been drumming on YouTube and at events for the drive transition for years.

"Coupled with the premium service promise, it will convince buyers who are currently not attracted by a Tesla." Both brands were not necessarily competing for the same customers.

The head of the Center Automotive Research in Duisburg, Ferdinand Dudenhöffer, trusts Mercedes that the EQS will redefine the term luxury for the electric car age.

If Mercedes implement its promises, the EQS sedan could establish a myth like the S-Class once did.

As it should be in this segment, Mercedes is boasting with the EQS: "In the largest expansion stage, the battery has a gross capacity of 107.8 kWh, with which a WLTP range of 770 kilometers is possible," says Starzynski.

That would be 100 kilometers more than the best Model S and currently a world record.

A Tesla Model S with a range of 840 kilometers has been announced for the end of the year.

This means that it does more than an S-Class with a V8 engine and, despite its 2.4 tonnes, is noticeably faster to 100 km / h in well under five seconds.

That is probably not enough for those frequent drivers who fly over the left lane with 250 things, but more than enough for the electric world, in which even powerful cars usually roll over the right lane at recommended speed - with regard to the range.

Unlike the competition, Mercedes does not show off its fabulous fast charging performance, which is usually only achieved for a short time anyway.

“Our goal is as wide a plateau as possible, on which we can charge for a long time with high output,” says Starzynski's second husband, Oliver Röcker, on the exit.

Electricity should flow for 300 kilometers within 15 minutes.

It takes more than large batteries and powerful motors to attract attention in the growing fleet of electric cars - as Tesla has shown with the Falcon Doors of the Model X or Byton with its screen landscape in M-Byte.

Mercedes picks up on both ideas excellently with the EQS: The Swabian answer to the gullwing doors is the open sesame effect when getting in.

In the struggle for the largest cinema, the design team relies on the »hyperscreen«.

This is what Mercedes calls the surface made of slightly curved aluminum silicate glass, which stretches almost from door to door at 1.41 meters.

It has an effect similar to that of the empty cockpit of a Tesla: It looks different than anything that has existed before.

Either you love it - or you feel lost in virtual reality.

Fascinating graphics prevent this fear - on the display behind the steering wheel, on the two touchscreens in the center console and in front of the front passenger.

In addition, adaptive algorithms make operation easier: instead of letting the driver delve deep into menus, the artificial intelligence always brings those tiles to the front that are currently needed.

All of these are promises.

In order for them to come true, the car and driver have to get used to each other.

But what already comes with the first ride is that feeling of grandeur as in the S-Class.

And that in a modern, cleaner, cooler - and quieter.

Because the EQS offers less resistance to the wind with a drag coefficient of 0.20 than any other luxury sedan, there is hardly any rustling or whistling to be heard.

The already quiet electric motors are encased in insulating foam.

Even the usual hum of the Stromer is completely swallowed up.

And because the air suspension irones away any unevenness in advance, the occupants feel very padded.

There is plenty of space for this.

Because the electric drive requires less installation space, the axles move outwards and there is more space for the passengers.

The EQS measures a proud 5.21 meters, as much as a normal S-Class.

At 3.21 meters, however, the wheelbase is on par with the stretched S-Class.

Backbenchers can stretch their legs even further than in the long version.

Because the tailgate extends into the roof, the already huge trunk can be expanded like an SUV.

Up to 1800 liters are possible, which is enough for some purchases in the furniture store.

All of this shows that apart from the letter in the type abbreviation and the claim to leadership, the EQS and S-Class have little in common; this also applies to materials and decorations.

There is therefore no front loading space, known as Tesla's »Frunk«.

Mercedes has also composed its own fragrance: "Linnen Number 6": Sounds like Chanel Number 5, but smells of linen and green fig.

"But of course we use a lot of technologies that are familiar from the S-Class," says Rücker as he glides through the Stuttgart area.

These include the head-up display with augmented reality displays, assistance systems that come close to autonomous driving and rear-axle steering.

Thanks to it, the luxury liner curves through narrow streets like a small car.

Yes, a new star is really rising in the car sky.

But the EQS also makes another celestial body fade: the newly introduced S-Class.

Just recently celebrated as "the best luxury sedan in the world", despite all its achievements, it suddenly looks like the most modern classic car of all time. 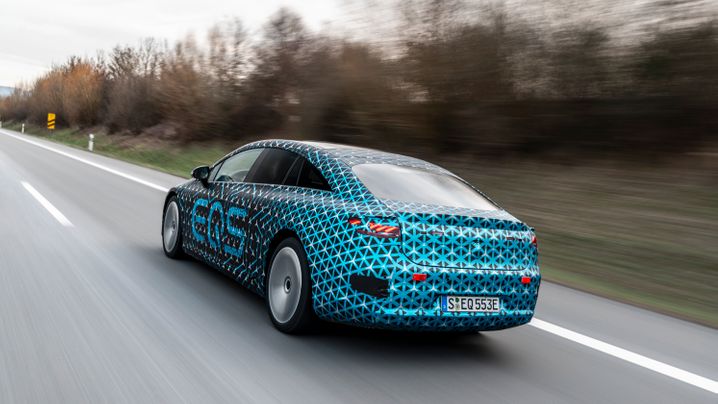 First drive in the Mercedes EQS: Daimler wants to attack Tesla with this car 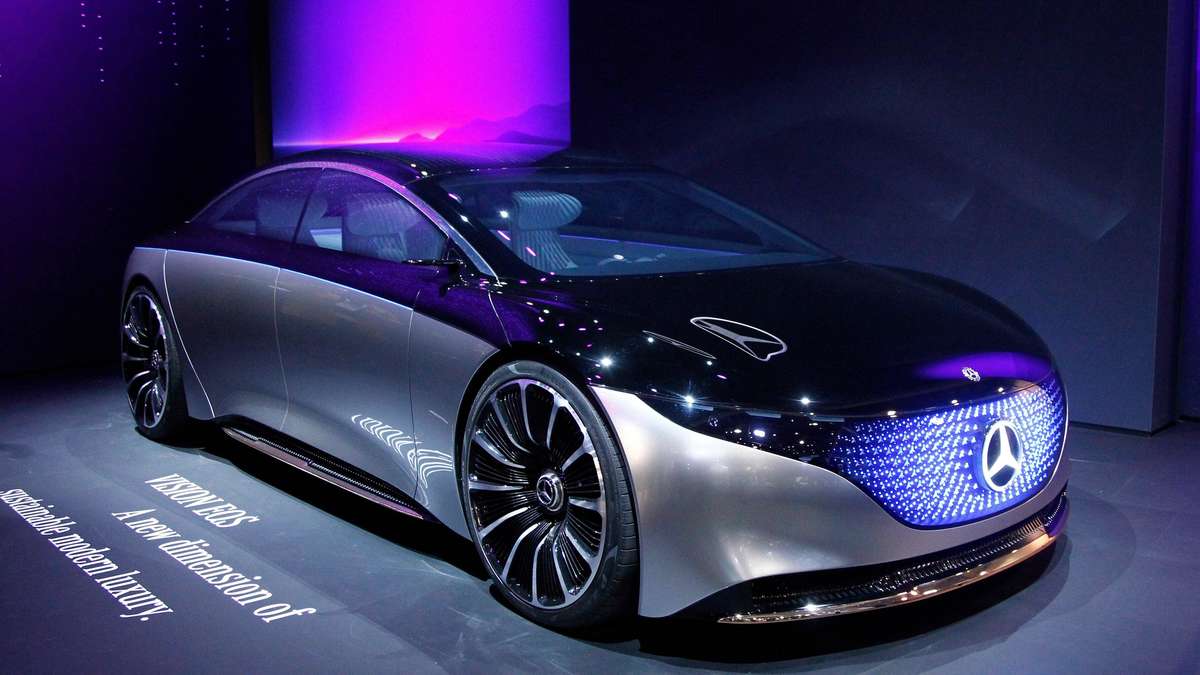 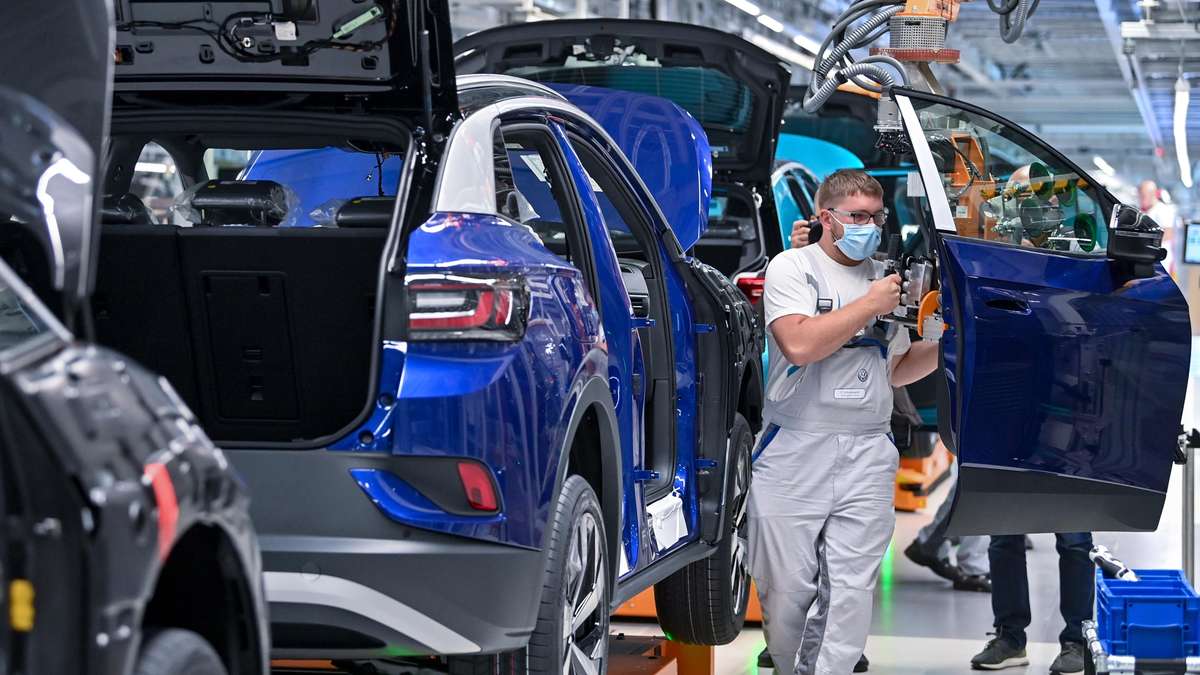 Tesla's e-cars: VW, BMW and Audi hit back with force - a rival is already in the fast lane

Tesla's e-cars: VW, BMW and Audi are now striking back with full force - one manufacturer is particularly good

Tesla's e-cars: VW, BMW and Audi are now striking back with full force - one manufacturer is particularly good