The LiveLeak portal made headlines around the world with brutal accident videos and execution clips. After 15 years it is enough for the developers of the Schocker platform - if not quite yet. 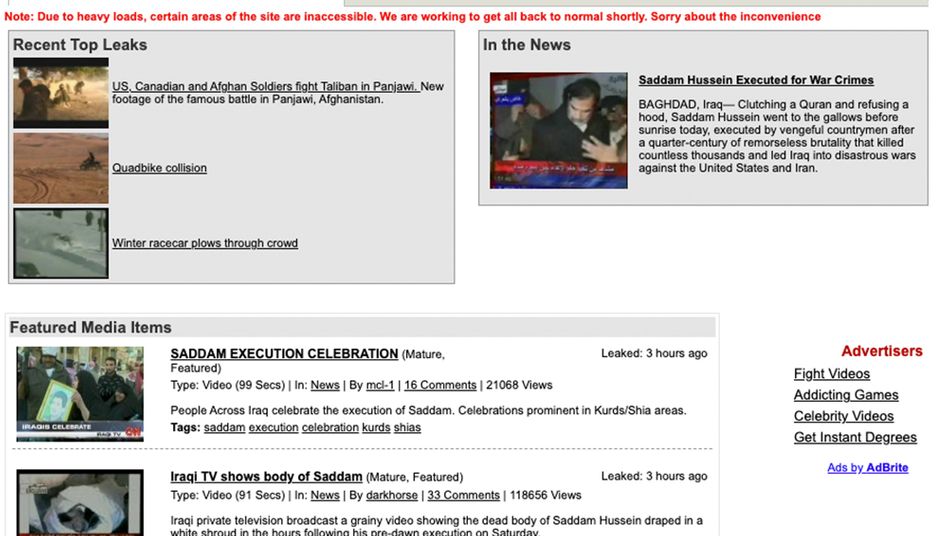 LiveLeak in December 2006: Back then, LiveLeak's homepage was all about the execution of the Iraqi dictator Saddam Hussein

A motorcyclist tears his finger open in an accident, a naked man burns himself on a high-voltage line and a police officer shoots down a suspected robber: The British video portal LiveLeak has become famous for disturbing clips like these.

But now the shock videos are over.

After 15 years, the platform operators pulled the plug.

Co-founder Hayden Hewitt is aimed at fans of the platform and writes: "The world has changed a lot in recent years, just like the Internet and how we humans." He thanks his team and the users who provided him with content "Fascinated and entertained on a personal level".

In his article, he does not say exactly why the project is being ended.

His replies to disappointed fans at the short message service Twitter suggest, however, that it was extremely exhausting to run the site and to defend it against critics from all over the world.

In addition, there was probably a mundane reason for the outsider: money, the operation of LiveLeak was apparently no longer worth it.

In any case, Hewitt emphasizes that LiveLeak was "not a WordPress blog with a $ 2.99 hosting service."

The portal, which is financed by donations and advertising, joined a ranks of shock websites such as Rotten.com when it was launched in 2006.

Such sites looked like the online counterparts to the film series "Faces of Death," which teenagers passed on to themselves on VHS tapes in the 1980s.

Bloody pictures, brute force and corpses: LiveLeak lived on the voyeurism of the users, showed accidents unpixeled, put clips of brutal brawls online and did not shy away from videos of killing.

From Germany, a landing of Lufthansa pilots in Hamburg during a hurricane in 2008 made it into the LiveLeak charts.

That landing was also referred to as a "horror landing" on SPIEGEL.de at the time.

Lufthansa landing on LiveLeak: Whenever things get dangerous, things get exciting for users

LiveLeak came into the public eye for the first time in 2006, when the Iraqi dictator Saddam Hussein was executed.

While most of the European media refrained from showing that execution, LiveLeak showed a full-length video of Saddam Hussein on the gallows.

Hundreds of thousands watched the clip of the execution, believed to have been taped with a cell phone camera, and clicked on another video showing injuries to the dictator's body.

Violence in the live stream: How users should deal with digital terrorBy Sonja Peteranderl

While the LiveLeak operators used the slogan »Media redefined« to advertise the unadorned reality, critics accused the portal of exceeding moral boundaries. LiveLeak showed videos that were too blatant for traditional media. No press code was adhered to, which urges the German media, for example, to forego "inappropriately sensational portrayals of violence, brutality and suffering", to protect children and young people from disturbing images, and not to force victims and relatives, always shocking events to relive.

Hayden Hewitt had always defended the radicalism of his portal.

"In the end, we as webmasters have a certain amount of responsibility," he wrote in a 2008 blog post.

In addition to the pictures of Saddam Hussein's death, LiveLeak was also notorious for clips of beating children, especially in the UK.

In 2007 the BBC reported on violent videos showing, among other things, how a girl had to be hospitalized after a fight with a detached retina.

Unlike YouTube, Hayden Hewitt refused to take the videos offline.

But it is about adopting an uncompromising stance: "When things like this happen in the world, you have to show them too."

There were also limits for the LiveLeak operators

Such quotes also led right-wing populists and terrorists to discover the site for themselves - which made life difficult for LiveLeak operators. In March 2008, for example, they decided to put the anti-Islam film »Fitna« by the Dutch politician Geert Wilders online, in which images of victims of terrorist attacks in New York and Madrid are linked with verses from the Koran. There was fierce criticism and death threats against the platform operators and their families: Ultimately, however, the controversial video was only taken offline for two days - and then uploaded again.

The situation was similarly serious in August 2014. The number of hits on LiveLeak soared at that time, the portal was more popular than seldom before. The reason: The video platform showed a terrorist propaganda video that showed the beheading of the journalist James Foley. The magazine “Business Insider” described LiveLeak as “Islamic State's favorite site for beheading videos”.

While social media platforms such as Facebook and YouTube quickly removed the video, the LiveLeak operators hesitated.

However, concerns that the terrorists might kill more hostages ultimately led the team to delete the "IS" clips.

LiveLeak also banned the Christchurch bomber's videos from its website six years later after an Australian Internet provider blocked access to them.

Even the operators of one of the wildest platforms on the web seem to have come to the conclusion that they had overdone it.

Farewell to the dirty corner

Despite numbers of around 20 million users per month at times, LiveLeak has never reached the dimensions of a YouTube that is a hundred times larger. And LiveLeak was also far removed from the political significance that WikiLeaks has or had. Although vlog channels like "Yoursay" were intended to give the website a political vibe, the platform did not produce any reveal videos. The clips were intended for entertainment, they lived from the shock effect of the images.

After all, some less disturbing videos become viral hits.

SPIEGEL.de also showed in its network show the unsuccessful wheelie of a motorcyclist and the sleeping worker who was tipped out of a wheelbarrow.

With a follow-up page called Itemfix, Hayden Hewitt and his team now apparently want to rely on precisely such videos - in order to leave the dirty corner that LiveLeak quickly got into.

Among other things, with a remix function for videos and stricter rules, Itemfix is ​​now set to become a portal for video hits that spread virally on the Internet because they can be shared without remorse.

The new platform is also not to be understood as a live leak copy, emphasizes Hewitt.

According to the Itemfix rules, it is even forbidden to post videos and comments with "violent or bloody content".

In addition, it is not allowed to encourage someone to destroy property or promote activities that lead to injury or death.

For most users, however, the new site is unlikely to be a replacement for YouTube - unless, after just a few clips, they want to come across a burning moped or a postman who smashes a shop window. 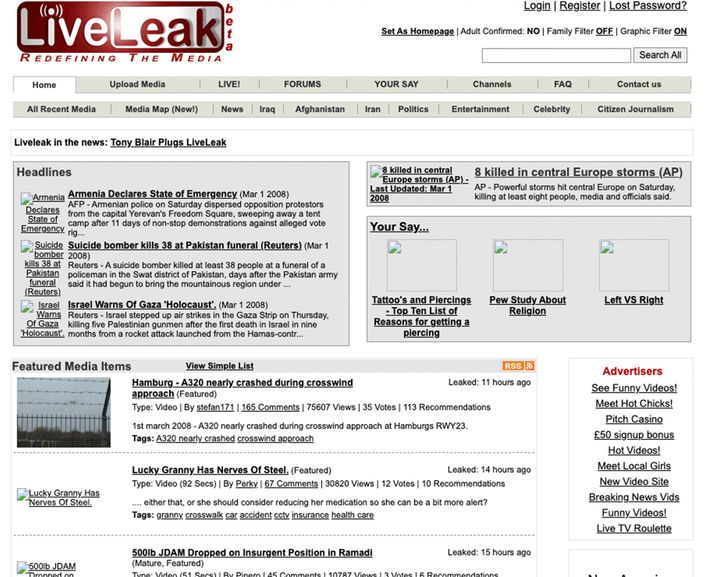 Shortly after the storm on the Capitol: Trump cracks jokes in a good mood - video captures everything

New video captures everything: Trump cracks jokes in a good mood - shortly after the Capitol storm