The RKI registered 94 new coronavirus-related deaths within 24 hours. Spahn wants to reimburse 5.50 euros less per rapid test from July And: How Merkel and Co. protect themselves at the G7 summit. The overview. 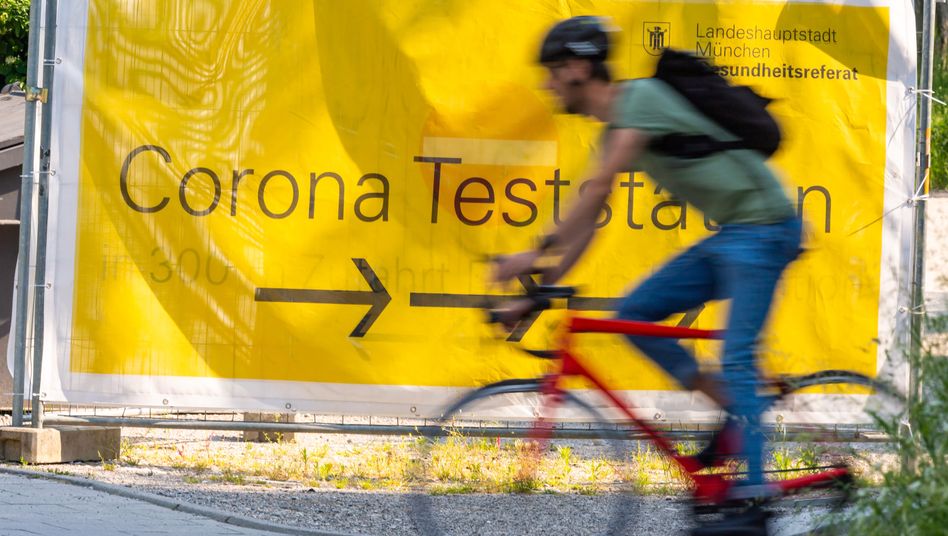 Reference to the corona test station in Munich

US presenter Colbert brings the show back to the audience

After more than 200 episodes broadcast from home, US presenter Stephen Colbert brings his late night show back to the studio - in front of a sold out and completely corona-vaccinated audience.

Guests of the studio show on Monday include Colbert's comedy colleague Jon Stewart and the singer HER, the organizers said.

Colbert took over the "Late Show" in 2015 from David Letterman.

After the restrictions in the corona pandemic, he began to produce the show at home in March 2016 - and spoke out from his bathtub, for example.

G7 summit in Great Britain - How Merkel and Co. protect themselves

Personal encounters between top politicians have become rare during the corona pandemic, summits like the G7 in Great Britain all the more.

But British Prime Minister Boris Johnson, who is chairing the G7 this year, was keen to have a "real" summit - and not just a virtual one.

Thanks to the successful vaccination program, this wish has now come true.

But the protective measures are enormous and have personal consequences.

Chancellor Angela Merkel and her delegation take strict precautionary measures for the trip to Cornwall and then to the NATO summit in Brussels.

Because Great Britain is classified as an area in which a highly aggressive virus variant is rampant, a significantly reduced delegation will fly with her to Cornwall on Friday.

This time, she completely refrains from being accompanied by journalists in the government Airbus.

Merkel is first vaccinated against Corona.

On April 16, she had AstraZeneca inject her.

Thuringia's Prime Minister Bodo Ramelow (left) speaks out after a newspaper report in favor of completely relaxing the corona rules in autumn.

"I think we can take the risk of opening it completely in autumn," he told the Rheinische Post.

But he also knows that 20 to 25 percent of the population will not be vaccinated.

"Then they have to bear the risk themselves and take responsibility," said Ramelow.

Before the deliberations of the state heads of government with Chancellor Angela Merkel (CDU) on Thursday, she told the Rheinische Post: “Mecklenburg-Western Pomerania is promoting that we agree on common rules for dealing with public festivals and major events.

We should proceed as uniformly as possible. «In addition, common rules are needed for regions in which the corona numbers are rising again.

From July, Spahn wants to reimburse € 5.50 less per rapid test

After cases of fraud in test centers, controls are to be tightened and state reimbursement is to be reduced.

From July 1st, private operators of test sites should no longer be able to bill 18 euros, but only up to 12.50 euros per rapid test, as the newspapers of the Funke media group from the draft of a new corona test ordinance by Federal Health Minister Jens Spahn (CDU) to report.

The future reimbursement amount includes eight euros for the service and up to 4.50 euros for material costs.

In addition, the associations of statutory health insurance physicians would be obliged to carry out more checks.

Kretschmer calls for a cost analysis of the pandemic

on Thursday to take stock of the fight against corona and an honest analysis of the financial situation.

»We have to speak openly about the problems, the trauma and the situation of the children and young people.

Also about the costs of this pandemic of 400 billion euros, ”says Kretschmer to the editorial network Germany.

Many new benefit laws in recent years and the efforts made in this pandemic have put Germany in a situation "where there will no longer be any significant new social expenditures to shoulder in the next few years."

The debts should not be passed on to future generations.

"Our generation has to pay back that."