Floods in Germany: the death toll rises to 180, still 150 missing

The region of Rhineland-Palatinate, the most affected by severe weather, has 132 dead and 766 injured. In the neighboring region

In Germany, 180 people were killed in the floods that hit the west of the country on July 14 and 15, and some 150 are still missing or unreachable, according to a new report released Friday by the authorities.

The region of Rhineland-Palatinate, the most affected by the violent bad weather which devastated several municipalities, counts 132 dead and 766 injured, according to the Koblenz police.

In this region, 149 people are still wanted, according to the same source.

"However, we do not assume that the final number of deaths will increase as much", said at a press conference the Minister of the Interior of the Land, Roger Lewentz, estimating that are on the list of the wanted persons residents who are actually on vacation.

The police carry out their searches using helicopters and around 30 sniffer dogs, especially in places where masses of wood have accumulated in the rains.

“I have no way of knowing if we'll be able to find all the dead.

We will not stop ”, assured Roger Lewentz.

In the neighboring region of North Rhine-Westphalia, 47 people died in the floods.

Cologne police say they are looking for two missing or unreachable.

One person also died in Bavaria, in the south of the country, affected by the floods.

The German meteorological services have called for vigilance due to new rains announced for this weekend in the west of the country.

In Belgium, where there are 36 dead and 11 missing, the alert system is called into question.

Victims have indeed complained about not having all the information, especially on a saturated dam whose valves were opened, without all residents having been evacuated preventively.

In a press release sent to AFP on Friday, Walloon Climate Minister Philippe Henry believes that “complete clarity” is due to the population and that his administration must provide explanations.

Luxembourg, the Netherlands and Austria a few days later were also affected by flooding even though no casualties were recorded in these countries. Floods: Over 100 dead - and Germany triggers a military disaster alarm

The floods in Western Europe: Residents began to gradually return to their homes - and found destruction and desolation - Walla! news 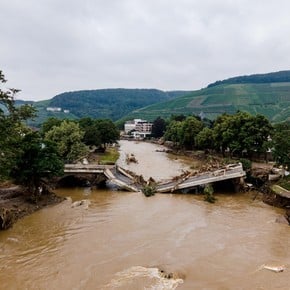 153 dead and dozens missing in floods in Germany and Belgium

The death toll from floods in Germany has risen to 80: "We have never seen such a disaster" - Walla! news