Even without new blockbusters, summer is no longer pickle time for video games. Our tips for hot games nights include the Ninja Turtles, card player tricks and getting started with speedrunning. 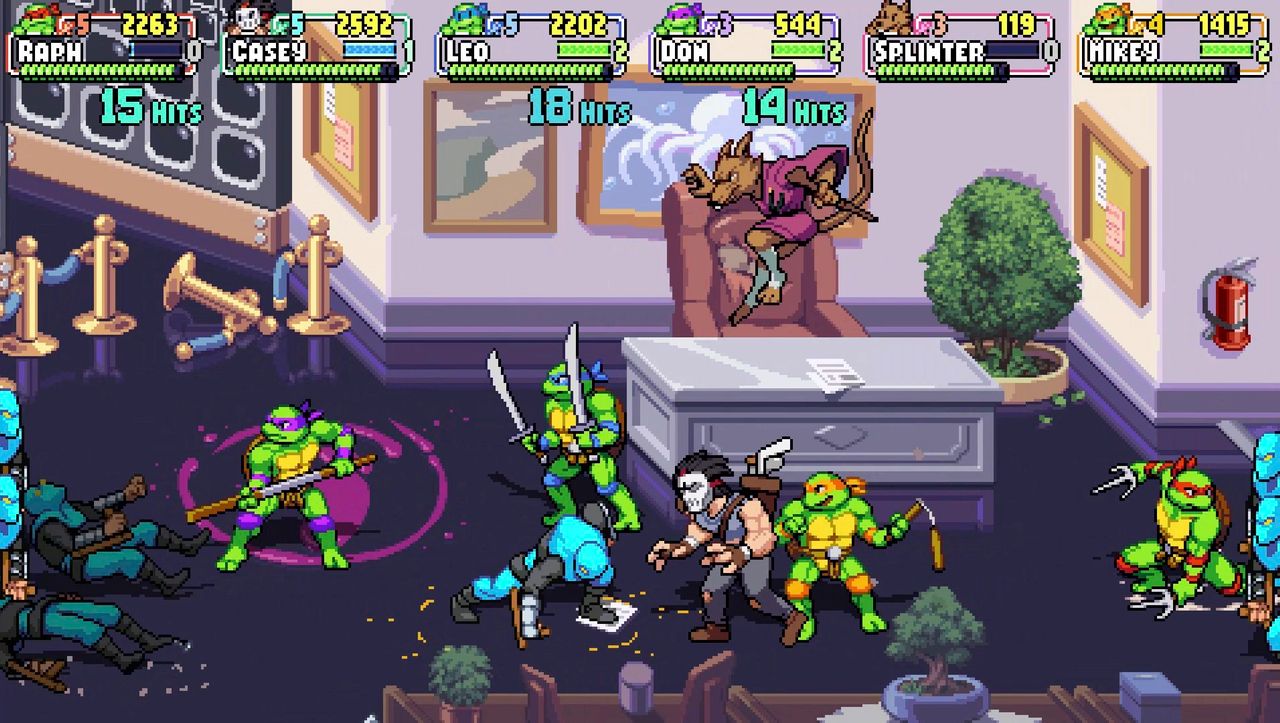 As every year, the major games releases accumulate in the fourth quarter.

Smaller studios therefore have the chance to put their games in the limelight beforehand.

The following indie games are ideal for filling up the hot summer weeks.

We've organized them into categories - there should be something for everyone.

Ninja Turtles are back from the '90s, but not in soulless glossy 3D CGI or free-to-play battle royale, but in a pixel-perfect retro homage to the arcade originals.

In »Shredder's Revenge«, you can take on the form of the four comic heroes, as their teacher Splinter or as tough journalist April against whole hordes of evil Foot Clan fighters in the streets of Manhattan.

It goes without saying that this also works together with friends: up to six players ensure highly entertaining chaos thanks to the growing number of enemies.

Uncomplicated, made with love, quick fun for the group brawl: »Shredder's Revenge« is successful proof that there is still a lot of fun in older game ideas.

There are many card games, but games about playing cards have rarely been seen, just like those played in France in the 18th century.

»Card Shark« is unique, and for that reason alone a recommendation for anyone interested in unusual game ideas.

As a little imposter, we trick our way into the court of the French king in this adventure with ever more complicated card fraud.

»Card Shark« teaches us how professionals cheat at cards: with mirrors, sleight of hand or secret signs of accomplices.

In varied mini-games, the focus is on quick comprehension and memory as well as risk assessment.

»Card Shark« is not simple, but it is unique.

Skeletons, zombies and other undead cartoon monsters have invaded a fantasy realm and heroes are needed.

In the platform brawler »Skeleton Crew«, we fight our way through hordes of small and large monsters, either alone or in co-op mode with up to three other players, solving simple puzzles and unlocking new upgrades and items.

»Skeleton Crew« doesn't do anything groundbreaking, but its stunningly pretty style and a lot of humor make for a good mood, especially together on the couch.

Different heroes and many secrets provide variety even when you repeatedly compete in the levels;

Above all, the absurdly powerful kick of the characters is always fun.

For strategy nostalgics: »Songs of Conquest«

When the names "Heroes of Might & Magic", "Age of Wonders" or "King's Bounty" are mentioned, strategy veterans get glazed in their eyes: the now dusty classic games are generally well remembered.

With its turn-based strategy title »Songs of Conquest«, the Swedish indie studio Lavapotion has presented a game in Early Access that both old and new fans like.

In pixel style we lead our armies across a large world map and in battles against countless opponents;

original is the focus on powerful magic spells that make the tactical battles varied.

»Songs of Conquest« isn't finished yet, but it's already a tip for strategy fans.

Completing a level in the stylish first-person shooter »Neon White« takes barely a minute, and yet you keep starting from the beginning - a few seconds less is still possible for the third, fourth, twelfth time.

»Neon White« makes the attraction of the very special speedrunner niche accessible to beginners without losing its offbeat charm.

The highlight of sprinting through heavenly architecture lies in the collectible playing cards, which also serve as weapons and special abilities when you discard them: an extremely original game mechanic that always provides new playful options.

This role-playing epic will keep you busy well beyond the summer, because thanks to clever random generation, »Unexplored 2« surprises again and again with new adventures, locations and encounters.

One of its makers, the Dutchman Joris Dormans, is a luminary teaching procedural generation at the University of Leiden.

Like Frodo in The Lord of the Rings, we are asked to transport a magical artifact into a volcano - because the journey is long and death comes quickly here, generations of our successors and heirs also attempt this task.

Stylish, difficult, but endlessly fascinating: »Unexplored 2« is a rogue-lite for connoisseurs.

Last year the Viking sandbox Valheim was the surprise hit, this year another indie game from Sweden is causing a sensation: The survival sandbox »V Rising«, in which you terrorize nearby villages as a vampire and compete against powerful bosses together with others or alone , has sold two million copies in the first month since publication.

Still in Early Access, but already an indie highlight that's good for dozens of hours of sandbox fun: »V Rising« looks like »Diablo«, but is actually something else.

Players not only have to fight and get stronger, but also collect a lot, hunt and build a stately dark castle with great attention to detail.

All the trailers and announcements from Sony's State of Olay event - Walla! The gaming channel

All announcements, revelations and trailers from the Summer Game Fest event - Walla! The gaming channel

Gives in mind: All the announcements from the festive event of Xbox - Walla! The gaming channel

Instead of horseback riding: Will the ninja track be part of the 2028 Olympics? - Walla! sport