So far, the Ukraine war has not been an issue on the international space station ISS. But now Russian astronauts have posed with flags of the pseudo-states loyal to the Kremlin. What does this mean for cooperation in space? 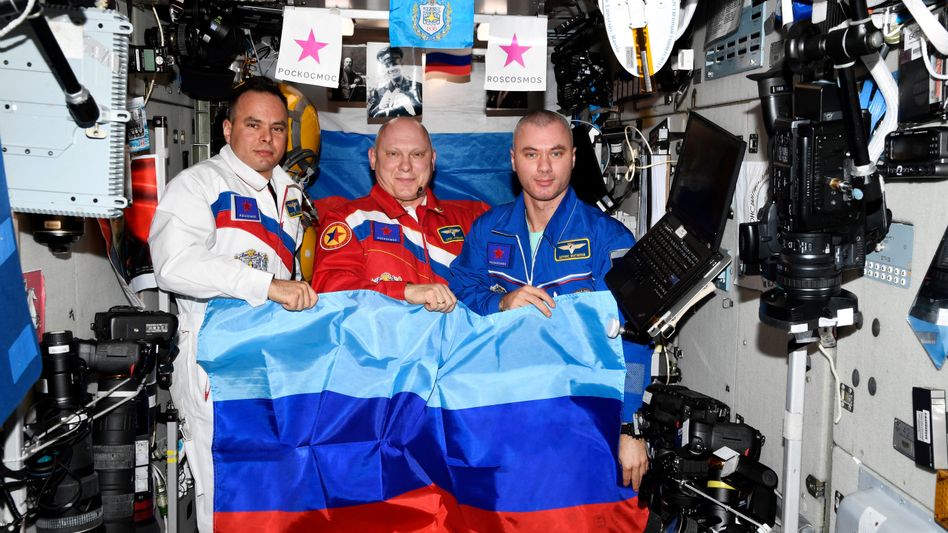 Astronauts Korsakov, Artemyev and Matveyev with the flag of the Luhansk »People's Republic«

Former US astronaut Scott Kelly represents an outsider opinion in the space business.

The quadruple spaceman retired in April 2016.

Some time ago he said that "the murder of innocent people, rape, genocide" at some point "transcends the meaning of cooperation in space."

It is about the question of whether the previous cooperation between Russia and the West in the cosmos can simply continue undisturbed in the face of Moscow's brutal war of aggression in Ukraine.

The majority of the space establishment is more pragmatic about things.

The US and Russia have been the key partners in operating the International Space Station for more than two decades.

Japanese, Europeans and Canadians only have supporting roles.

The permanent human presence in space can only be maintained if the two great space nations work together.

Nasa boss Bill recently said in a SPIEGEL interview that there was "absolutely no excuse for what President Putin did in Ukraine, for slaughtering innocent people, for invading an independent country."

And then the caveat followed: “Nevertheless, there is a space station up there in space that is operated jointly by the Russians and the Americans.

And that will continue in a peaceful and professional manner,” said Nelson.

This kind of denial of reality is nothing new.

When Russia stole Crimea from Ukraine in 2014, NASA nevertheless made serious efforts to place the International Space Station as a candidate for the Nobel Peace Prize.

At the moment, however, efforts to achieve harmony are being severely disrupted.

Moscow's cosmonauts Oleg Artemyev, Denis Matveyev and Sergei Korsakov brought the Ukraine conflict to the International Space Station: They posed on the space station with the flags of the "People's Republics" of Luhansk and Donetsk - black, dark blue, red and light blue, dark blue, red.

Territories created on Ukrainian national territory by Russian conquests are not internationally recognized as states.

Only Russia and Syria are an exception.

Nothing to throw away with the stroke of a pen

What does the provocation mean for the fate of the space station?

Building and operating the ISS cost many billions of dollars.

It is probably the most complex machine that humans have ever conceived and implemented.

And it could, at least according to many experts, continue to serve well until the end of the decade.

Only with the help of the station have the space organizations been able to gain experience with a permanent presence in space.

More than 240 people from 19 countries were guests at the floating outpost.

And for a long time, American astronauts could only get there with Russian help after Washington mothballed the space shuttle fleet.

All of this needs to be kept in mind when considering the station's future.

This legacy is not something to be thrown away with the stroke of a pen.

Possibly staged from the very top if desired

"We are friends with each other and are concentrating on our common goal of continuing our work in space," said the Italian ESA astronaut, who currently lives and works on the space station, before the launch told SPIEGEL.

"I think we're just not going to raise the issue of Ukraine." Humanly, this strategy is understandable.

You live together in a hostile environment in a very small space, you are dependent on each other - you don't want a fight.

But not only since the complete statements by the Russian space chief Dmitry Rogozin, who wants to put an end to Ukraine "once and for all", one has to ask oneself how long one can actually continue to work together with this Russia and its representatives in the tried and tested way and should.

As a reminder, Artemyev, Matveyev, and Korsakov were the ones whose yellow-and-blue outfit caught the eye on the March flight to the space station with yellow-and-blue suits.

For a short time, this was interpreted as a subtle declaration of solidarity with Ukraine.

A short time later, the Kremlin had Artemyev make it clear: “A color is simply a color.

It is in no way affiliated with Ukraine.”

It is possible that the flag show came about at the request of the very top.

At Roskosmos, in the accompanying text to the pictures, one speaks of the "liberation" of the territories concerned.

The fact that the three astronauts are now posing with the national emblems of these would-be states may have more to do with following orders than with personal conviction.

At the end of the day, astronauts are only state employees who, when in doubt, have to do what they are told.

Especially in a totalitarian system.

But can the West once again pretend nothing happened?

Ex-astronaut Kelly has a clear stance on this.

Incidentally, in the same conversation, Kelly was asked whether NASA could not keep the space station in a stable orbit without the help of Russian technology.

His answer: “It would be really, really difficult.

But I think NASA is great at doing very, very hard things.”

Provocative photo in space: Russian ISS cosmonauts celebrate the fall of Luhansk with a flag show 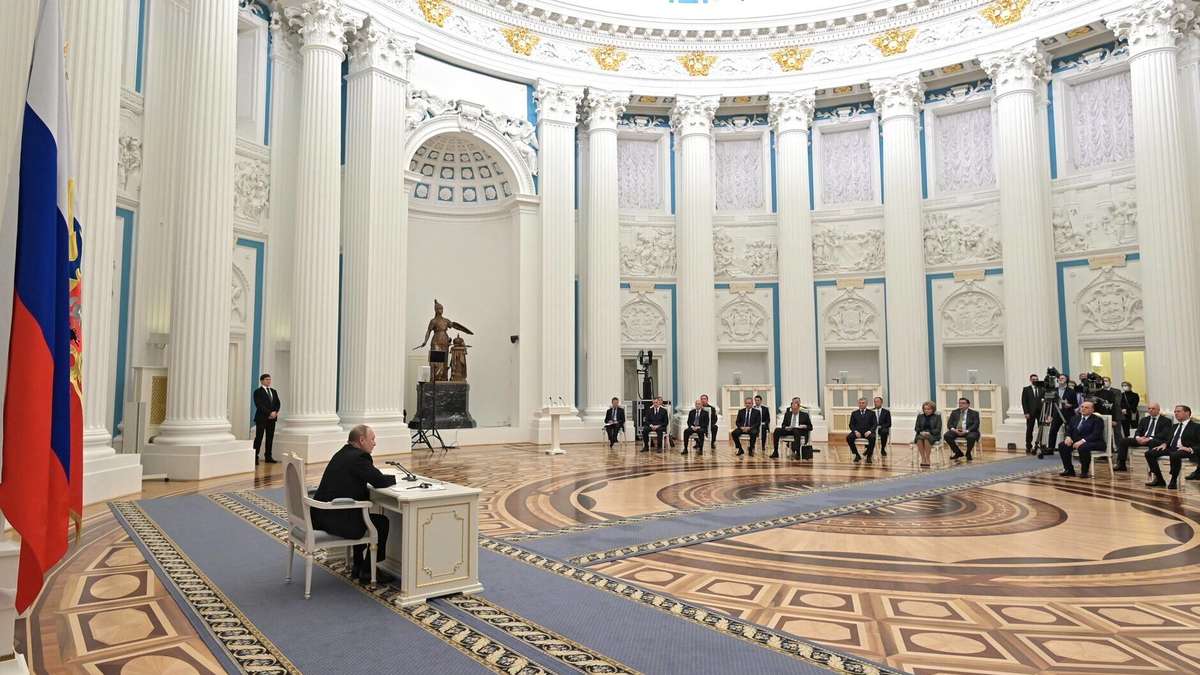 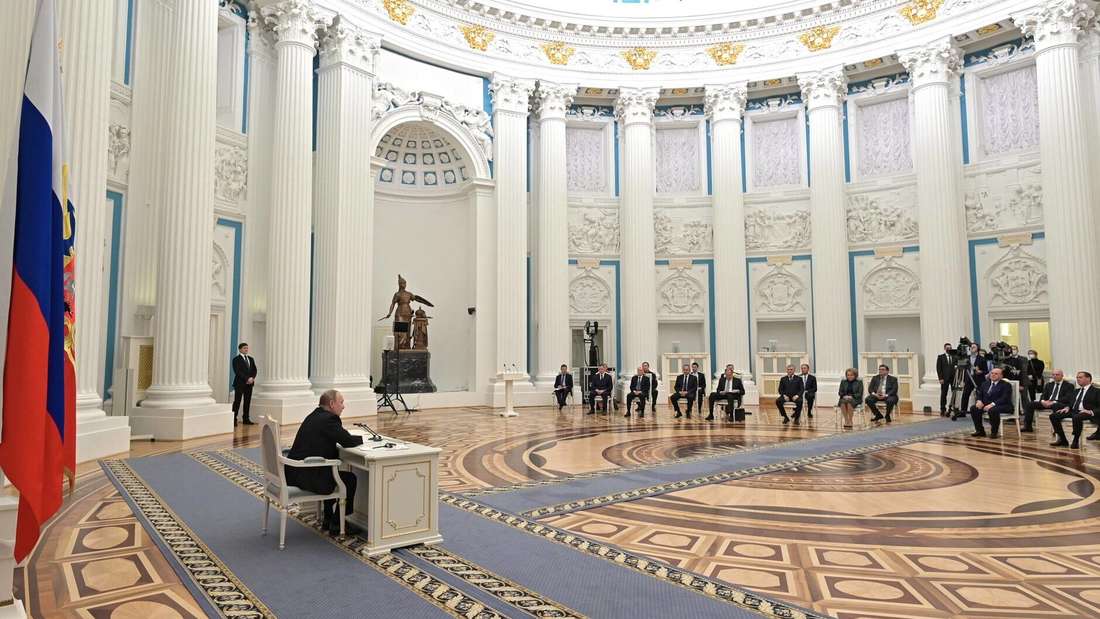 Al-Jaafari: The expansion of NATO to the east threatens not only Russia, but also many countries, which is why Moscow strongly rejected this