At these moments in New York, Samsung is announcing the fourth generation of the foldable devices in the Galaxy Z series. We already have all the details, and we've already put our hands on them

At these moments in New York, Samsung is announcing the fourth generation of the foldable devices in the Galaxy Z series. We already have all the details, and we've already put our hands on them

They were just announced and we already got a first look at the new Galaxy Z series (Photo: Walla! Technology, Yanon Ben Shoshan)

At an international event in New York, Samsung is currently announcing the Galaxy Z Flip 4 and the Galaxy Z Fold 4, the fourth generation of its pair of foldable smartphones with flexible screens.

(We'll call them Fold 4 and Flip 4 for convenience).

"Samsung Galaxy foldable devices are based on our philosophy of openness and offer a variety of new options and full customization, both inside and out. The next generation of foldable devices, created together with our leading partners, offers unprecedented mobile experiences and also caters to dynamic and flexible users." said Dr. Tae-moon Roh, President and Head of Mobile eXperience Division at Samsung Electronics.

"Based on our philosophy of openness and offering a variety of new options and full customization" (Photo: Walla! Technology, Yanon Ben Shoshan)

As part of the innovations in the Flip 4, it is possible to fold the phone (which, as you remember, is in the shape of a clam), partial folding in favor of group selfies from different angles (a feature that Samsung calls FlexCam, and it is adapted for use on all the popular social networks from Meta (i.e. WhatsApp, Facebook and Instagram). Also The ability to perform more actions on the external screen has been improved, including gestures and hands-free use. The Flip 4 also has an enlarged battery compared to the previous generation of 3,700 mAh. There is also support for fast charging. It will come in four colors and the themes can be matched to the colors of the device for design Uniform inside and out.

The Fold 4 has also undergone upgrades.

The device in book configuration now has a better external screen, Android 12 and a 50 megapixel camera as the main camera.

On the interface side, Samsung added a kind of fast application bar at the bottom of the screen, similar to what we know from computer operating systems, for opening and quickly switching between applications.

From our brief initial experience with this feature, it is very convenient.

The ability to perform more actions on the external screen has been improved.

Let's talk a little about the hardware in both devices, and some technical data.

In terms of the body, these are probably the most durable devices released in the series.

The lid, the body, and the improved hinge are made of hardened aluminum that Samsung calls Armor Aluminum, and a Victus Plus gorilla glass cover on the external screen and the back of the device (in Fold 4).

Both devices, both the Flip and the Fold meet the IPX8 standard for water resistance, so even if you use them in the rain, they will not be damaged.

In the Fold 4 you will find a 7.6-inch AMOLED 2X screen that was already presented in the previous generation, with a high resolution of 2176 x 1812 pixels and a refresh rate of 120 Hz.

The external screen is a 6.2-inch screen, also with a 120 Hz refresh rate.

The front camera on the external screen is a 10 megapixel camera with an aperture key of f1.8 and a pixel size of 1.22 microns.

The front camera on the main screen is a subscreen camera of only four megapixels, the same aperture key but with 2 micron pixels.

The processors, in both devices by the way, are as expected the current crème de la crème: the Snapdragon 8+ Gen 1 Mobile Platform, with an eight-core processor produced in 4 nm technology, which is currently among the most advanced on the market, and a clock speed that reaches up to 3.2 GHz, with an improvement in lifetime Battery, according to Qualcomm's own announcements.

In terms of storage and memory configurations in the Fold 4, you will get 12 gigabytes of memory in all models and in terms of storage, you can choose between 256, 512 and 1 terabyte of storage, which of course, will cost you quite a bit (see prices below).

In the miscellaneous department, we note that the fingerprint sensor is also the power button, the device supports Nano SIM and eSIM and there is no slot for an external memory card, and it will come in four colors - greenish gray, black, beige and burgundy red.

The operating system is Android 12L - the special Android version for tablets and large screens, which is certainly an interesting departure, and we will expand on it in a review that will be published here soon.

The weight - 263 grams, a little lighter than the previous generation by a few grams.

And for dessert - the Fold 4 will also come with a new S Pen and additional functions.

Although the pen will be sold separately, it will be included as part of a set of gifts that those who order in advance will receive.

And what about the Flip 4?

It has also undergone upgrades.

The external screen of the Flip 4 has been increased a little more to 1.9 inches. (Photo: Walla! Technology, Yanon Ben Shoshan)

The processor as I recall is the Snapdragon eight plus Gen.

The battery is a 3,700 mAh battery, split in two in both parts of the body.

It will come in lilac purple (a shade we thought was stunning), graphite, rose-gold and blue.

This is joined by additional colors in the more expensive BeSpoke edition, allowing for different color combinations.

And how much does the pleasure cost?

Similar to its announcements in previous years, alongside the two foldable devices that probably take most of the spotlight, Samsung is also announcing today (Wednesday) two wearable computing items: new headphones and a new version of the Galaxy Watch, the Galaxy Watch 5.

The main change in the Galaxy Watch 5, which will come in two versions, is the disappearance of the physical dial, which was, at least in the eyes of the writer of these lines, a great interface and something that really differentiated Samsung's watches.

They promised us it would pop up again, one year yes, one year no - we'll have to see.

The innovations in the watch are a more accurate sensor than the previous generation of the Galaxy Watch 4 that includes EKG and blood pressure measurements, a more protected sapphire crystal display for the first time in Samsung watches, along with a 13 percent larger battery.

Hits like body composition tests from the previous generation are of course also here.

The expensive, larger and tougher Pro version is intended for athletes who go off-road.

The new Galaxy Buds2 Pro headphones have been redesigned and look great.

The processor has been upgraded to 24-bit sound processing, and strong noise cancellation.

Along with support for new codecs and surround sound in a proprietary standard that comes from the sound brands that Samsung acquired as part of the purchase of Harman.

They will come in three colors (graphite gray, white and lilac purple). The price in Israel will be NIS 799. 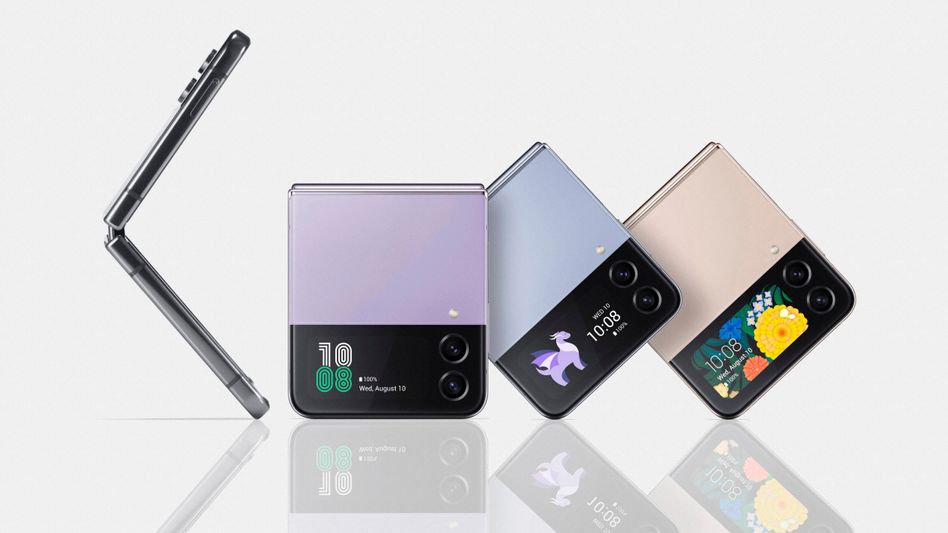 Viral on the net: more according to the announcement - Samsung mocks the new iPhone - voila! technology

"You're almost there": Samsung decided to go down on Apple, but mainly embarrasses itself - voila! technology 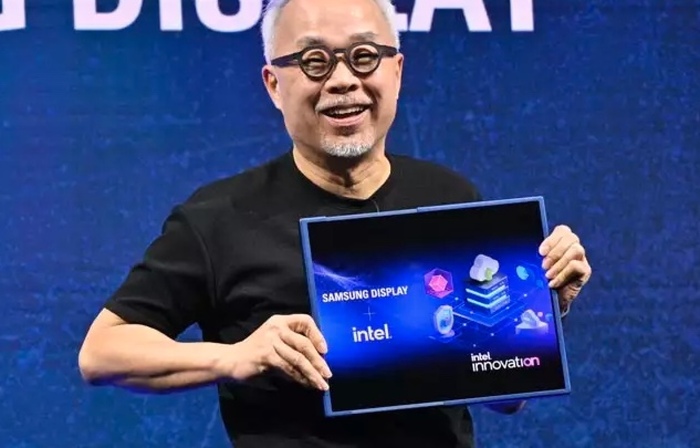 From Samsung and Intel the prototype of a "rollable" laptop 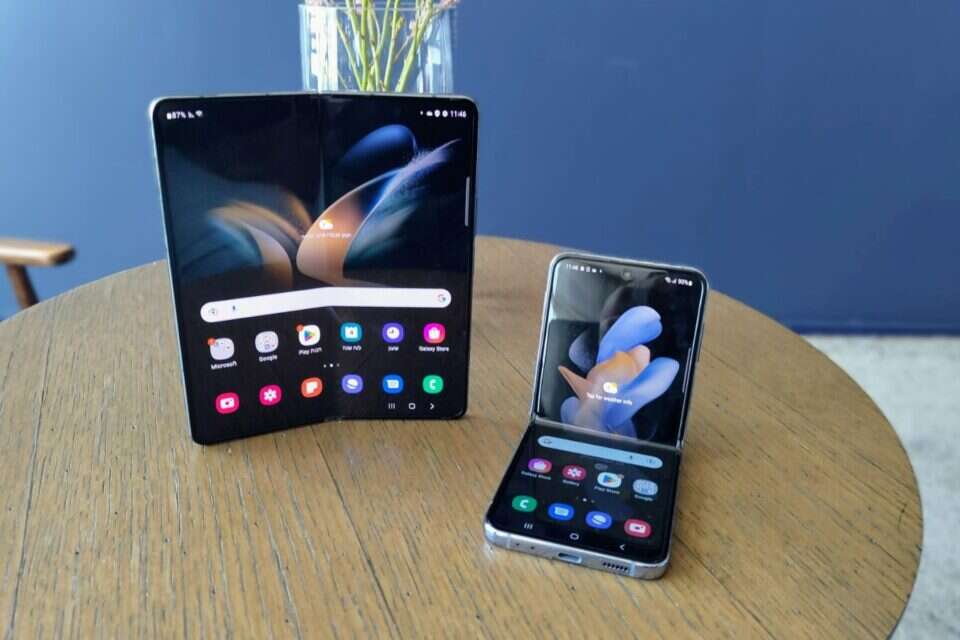 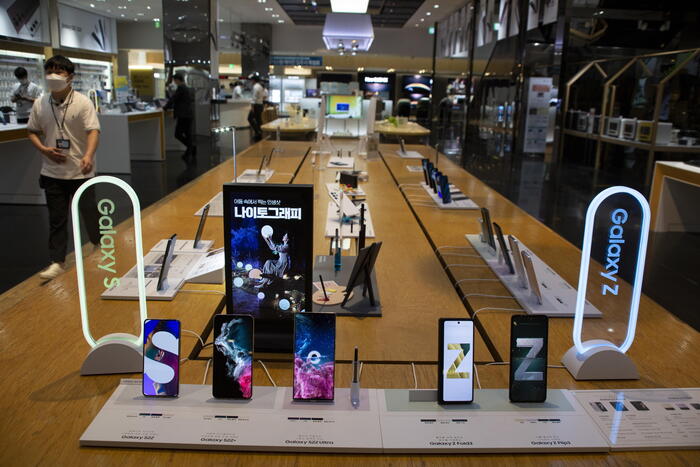