LinkedIn: Manager reports with tearful selfie how difficult it is for him to be laid off

The boss of a US marketing company has earned a new nickname with a single LinkedIn post: "The crying CEO". He is now admired on social media, but above all mocked. 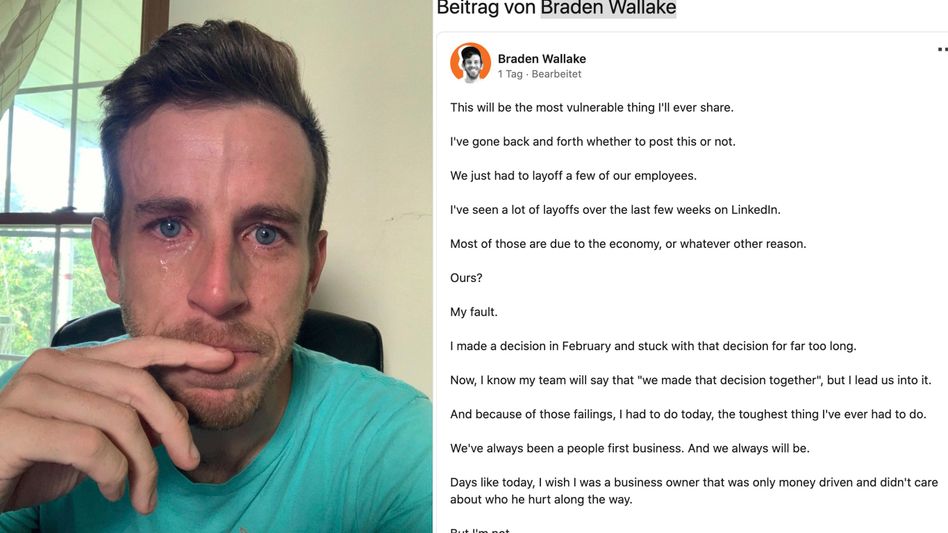 Braden Wallake has not been a network star so far.

But many postings by the managing director of the American online marketing agency HyperSocial met with little interest.

That changed by Wednesday at the latest – with a single social media posting on Tuesday evening, German time.

Since then he has been known as "The crying CEO" - and suddenly people from all over the world are talking about him.

Wallake is laughed at and criticized online, but also praised for his courage and openness.

If you want to see for yourself what caused the excitement, you have to head to the business network LinkedIn , on which its company HyperSocial specializes.

Where millions of people are looking for new jobs and contacts and like to brag about their work successes, Wallake's most acclaimed contribution to date can be found.

In it he describes how bad it feels for him that his company has to lay off employees - as part of a wrong decision for which he feels responsible.

At the end, Wallake inserted a selfie that shows him crying.

"This will be the most vulnerable thing I will ever share," Wallake begins his contribution.

"I've been debating whether or not to post this." He then reports on "a few" layoffs and says, "On days like today, I wish I was a business owner just looking for money and who doesn't care who he hurts." But that's not how he is.

It's about "that people see that not every CEO is cold-hearted and doesn't care if he or she has to fire people".

"I know it's unprofessional to tell my co-workers I love them," Wallake wrote.

"But I hope from the bottom of my heart that they know how much I love them."

Since the publication of this article, there has been a heated debate on the Internet, and of course also on LinkedIn itself, as to whether Wallake's handling of the subject of layoffs is exemplary, understandable, embarrassing or even despicable.

On Reddit, for example, this comment gets a lot of approval: "The dumbest thing in the world is people who pause to take a picture while they're crying." Another Reddit user comments: "When I saw that, I couldn't believe it at first how embarrassing this person is, but LinkedIn is full of this crap every day.«

On LinkedIn, a woman who allegedly recently lost her job herself wrote that she would probably lose her mind if the post was from her boss.

you still have your job

Imagine if we all posted pictures of us crying?”

Other internet users published angry parodies of Wallake's tearful selfie or clicked through his Instagram feed in search of other points of attack.

Then they poked fun at Wallake's recent adoption of a sea otter — symbolically, by donating money.

One of the dismissed responded

Braden Wallake told Vice magazine in a phone interview that his post was in response to other recent LinkedIn posts about "how horrible entrepreneurs and CEOs are who lay off their employees while they're building their third house buy it in the Bahamas or anywhere else«.

He wanted to point out "that not only greedy, rich companies are resigning employees, but that there are also normal people behind many layoffs".

Wallake also emphasized that he is currently not paying himself a salary.

Overall, there were two layoffs in his company on Tuesday, with one of them he brought the bad news himself.

One of those two people -- apparently the one who was not personally fired by Wallake -- also spoke up on LinkedIn Wednesday night.

"After reading the post my first thought was 'yeah, there's Braden being way too honest again on LinkedIn,'" wrote Noah Smith.

"Now my feelings are a mix of sadness and excitement."

It saddens him that "if you show yourself vulnerable online, you become a target for people who want to attack someone," Smith wrote, referring to all the social media posts mocking Wallake's post.

"Don't you have a better way to start your day than searching LinkedIn for people to trip up?"

At the same time, Smith reported that the excitement about the posting also had positive consequences for him: many people had contacted him to offer him help.

»I look forward to what comes next.«

LinkedIn: Manager reports with tearful selfie how difficult it is for him to be laid off Hard to watch images: what will the last day of humanity look like? - Walla! technology