A partial solar eclipse protagonist of the October sky

A partial solar eclipse will be the undisputed star of the October sky: the appointment is for the 25th of the month, when the phenomenon will be clearly visible throughout Italy (ANSA) 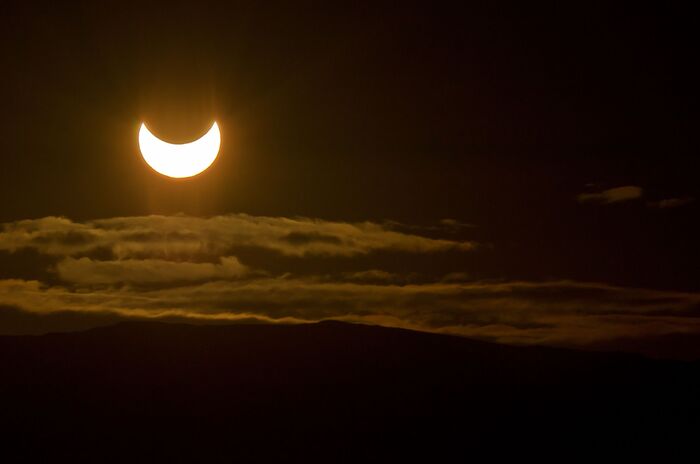 will be the undisputed star of the October sky: the appointment is for the

of the month, when the phenomenon will be

the latitude of Rome

, the eclipse will begin at

Italian time and will end at

, with 27% of the solar diameter covered, while in northern and southern Italy the show will be respectively anticipated and postponed by a few minutes.

Furthermore, at the end of the month, solar time returns into force, as the Italian Amateur Astronomers Union (Uai) recalls: clock hands moved one hour back in the night between Saturday 29 and Sunday 30 October.

, veterans of the opposition to the September Sun will still be clearly

visible for most of the night

in the autumn sky, and it will also be possible to easily admire

also comes to the fore

, which is instead approaching opposition to the Sun, and therefore the period in which we will be able to observe it in the best conditions for the current year is imminent.

The brightness of Uranus, however, is close to the limit of visibility with the naked eye, and we therefore recommend the use of the telescope to admire it easily.

The month will also be favorable for the morning observation of Mercury, visible on the eastern horizon between the first light of dawn: the best days will be 8 and 9 October.

Venus, on the other hand, comes to the end of its long period of observability: for almost the whole year it illuminated the sky before the sunrise, but this month it will become completely undetectable.

Only in the early hours of the night will there still be the opportunity to admire part of the constellations that dominated the summer sky, while those that we will see high in the sky for the following months of autumn and winter begin to appear in the East: in the late evening they will rise earlier Taurus and then Gemini.

The great quadrilateral of Pegasus is also located very high in the sky this season, almost at the zenith (i.e. on the vertical above our heads), and from its north-east vertex begins an alignment of three rather bright stars, which make up the constellation of Andromeda. Solar eclipse in October: When and where can the sky spectacle be seen?

Solar eclipse in October: When and where can the sky spectacle be seen?