Kindle Scribe in the test: You can write on this e

A Kindle as big as an iPad and with a pen: With the new Scribe you can do a lot that other e-book readers can't. Our test clarifies whether this is a good idea and what it could be used for. 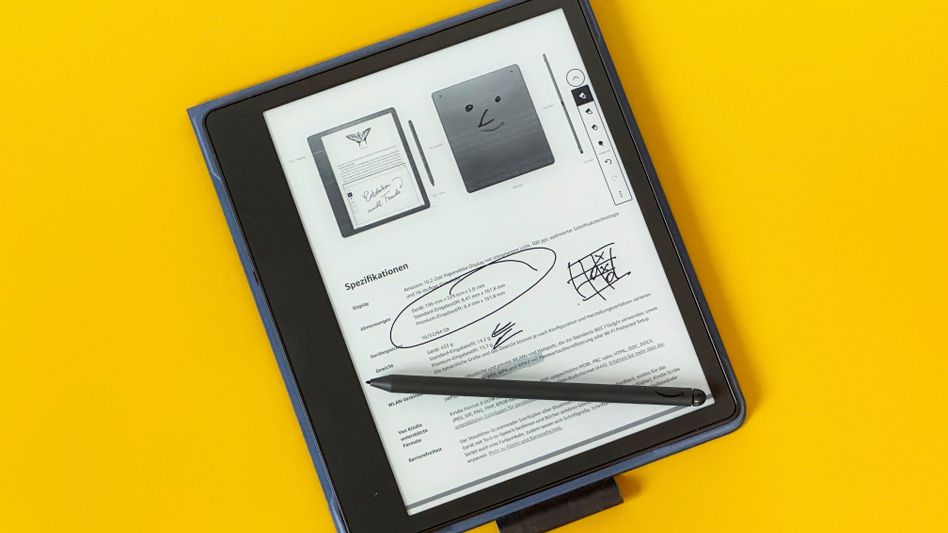 The new Kindle Scribe is huge.

At least for a Kindle or an e-book reader in general.

My Kindle Paperwhite, on the other hand, looks like a miniature.

The reason: At 10.2 inches, the screen of Amazon's new Kindle is as large as that of an iPad.

In addition, the Scribe has a grip area that is almost two fingers wide next to the display, which makes it even bulkier than Apple's tablet.

And it makes it heavier: at 433 grams, it is lighter than an iPad, but with the recommended leather case that I had for testing, it was significantly heavier: 633 grams. This is noticeable when reading, because you suddenly have so much weight again in your hand like in the old days when you still read thick paper tomes with hard covers and dust jackets.

In the long run, this becomes noticeable in the forearm muscles, especially if you like to lie down comfortably to read, as I do.

The reason for the voluminous appearance: The new Scribe is the first Kindle on whose screen you can write and draw with a special pen - and that's quite fun on the matt display.

And significantly more so than, for example, on the glossy display of an Apple iPad or a Samsung Galaxy Tab S. The surface, which is rough compared to such devices, is more like that of paper.

Even the noise when writing is reminiscent of a fountain pen scratching paper.

At first, however, the width of the lines that I could draw with the pen was too bold for me.

The thick lines were more reminiscent of what I could do with a thin felt tip pen than the lines of a ballpoint pen.

So I was forced to always write quite large, until I discovered that the pen thickness can be adjusted in five steps from "fine" to "very thick".

The surcharge for the so-called premium input pen in the basic version with 16 GB of memory seems a bit exaggerated to me.

Compared to the standard pen, the premium version I have has an additional function key, which can be used to quickly call up the »highlighter« or »sticky note« function.

It also has an eraser function that is activated by flipping the pen over like a pencil with an eraser.

If you want to write and draw a lot on the Kindle, you won't want to do without it, but you'll have to pay an extra 30 euros.

The premium pen is included with the models with 32 and 64 GB, which cost up to 450 euros.

What does a Kindle need a stylus for?

Now you may ask yourself what you need a pen for in an e-book reader.

Amazon has two answers: The simple one is the ability to easily make notes in the books you are reading.

It's true that Kindle e-readers have been able to make comments about what you've read for ages, but until now they always had to be typed in using the on-screen keyboard.

This is possible on the e-ink displays, but not everyone likes it because these screens react relatively slowly.

You can now do this by hand on the Scribe if that suits you better.

You have the choice of either marking text passages and assigning them a note or - using a menu floating to the right or left of the screen - attaching digital sticky notes anywhere in the text, which are then symbolized by small icons.

Both versions of these notes on the text are of interest to anyone who works a lot with literature, such as students.

All the notes on a book can be sent to an e-mail address as a PDF file.

The second variant of using the pen are digital notebooks.

18 different templates are stored on the Scribe for this purpose, from the appointment calendar to variants with different lines, squares and dots to music paper.

These notebooks can also be sent by e-mail, but only in PDF format.

Conversely, Amazon's "Send to Kindle" function can be used to send image files, PDF documents and Word files to the Scribe and edit them there with handwritten notes, similar to an iPad.

In the ad, Amazon writes that one battery charge is enough “for months of reading and weeks of writing”.

That sounds fantastic until you read the fine print.

There it is specified that the battery will last up to twelve weeks if you only read for half an hour a day, set the screen to medium brightness and turn off the WLAN module.

When writing, the endurance is reduced to three weeks under the same starting conditions.

At least: That's the equivalent of 42 hours of network-independent reading and 10.5 hours of writing.

That should be enough even for frequent readers to rarely have to think about where the power supply is.

Incidentally, you won’t find one in the box, the Kindle only comes with a cable from USB-A to USB-C.

During my test I didn't even need that.

Although I used the Scribe extensively, read a lot on it and scribbled some mostly unnecessary notes, it still showed more than 50 percent battery capacity after five days.

With the ability to write on it by hand, Kindle Scribe takes a step closer to the ideal of digital paper.

What companies like Paperlike try to do with matte foils on the iPad is already built in here: a matte screen whose rough surface conveys a paper-like writing feel when writing with the pen.

Due to the new function, but above all due to the large format, the Scribe can hardly be compared to other Kindles.

There is no such thing as the feeling of holding a thin paperback in your hand.

The size and weight are more reminiscent of a magazine, which also means that digital magazines are easier to read on them, as are user manuals in PDF format.

The combination creates a new category of Kindle, which is both a digital notebook and a working tool for anyone who works with literature, annotates text or, for example, takes notes to condense content during study.

For the price of the cheapest Kindle Scribe - $400 - you could buy almost three Kindle Paperwhites.

Or spend a little more and buy a ninth-generation iPad with a stylus and install the Kindle app on it.

Expand areaWhich products are reported on in the Netzwelt section?

We decide for ourselves which products we report on in the Netzwelt and which we test or not. We do not receive any money or other consideration from the manufacturer for any of the test reports.

If they are already available in stores or online, in some cases we purchase products at our own expense.

The exceptions are review copies of games and long-term loans: For example, we have game consoles and smartphones in the editorial office that we are allowed to use for a long time.

For example, review copies are often collected at the end of a year and sold at a company flea market, with the proceeds being donated to charitable causes.

Some of them are also donated directly to charitable organizations.

DER SPIEGEL always bears the costs for trips to events, regardless of whether they take place in Germany or abroad. This also applies if, for example, a company takes over the travel planning due to short-term appointments.

Events to which we travel at our own expense include the Ifa, CES, E3 and Gamescom trade fairs, developer events such as Google i/O, WWDC and Build and events from companies such as Apple, Google, Microsoft or Nintendo.

At conferences such as the Chaos Communication Congress or the re:publica, we usually get free press tickets, like other press representatives, because we report on the conference and are not traditional participants.

If a user visits one of these shops via such a link and makes an online purchase there, DER SPIEGEL receives a share of the sales in the form of a commission, but never the author individually.

This commission is paid by the retailer, not the manufacturer of the product. 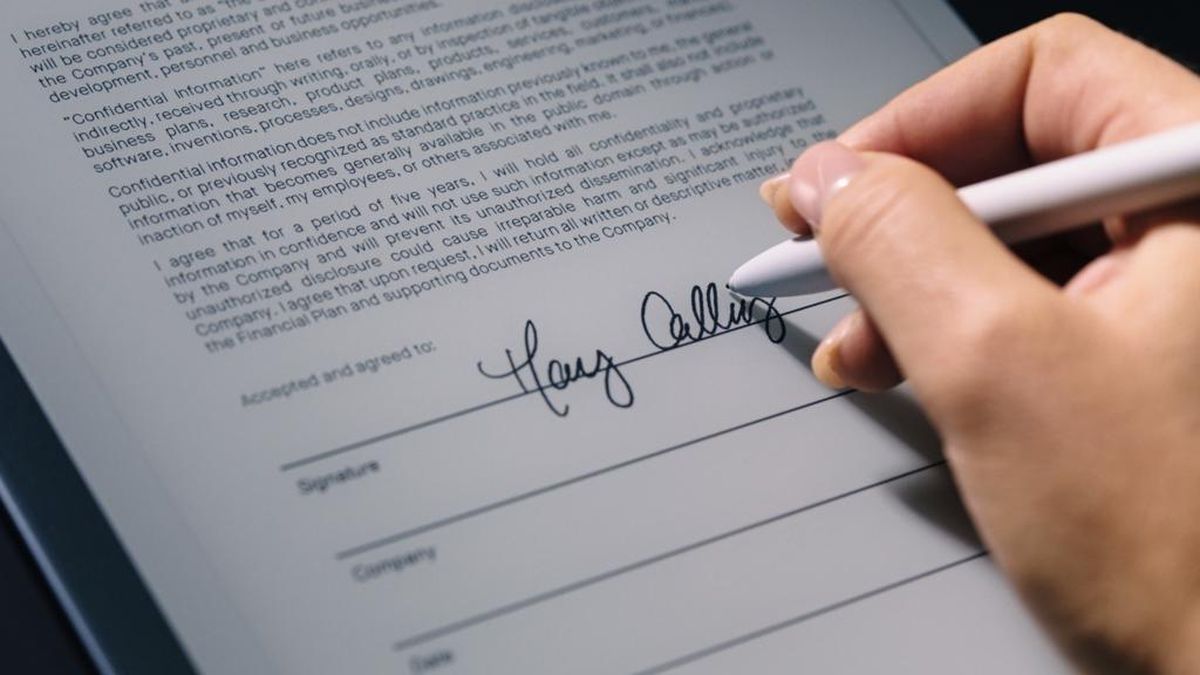 Beyond the iPad: why electronic ink is consolidated as an alternative to tablets 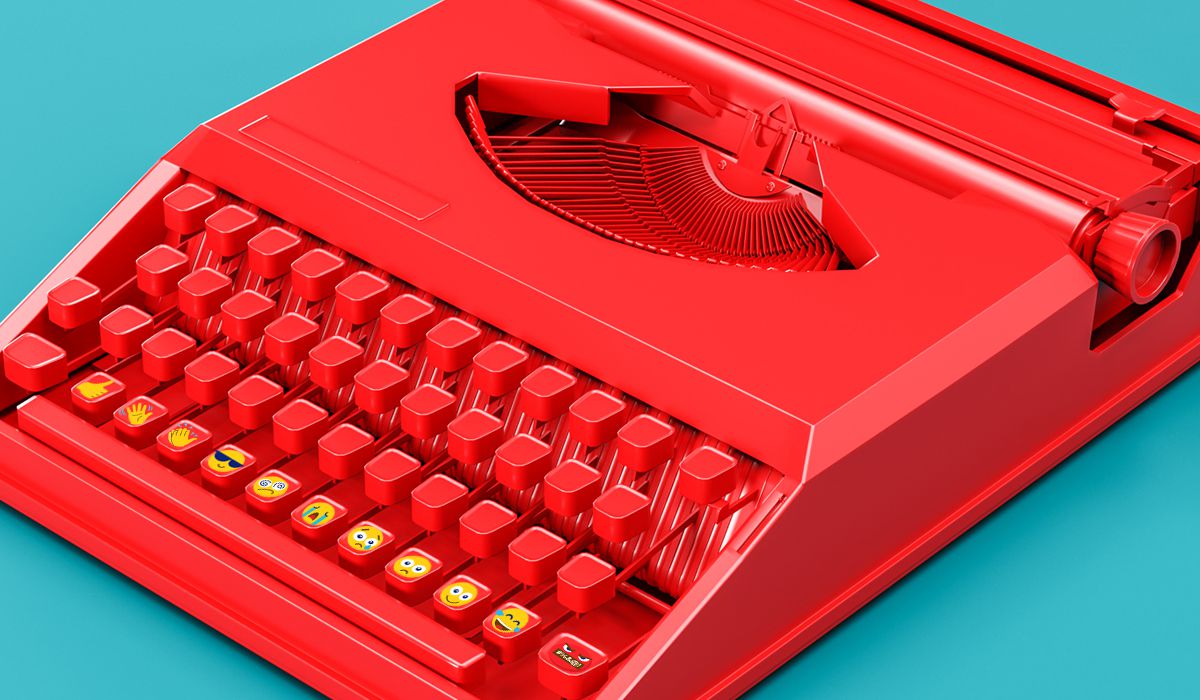 The lucrative comeback of handwriting: how the technology that killed it wants to bring it back 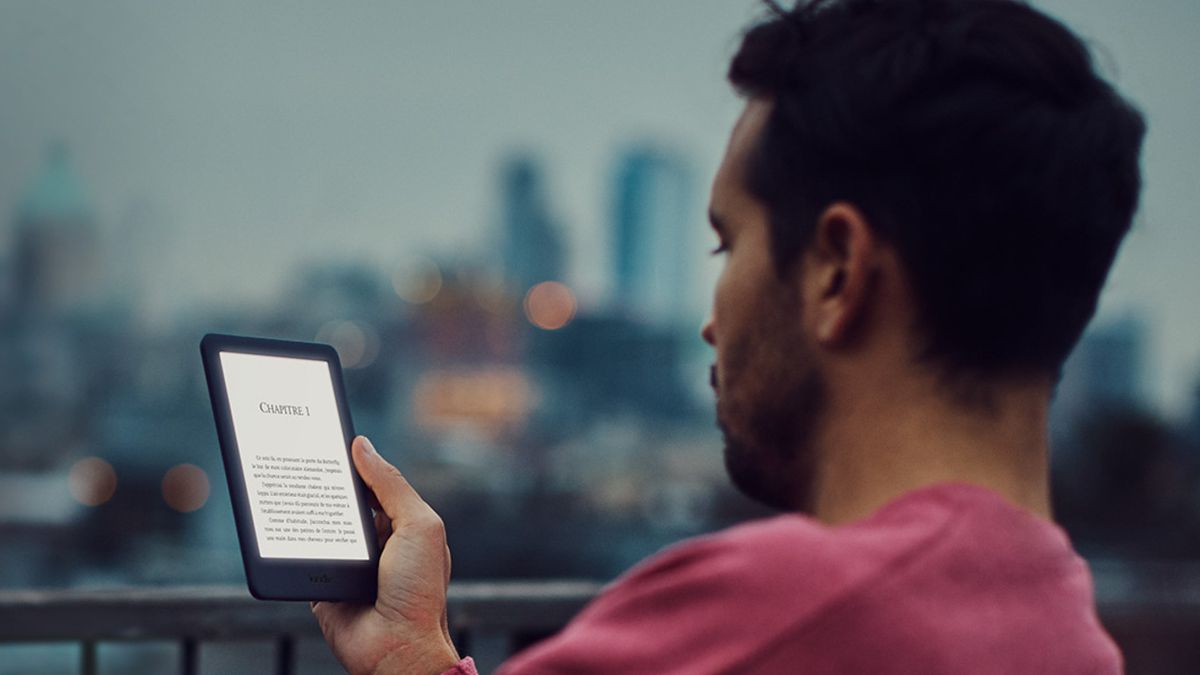 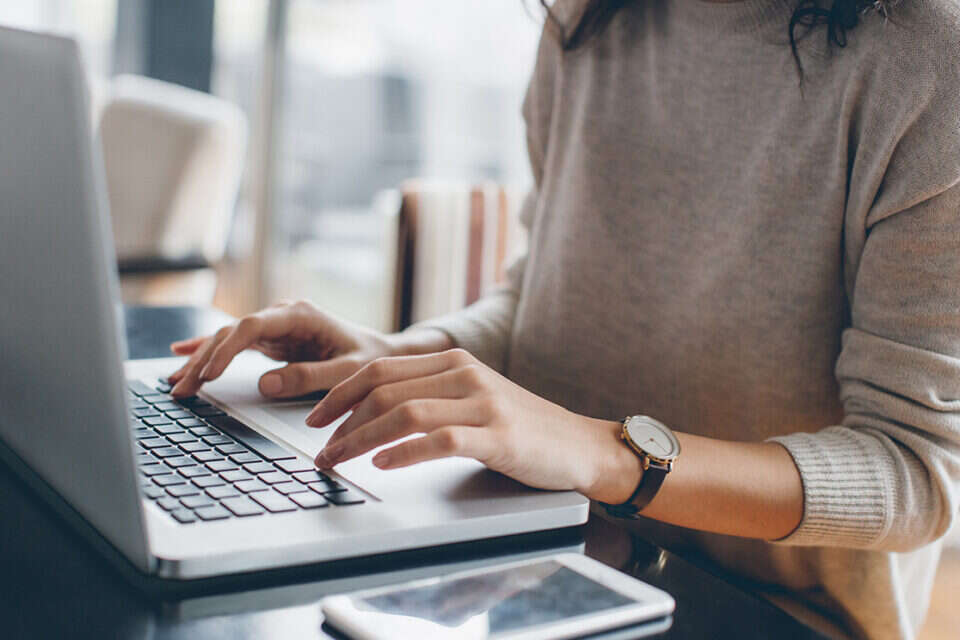 Online help: the digital tools that will improve your studies Israel today 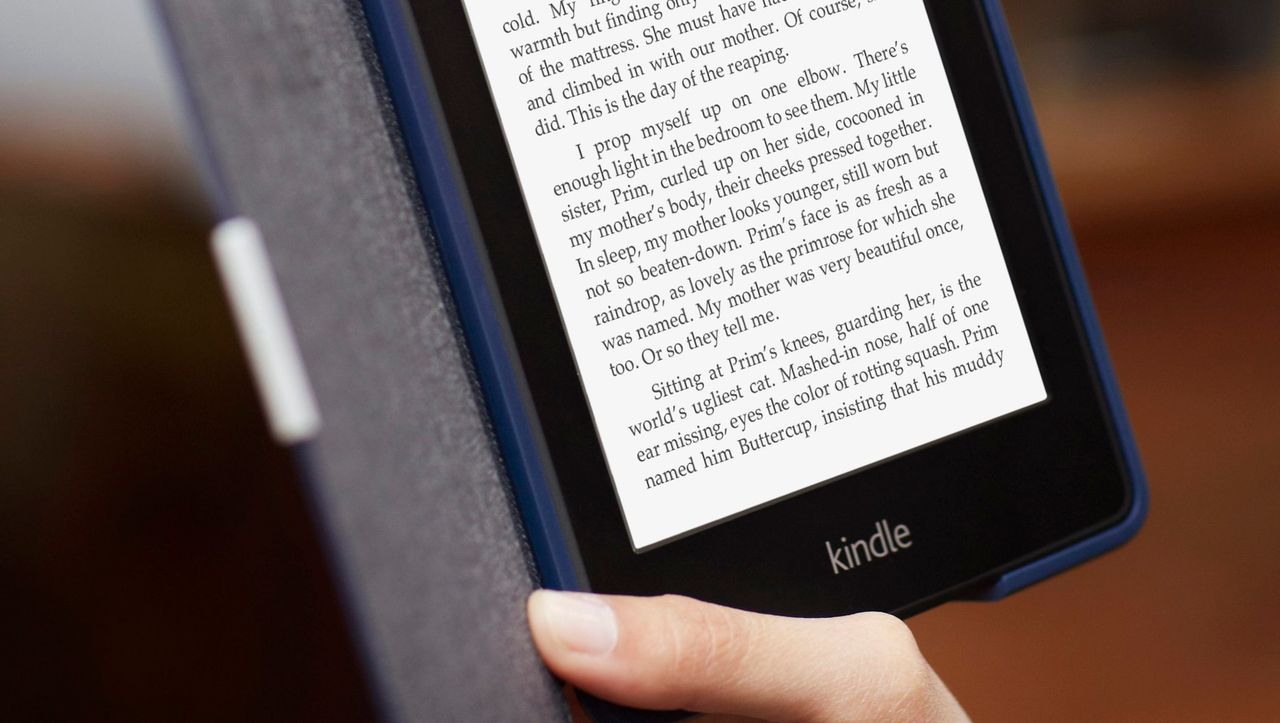 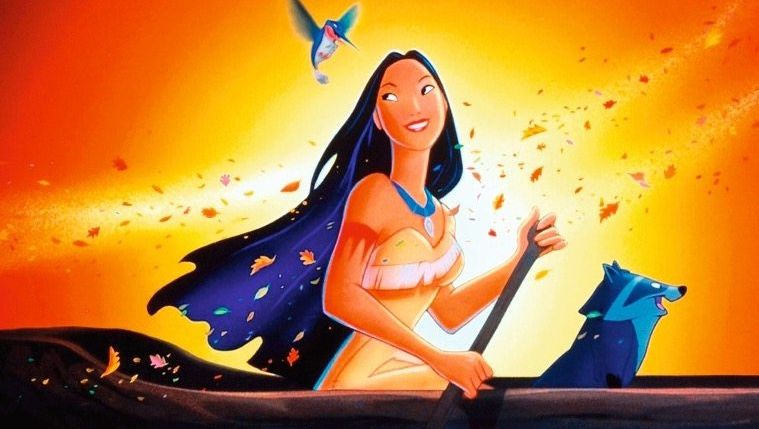 (S+) Pocahontas - the true story behind the Disney film: Clash of Civilizations 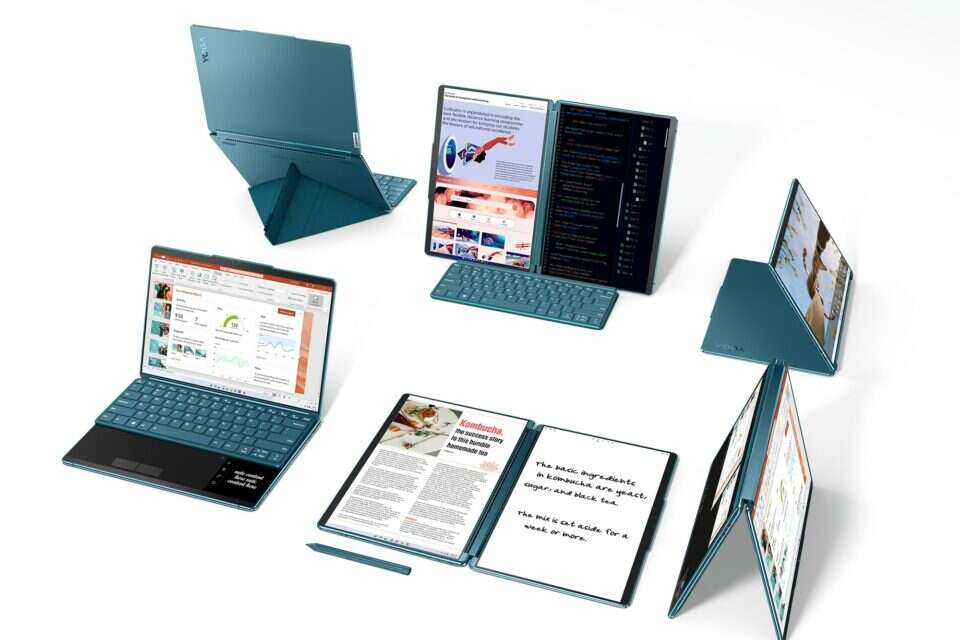