There is no plate tectonics on Mars, but earthquakes are common. How can that be? Two scientists have found the cause. It's thousands of kilometers across. 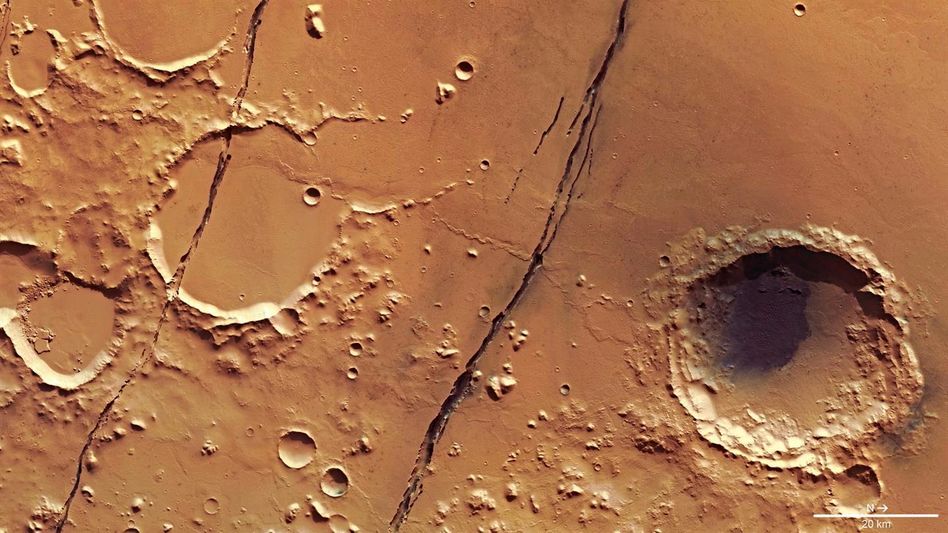 Cerberus Fossae Trench System on Mars: The reason for some tremors comes from deep inside the planet

The NASA probe has registered hundreds of tremors since landing on Mars in 2018, once the ground shook for 90 minutes.

But how is that even possible?

There are no moving tectonic plates on Mars.

This plate tectonics regularly leads to earthquakes on earth.

However, she cannot explain the tremors on the red planet.

Now two US researchers want to have found a cause for some of the mysterious tremors, they report in the journal "Nature Astronomy".

It lies on the so-called Elysium level and measures a full 4000 kilometers in diameter.

In this zone hot rock from the depths of the planet's mantle penetrates to the surface - a so-called plume.

For their analysis, the scientists had combined all available data about the Elysium plane.

"Mars was volcanically and tectonically active mainly for the first 1.5 billion years of its history," say Adrien Broquet and Jeffrey Andrews-Hanna of the University of Arizona.

"But there has been recent volcanism and seismic activity in the Elysium Planitia in particular."

There was apparently volcanic activity there as recently as 53,000 years ago.

Since there is no plate tectonics on Mars - in contrast to Earth - "volcanism and tectonic activity on a cooled Mars is unexpected," the two planetary researchers report.

In search of an explanation, Broquet and Andrews-Hanna constructed a detailed model of the region.

They factored in the surface features of Mars, as well as elevation profiles and gravity anomalies measured by spacecraft orbiting the planet.

The best explanation of all the dates: In the Elysium Planitia lies a huge mantle plume.

This is what geologists mean by a zone where hot rock flows up from a planet's deep mantle.

When the rising rock meets the planet's solid outer shell - called the lithosphere - it spreads out and the plume takes on a mushroom-like shape.

Such mantle plumes are also known from Earth and are the cause of “hotspot volcanism”, which is not bound to the borders of continental plates.

The head of the plume beneath the Elysium Plane is about 4,000 kilometers in diameter, the researchers say, and is between 96 and 285 degrees warmer than surrounding rock.

The center lies exactly under the Cerberus Fossae graben system and thus provides a natural explanation for the most recent volcanism in the region, as well as for the marsquakes registered by »InSight«, according to the researchers.

"The evidence we found of an active, large mantle plume poses a challenge to our understanding of the thermal evolution and internal dynamics of Mars," the scientists continue.

So far nobody has expected a plume on Mars.

It is also apparently not the only explanation for earthquakes on Mars.

Further tremors can also be explained by tensions in the planet's crust.

Overall, the studies show that Mars is geologically more active than assumed.