Brussels, SANA- The European Union called on the Turkish regime today to reverse all its unilateral decisions taken in The European Union called on the Turkish regime today to reverse all its unilateral decisions regarding the Cypriot region of Varosha since last October.

And the Italian Aki news agency quoted the European Union’s High Representative for Security and Foreign Policy, Josep Borrell, as saying in a statement issued on behalf of the member states that “the Union condemns and rejects all the unilateral steps announced by Turkey on July 20 regarding the reopening of the closed Varosha area on the island of Cyprus.” “.

The statement affirmed the Union's adherence to the UN Security Council resolutions related to this region and considering any settlement of the situation of this region without its residents as unacceptable, noting that the Europeans hold the Turkish regime fully responsible for what is happening in the Varosha region and demand Ankara to lift all restrictions imposed on the movement of UN peacekeeping forces in that region. Region.

The statement stressed the need for the Turkish regime to refrain from any unilateral and provocative measure that would obstruct the settlement of the status of the island of Cyprus, divided since 1974 under the umbrella of the United Nations and in accordance with its resolutions.

In Athens, Greek Prime Minister Kyriakos Mitsotakis, after his meeting with Cypriot President Nicos Anastasiades, called for a serious condemnation of the new illegal Turkish regime's actions in Cyprus.

Mitsotakis stressed that the Erdogan regime's actions "violate UN resolutions and undermine the efforts of the UN Secretary-General to find a solution to the issue of the division of Cyprus."

The announcement by the President of the Turkish regime, Recep Tayyip Erdogan, regarding the opening of the city of Varosha during his visit to it on the 20th of July, angered the European Union and several international parties, and called for the holding of consultations for the UN Security Council to reaffirm the importance of settling the island's status under the UN umbrella.

The Turkish regime's army has occupied the northern part of Cyprus since 1974, when it invaded the north of the island and established the "Turkish Republic of Northern Cyprus", the entity recognized only by Ankara.

The Varosha region, which was described as the jewel of the Mediterranean, has remained deserted and surrounded by barbed wire since the Turkish invasion, and Turkish forces partially reopened it on the 8th of last October, which sparked international criticism. EU threatens Turkey with sanctions in the Cyprus conflict 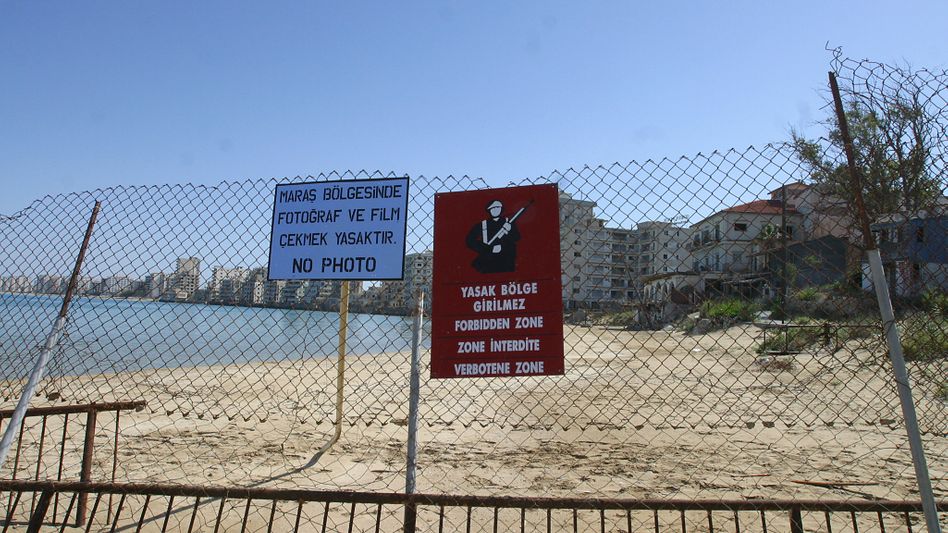 Cyprus: International outrage over Erdoğan's plans with the ghost town of Varosha

Turkey condemns threat of EU sanctions in the Cyprus conflict