Mouth and nose protection is disappearing more and more from our everyday lives. The EU health authority no longer even recommends wearing it on the plane. What that means for your next vacation.

Flight passengers with masks (in August 2020): Where does what apply now?

The packing list for vacations currently always has one entry marked in bold: the small to medium supply of protective masks that is necessary when traveling during the pandemic.

Can we soon tick this point off completely without having thrown a bag of FFP2 or surgical masks in our hand luggage and suitcase?

In any case, the aviation security agency EASA and the EU health authority ECDC no longer recommend compulsory wearing of masks in airports and airplanes.

What does that mean for the summer vacation or for the spring trip to your favorite city?

Answers to the most important questions.

Is it now compulsory to wear a mask on all European flights?

Despite the EU recommendation: masks are still mandatory on planes to and from Germany

With the relaxed EU recommendation, the mask requirement is far from being abolished on all flights.

Europe's largest low-cost airline Ryanair has published a list of 15 EU countries in which national laws still require the wearing of masks to prevent corona.

Among them are important holiday destinations such as

The mask requirement to protect against corona infections also applies to flights to and from Germany.

According to the Federal Ministry of Health, this applies to all machines that take off or land in Germany.

FFP2 or medical masks must be worn during boarding and disembarking and throughout the flight.

You can only lose it by eating and drinking.

Children under the age of six are exempt from the obligation.

The ministry explained that the mask requirement also corresponds to the new EU recommendations.

In which countries is it already possible to fly without a mask?

, there has been no longer a corona mask requirement in public transport since Monday – neither on buses, trains and taxis nor on planes.

have sealed the end of the mask requirement on planes.

The Scandinavian countries have been more relaxed about the topic for a long time.

Scandinavian Airlines (SAS) has been allowing maskless passengers on board flights between Scandinavian countries since mid-October.

On April 4, the airline lifted the mask requirement for all SAS flights – with the exception of flights to and from China and Italy.

The Norwegian airline Norwegian has been giving its passengers a choice – also since the beginning of April – whether they want to wear a mask or not.

– and with it the Finnish airline Finnair – has already lifted the mask requirement.

, masks no longer have to be worn on public transport, including on planes.

The Lufthansa subsidiary Swiss gradually lifted the obligation to wear masks on board for passengers and crew members from April 1.

However, it still applies, as described above, on flights where the rules of the destination country require the mask on board.

"Passengers will be informed of the applicable regulations before departure," says a statement from the airline.

airline British Airways also writes on its website: "Depending on the guidelines of your destination, you may have to wear a mask on board or when disembarking from the aircraft." Passengers are asked to find out about the rules before departure - there is one for that Table of countries requiring masks.

How are German airlines reacting?

In Germany, a nationwide mask requirement applies in airplanes until September 23 – this is what the Infection Protection Act provides for.

"Therefore, medical or FFP2 masks currently have to be worn on Lufthansa flights," says a spokeswoman for Germany's largest airline.

However, the Lufthansa Group longs for the end of the mask requirement on board.

"It's time to rely on voluntariness, as is now the norm in other areas of daily life, such as in the supermarket or restaurant," says a company spokeswoman.

Travel more consciously: how to go on holiday without a guilty conscience? A podcast by Lenne Kaffka

For Wolf Kindt, spokesman for the Federal Association of the German Aviation Industry (BDL), it is also “incomprehensible why the obligation to wear a mask continues to apply on the plane”.

Aircraft are "equipped with very efficient ventilation systems that exchange the cabin air every two to three minutes".

In addition, the air is cleaned by highly effective HEPA filters;

they are able to very reliably filter viruses, bacteria and other suspended matter from the air.

"The risk of infection on airplanes is therefore low," says BDL spokesman Kindt, "especially compared to most other areas of life and work where the mask requirement has already been lifted".

Wearing a mask at airports has not been mandatory since April.

However, many German airports prefer to play it safe and continue to ask travelers for “support” in fighting the pandemic.

"Hamburg Airport is doing everything to prevent the spread of the corona virus," says the Hamburg airport operator's website.

"Wearing a mouth and nose cover is still recommended in the terminals of Hamburg Airport."

Cilento instead of the Amalfi Coast, Marche instead of Tuscany: Italy as hardly anyone knows itBy Dela Kienle

Germany's largest airport in terms of passenger volume points out that wearing a mask for self-protection and the protection of fellow human beings is "sensible".

"This applies in particular to the areas in which distances cannot be maintained for a short time." This includes above all the check-in area, the passenger checkpoints, the gates, the baggage claim as well as the passenger buses and the Sky Line train between the terminals 1 and Terminal 2 commutes.

Munich Airport also writes: "Especially in areas where many air travelers come together, such as at check-in or at the security check, we urgently appeal that air travelers wear a medical or FFP2 mask." Keep your distance, pay attention to hygiene and wear a mask – all of this helps to reduce the risk of infection.

Even if there is no longer a legal obligation to wear masks within German airports, it still seems to be good advice to continue to protect yourself and others with a mouth and nose cover.

Because airports are places where people meet who come from different directions.

And last but not least against the background that the air at airports - unlike in airplanes - is not cleaned with high-performance filters, but air conditioning systems are in use, as the airport association ADV confirmed to SPIEGEL on request.

Where it was necessary, the fresh air supply was increased, said association spokeswoman Isabelle Polders.

Why is the tourism industry still struggling with the mask requirement?

The mask requirement in Germany, which extends beyond the summer, is a nuisance for the tourism industry: "This leads to a patchwork of regulations when traveling in Europe that no traveler understands and can understand anymore," says Norbert Fiebig, President of the German Travel Association (DRV).

According to a DRV statement, the travel industry is pleading for uniform regulations in Europe, as advocated by Federal Transport Minister Volker Wissing (FDP).

She calls on the federal government to implement the EU recommendations and to lift the mask requirement for flights in Germany “so as not to dampen the burgeoning desire to travel again”.

Relaxing holidays in Tenerife: In search of the formula for doing nothingBy Philipp Laage, Tenerife

It is the specter of the airlines, but also of other companies in the tourism industry, that the German citizens lose their desire to be on the move.

Are the worries justified?

Not at all from TUI's point of view.

"2022 will be a good business year with a strong travel summer," said Fritz Joussen, CEO of the world's largest travel group, last week.

After the corona virus and pandemic-related travel restrictions practically stopped the group's business two years ago and then made it very difficult for a long time, things are now clearly looking up again.

For the summer, Joussen expects almost as many holidaymakers as in the pre-crisis year of 2019. "The need to travel and the desire for relaxation is definitely back among Germans," DRV boss Fiebig emphasized in March.

What's so bad about flying with a mask?

Many people would probably answer this question briefly: There is nothing wrong with wearing a mask on a plane for a few hours if you are doing something good for your own health and that of others.

Fraud on the booking portal: The shattered dream of a villa bargain by Jenny Dreisenbach

However, Wolf Kindt from the BDL aviation association replies: "Many passengers find wearing a mask annoying, especially on medium- and long-haul flights that last several hours." they are allowed to fly with other airlines and with transfer connections via non-German hubs without a mask".

Kindt also senses “a significant distortion of competition” – which makes it clear that economic interests should play no small role in the calls for the end of the mask requirement on airplanes.

The BDL also sees potential for conflict and extra work for the crews in the masks.

"The inconsistent situation regarding the obligation to wear masks is currently causing uncertainty and annoyance among passengers and is leading to increased conflicts on board the aircraft, which have to be resolved by the flight crew," writes association spokesman Kindt when asked by SPIEGEL.

The “understandable lack of clarity” among passengers is mainly caused by the different regulations in the individual countries (home country, destination country, transfer country) and at the places visited.

He refers to the fact that masks are no longer compulsory in restaurants and retail, for example, at the airport, but on the plane it is.

He would welcome it if the airlines were no longer “obligated to monitor and enforce the obligation to wear masks on board”.

Data from the United States suggests that wearing masks – or failing to do so – could have caused a lot of unrest on planes over the past year.

A statistic from the state aviation authority FAA testifies to thousands of so-called "unruly passengers" (in German: unruly passengers) who disregarded or broke rules on the plane in the past year.

Accordingly, in 2021 there were almost 6,000 reports of conflicts on board.

According to the information, almost 72 percent of the cases had to do with masks.

The phenomenon has not been publicly confirmed for Germany.

Lufthansa does not comment on the question of mask-related disputes on board. 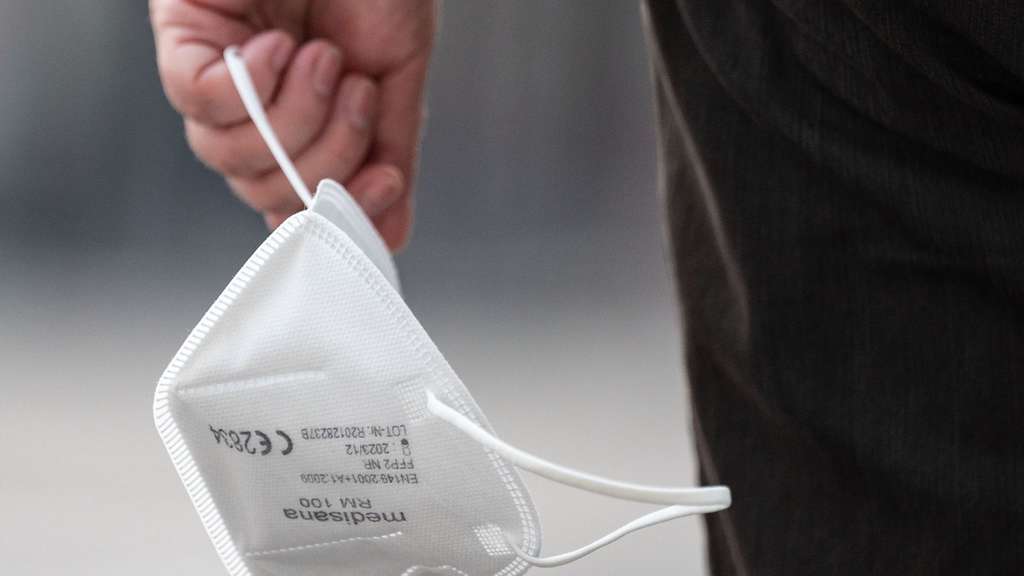 When and where will the mask requirement end in 2022?

When and where will the mask requirement end in 2022? Mask requirement in means of transport remains: “patchwork of regulations that no traveler understands anymore”

Mask requirement in means of transport remains: “patchwork of regulations that no traveler understands anymore”

Corona virus: going on vacation by plane – mask or not?