Is a turning point imminent in the triangle between China, the USA and Taiwan?

But that hardly means real relaxation.

The military announced on Wednesday that regular combat readiness exercises would continue to be held in the region.

So are fighter jets, missiles and warships part of the new normal in the Taiwan Strait?

Taiwan had already responded to China's maneuvers with its own exercises - and is likely to continue to do so.

Coinciding with the end of the military exercise, Beijing also released a lengthy white paper entitled "The Taiwan Question and China's Reunification in the New Era" on Wednesday, which aims to outline Taiwan policy in the era of President Xi Jinping.

"We will work for peaceful reunification with the utmost sincerity and with all our strength," says the paper, which also promotes the "development of exchanges and cooperation" with Taipei.

But Beijing wouldn't be Beijing if it didn't keep threatening to use force.

However, this violence is "in no way directed against our fellow Chinese citizens in Taiwan," the paper said.

In doing so, Beijing rhetorically separated the population from the allegedly divisive government: "We will only be forced to take drastic measures

Apparently, despite all the anger in Beijing, the visit of the Speaker of the US House of Representatives, Nancy Pelosi, to Taipei was not such a red line.

Still, "Beijing sees Pelosi's visit to Taiwan as part of a US policy shift toward overt support for Taiwan independence and a retreat from the long-held position of 'strategic ambiguity,'" says Valarie Tan of the Merics Institute for China Studies on

"This has strengthened China's resolve to step up efforts to reunify Taiwan."

So is the triangle between China, Taiwan and the USA threatening to “turn the tide”?

The US and China accuse each other of shifting the decades-old status quo across the Taiwan Strait.

From Washington's point of view, Beijing has been increasing the level of threats to Taiwan for years, thereby shifting the balance.

Beijing, on the other hand, has seen tendencies towards more independence since President Tsai Ing-wen took office in Taipei in 2016.

Today she emphasizes that she wants to stick to the status quo - but that doesn't seem to convince Beijing.

Especially since Taiwan is currently experiencing growing popularity from the West: Parliamentarians from the EU or the USA are traveling to Taipei again and again, and Washington has promised new arms deliveries.

US President Joe Biden recently even pledged military support for Taiwan in the event of a Chinese attack.

From China's point of view, the status quo has already in fact shifted as a result of all this, political scientist Mingxin Pei from Claremont McKenna College in the USA recently wrote: "It is difficult to say at what point the new status quo became unbearable for China." An important point was Tsai's re-election in early 2020 - coupled with the defeat of the traditionally China-friendly nationalist party KMT.

Are maneuvers the "new normal" on the Taiwan Strait?

In the Taiwan conflict, as in other cases of territorial integrity, China likes to argue on the basis of history.

Ambassador to the United States Qin Gang, for example, wrote in an op-ed for the

: "In 1943, the leaders of China, the United States and Great Britain issued the Cairo Declaration, which clearly stated that all areas belonging to Japan Chinese had stolen, including Taiwan, should be returned to China.

The Potsdam Declaration of 1945 reaffirmed that the conditions of the Cairo Declaration would be met.” The information is correct, but all that was a long time ago.

However, Qin then goes back to 1971 and thus to the events that led to the current situation.

The "Republic of China" lost its seat at the United Nations as a result of Resolution 2758.

"UN General Assembly Resolution 2758 of 1971 recognized that the representatives of the government of the People's Republic of China are China's only legitimate representatives at the United Nations," Ambassador Qin wrote.

And not only since Pelosi's visit to Taipei has Beijing repeatedly warned the USA to adhere to the so-called "Three Communiqués", which are considered the cornerstone of diplomatic relations between China and the USA established in 1979.

For example, the first document after Nixon's visit to Beijing in February 1972 states: "The United States recognizes that all Chinese on both sides of the Taiwan Strait adhere to the belief that there is only one China and that Taiwan is a part of China “.

The US government will not question this position

The other communiqués vary the topic.

The crux from today's perspective: In 1971, the authoritarian government under Chiang Kai-shek in Taipei also laid claim to the whole of China.

Only with the beginning of democratization did Taiwan give up this attitude.

And only then did the idea that there could also be “one Taiwan” become relevant at all.

Taiwan and China: dispute over the wording of old declarations

Conversely, according to Western experts, Beijing has been trying to change the narrative for some time.

In addition, Beijing is publicly reinterpreting the old documents in its favor.

China is persistently working to "twist the original text of UN Resolution 2758 in such a way that it is interpreted as equivalent to its 'one China principle'," writes Bonnie Glaser, director of the Asia program at the German Marshall Fund think tank in Washington.

It spreads the "misconception that the resolution has led UN member states to conclude that Taiwan is part of the PRC."

By convincing enough states of Beijing to accept this view, China has managed for decades to exclude Taiwan from any participation at the United Nations.

There are always enough countries that agree with Beijing - as shown, for example, by Taiwan's unsuccessful attempt to at least get observer status at the World Health Organization (WHO).

The West, however, never really tried to integrate Taiwan in any way.

If western support continues to rise, Beijing's red line may be reached at some point.

The trips to Taiwan by members of parliament from other countries and by the Vice President of the European Parliament, Nicola Beer, allowed Beijing to get away with the usual criticism.

But Nancy Pelosi is number three in the US political hierarchy;

your visit has a new quality.

So China reacted with more than just words: sanctions against products from Taiwan and against Pelosi himself, cyber attacks against Taipei, a halt to important dialogue formats with Washington and the large-scale maneuvers.

"The military drills were designed to coerce and intimidate," says Valarie Tan.

The sanctions against spokeswoman Nancy Pelosi and the suspension of cooperation and talks are meanwhile intended as punishment.

"Beijing wants to show that it is taking concrete action to match its angry rhetoric -- and to demonstrate to both domestic and international audiences a determination to hold Washington accountable for Pelosi's challenge."

But the next needle prick from Washington is already imminent.

A bill to improve relations with Taiwan, the “Taiwan Policy Act”, is on the table in the US Senate.

The draft law "would upset China-US relations," the

quoted US expert Lu Xiang of the state-affiliated Chinese Academy of Social Sciences as saying in early August.

"I think the consequences would be extremely serious." There is currently no sign of relaxation, especially since the USA has already announced the next course of action. "We are not afraid": Taiwan's foreign minister affirms that the island will face the "most serious" threats from China 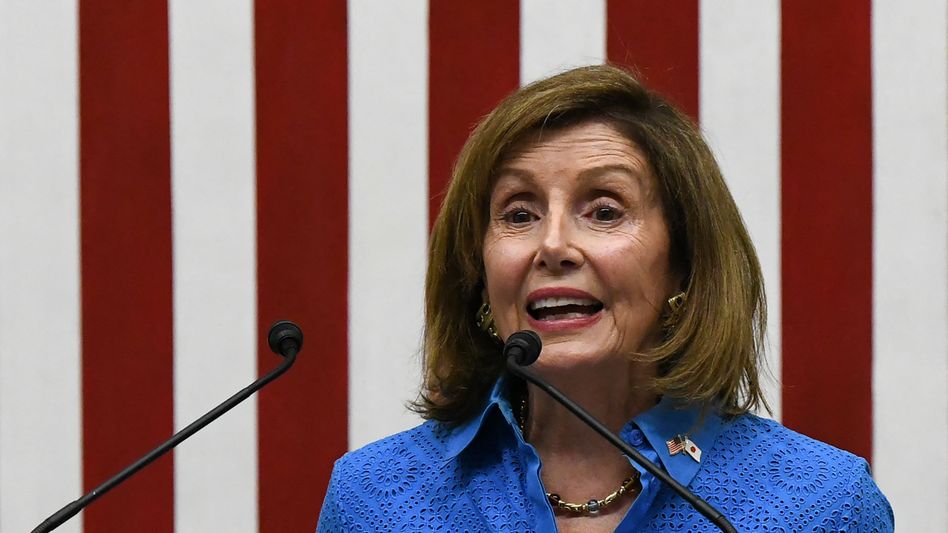 After Pelosi's departure from Taiwan: is an era of tension looming?

Taiwan Crisis: Are China and the US Leading the World With Seeing Eyes Into the Abyss?